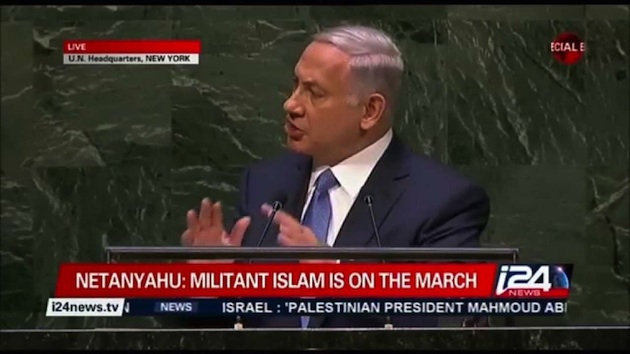 “I’ve come to speak on behalf of my people, the people of Israel,” Netanyahu said. “I’ve come here to expose the brazen lies spoken at this podium against my country, and against the brave soldiers who defend it.”

The Israeli prime minister wasted little time in criticizing the United Nation’s for ignoring evidence, enabling the terror group’s tactics and even contributing to the rise of anti-Semitism around the world.

“By investigating Israel rather than Hamas for war crimes, the UN Human Rights Council has betrayed its noble mission to protect the innocent,” Netanyahu stated.

The latest Israeli-Palestian conflict began in June when officials made a grim discovery, locating the bodies of three previously kidnapped Israeli teens in shallow graves in the West Bank. The kidnapping is now largely believed to be a provocation by Hamas, who was suffering financially from a joint Israel-Egypt crackdown on a blockade in the Gaza Strip. The network had been used by Hamas to smuggle weapons and human trafficking aimed at raising ransom money, among other activities. In July, Israel launched an offensive to end what became a constant barrage of rocket fire from the Gaza Strip and even Lebanon into Israeli cities.

Israel took an unprecedented amount of criticism over the attacks, despite taking enormous measures to limit civilian casualties. PPD also confirmed in July that the Gaza interior minister, as well as Hamas itself, had told Palestinians to ignore Israeli evacuation warnings in an effort to run up civilian casualties.

“By granting international legitimacy to the use of human shields, the UN’s Human Rights Council has thus become a Terrorist Rights Council,” he said.

Prime Minister Netanyahu criticized what is either hypocrisy or equally dangerous global ignorance to the nature of the threat from Islamic extremism, and to what would be a more serious threat from a nuclear Iran.

“Last week, many of the countries represented here rightly applauded President Obama for leading the effort to confront ISIS,” Netanyahu said. “And yet weeks before, some of these same countries, the same countries that now support confronting ISIS, opposed Israel for confronting Hamas. They evidently don’t understand that ISIS and Hamas are branches of the same poisonous tree.”

Netanyahu also spoke to the rise of anti-Semitism across Europe that was on full display during the conflict. Swastikas, the abhorrent symbol of the Jew-purging Nazi regime, could be seen at protests throughout France, Britian and even a rally in Washington D.C.

“The Human Rights… that’s an oxymoron, the UN Human Rights Council, but I’ll use it just the same, the Council’s biased treatment of Israel is only one manifestation of the return of the world’s oldest prejudices,” Netanyahu said. “We hear mobs today in Europe call for the gassing of Jews. We hear some national leaders compare Israel to the Nazis. This is not a function of Israel’s policies. It’s a function of diseased minds. And that disease has a name. It’s called anti-Semitism.”

The Israeli people, quite strikingly, overwhelmingly supported the prime minister’s handling of the Hamas conflict. The discovery of a vast network of “terror tunnels” has been a game-changer for Israeli public opinion.

“The people of Israel pray for peace. But our hopes and the world’s hopes for peace are in danger,” Netanyahu said.

He went on to warn that even though Islamic extremists “all share a fanatic ideology,” Iran remains a greater threat than the Islamic State. He said a nuclear Iran “would pose the gravest threat to us all.”

“Iran’s President Rouhani stood here last week, and shed crocodile tears over what he called ‘the globalization of terrorism.’ Maybe he should spare us those phony tears and have a word instead with the commanders of Iran’s Revolutionary Guards, the prime minister said.

Iran has long been a leading state sponsor of Islamic terrorism, supplying much of the rocket inventory to Hamas, while sending in al-Qaeda militants to fight and kill U.S. troops in Iraq, which have now evolved into the ISIS threat Rouhani now supposedly weeps over.

“That’s your moderate,” he said. Netanyahu issued an eery warning to nations who are “fooled by Iran’s manipulative charm offensive,” and may be persuaded to “lift the sanctions and remove the obstacles to Iran’s path to the bomb.”

“Once Iran produces atomic bombs, all the charm and all the smiles will suddenly disappear. They’ll just vanish,” he warned. “It’s then that the ayatollahs will show their true face and unleash their aggressive fanaticism on the entire world.”

“To defeat ISIS and leave Iran as a threshold nuclear power is to win the battle and lose the war.”

Netanyahu: Defeating ISIS While Leaving Iran Nuclear Power 'Is To Win The Battle And Lose The War'