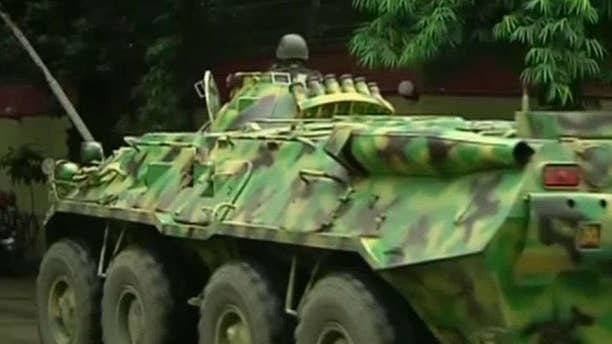 The State Department has confirmed one U.S. citizen was “senselessly murdered” in the Islamic terror attack on a Bangladesh restaurant that left 22 dead. Several armed Islamic terrorists armed and shouting “Allahu Akbar” detonated explosives and took multiple hostages at the Dhaka café Holey Artisan Bakery. Hostages in the crisis were tested on their knowledge of the Koran and those who passed were allowed to eat, those who failed were killed.

Bangladesh’s Prime Minister Sheikh Hasina condemned the attack while pledging to stand up and fight terror “at all costs” after the attack. Prime Minister Hasina declared two days of mourning following the attack on the restaurant.

“We are committed and determined to uphold or freedom,” he said.

At a news conference, Army Brigadier General Naim Asraf Chowdhury said most of the victims “were killed mercilessly” by the Islamic militants with sharp weapons. He did not provide further details on the weaponry used.

The Islamic State (ISIS) claimed responsibility for the attack at an upscale restaurant in the capital of Dhaka, the terror group’s Amaq News agency said. Bangladesh has seen a significant increase in Islamic terrorist attacks since 2015. ISIS last November called for attacks in Bangladesh in an article published in Dabiq, its online magazine.

Prime Hasina has cracked down on domestic radical Islamists and his government has accused local terrorists and opposition political parties–specifically the main opposition Bangladesh Nationalist Party and its Islamist ally Jamaat-e-Islami–of being behind the violence with the aim to destabilize the nation.

Meanwhile, Emory University also said two of its students were among the 20 killed. Abinta Kabir and Faraaz Hossain were taken hostage and subsequently murdered, Emory President James Wagner said in a statement Saturday on the university’s website. Wagner said Kabir was from Miami and was in Dhaka visiting family and friends. He said Hossain just graduated and was enrolled in Emory’s business school for the fall.

“The Emory community mourns this tragic and senseless loss of two members of our university family,” Wagner said. “Our thoughts and prayers go out on behalf of Faraaz and Abinta and their families and friends for strength and peace at this unspeakably sad time.”

Italian Foreign Minister Paolo Gentiloni, as well as the Japanese government, had reported early on that they had unaccounted for nationals. In total, 9 Italians and 7 Japanese nationals were also killed in the siege.