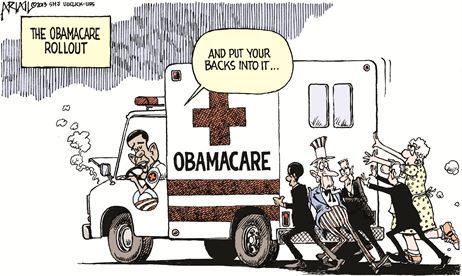 Since the no-so epic 2012 Election Day defeat, in which the GOP ran away from Obamacare for obvious reasons, many conservatives have been shouting at the top of our lungs for a message change.

U.S. President Barack Obama pauses during a town hall meeting with young African leaders at the University of Johannesburg Soweto on Saturday, June 29, 2013, in Johannesburg, South Africa. The president is in South Africa, embarking on the second leg of his three-country African journey. The visit comes at a poignant time, with former South African president and anti-apartheid hero Nelson Mandela ailing in a Johannesburg hospital. (AP Photo/Evan Vucci)

As he mulls whether or not to do more damage than he has already done as it relates to the NAACP request, President Obama should consider how the American people’s assessment of his leadership have fallen to their lowest level in over a year of regular tracking. President George W. Bush cautioned against criticizing gay couples, saying in an interview on “This Week” that you shouldn’t criticize others “until you’ve examined your own heart.” He also weighed in on immigration, the NSA scandal – which he defended – and President Obama’ handling of the whole ordeal.

Governor Chris Christie: Obama ‘can’t figure out how to lead’

Governor Chris Christie was touting his conservative credentials, twice touting himself as a “conservative Republican” and taking a shot at President Obama within the first 10 minutes of a town hall meeting in Sussex County.

No ‘Progress’ for Obamacare: Americans Still Uninsured and Unaware of Mandate

The vast majority of Americans, 81%, say they are aware of the Obamacare (ACA’s) requirement that most Americans must carry health insurance or pay a fine. Americans who are currently uninsured – which ironically are those most directly affected by the mandate – apparently weren’t paying much attention to the healthcare debate when the monstrosity was passed. The uninsured are much less likely to be aware of the provision, with 56% saying they know about it and 43% saying they are unaware.

President Barack Obama’s presidential approval rating is still tanking, and in the new Fox Poll it is continuing its upside-down decent, but there are three reasons for the precipitation in Obama’s approval rating. Overall, Obama’s approval rating is underwater by 8%, as 43% of voters approve and 51% disapprove of his performance. The implications from these recent numbers are far-reaching for the next generation of conservatives burdened with the task to rebuild a party with national appeal, capable of building a majority coalition.

We’ll need all of our citizens to do our part to preserve God’s creation for future generations.

From the onset of the revelations regarding