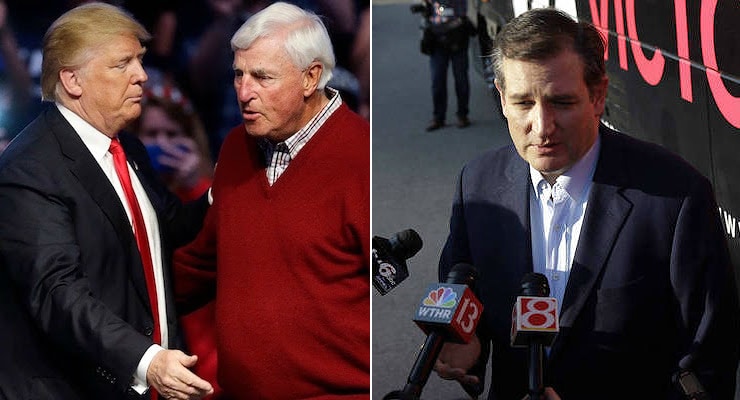 Donald Trump, left, was joined by former Indiana University coach Bobby Knight at a rally in Indianapolis on Wednesday, April 27, while Sen. Ted Cruz, right, takes questions from the media before a rally at the Johnson County Fairgrounds in Franklin, Ind., Monday, April 25, 2016. (Photos: AP/Michael Conroy)

Worth noting, these numbers are almost identical to the results of internal campaign polling from the Trump campaign. They are also in stark contrast to a IPFW/Mike Downs Center for Indiana Politics poll showing Sen. Cruz leading by 16 points. As PPD explained, the samples were not weighted, at all, and the interviews began on April 13. No information was provided for the results regarding the corresponding days, which makes it impossible to identify a trend in either direction.

“Like I said, the Cruz campaign doesn’t even believe they are leading and admit they once had a lead,” said PPD’s senior political analyst Richard Baris. “It was never as large as that poll suggested. We never think it’s a good idea to dismiss any poll as an outlier outright, but I am more than skeptical to say the least. Now that we have more reliable pollsters releasing data, one that has shown a propensity to underestimate Donald Trump’s support, it’s safe to assume it was an outlier.”

Overall, Sen. Cruz trails Mr. Trump by a much smaller margin on the PPD average of polls. However, recent news of the Cruz-Kasich alliance isn’t going over very well with Republican primary voters in The Hoosier State, as 58% say they disapprove of the two “teaming up in Indiana and doing everything possible to beat Trump.” More than a fifth (22%) said it impacted their inevitable decision.

Mr. Trump is also the second choice for nearly a fifth (18%) of primary voters, which would put him over the 50-percent threshold. That undercuts the oft-made claim and narrative pushed by the Cruz campaign and pundits, which argued Mr. Trump would lose in a one-on-one matchup. PPD has never subscribed to that rather statistically impossible scenario and, in fact, has pushed back on it the entire cycle.

Sen. Cruz had hoped a last-minute endorsement from Indiana Gov. Mike Pence would give him a head of steam going into Tuesday, but his overall approval rating is only 43%. Further, Gov. Pence didn’t exactly give the Texas senator a ringing endorsement, spending the first half of the interview praising Mr. Trump for talking about the impact immigration and trade have had on jobs.

As PPD previously reported, The Hooiser State has bled manufacturing jobs during the period impacted by the North American Free Trade Agreement and the World Trade Organization. Mexico and China, two countries repeated cited by the frontrunner, have been top benefactors of that economic exodus.

While Mr. Trump hopes to put the Republican nomination to bed by defeating Sen. Cruz in Indiana, his rivals are hoping to deny him the 1,237 delegates needed to clinch the nomination. As we’ve seen in previous states, at least as of late, primary voters still believe he should get the nomination if he fails to secure the majority. A whopping 64% of GOP primary voters in Indiana say the “candidate with the most votes in the primaries” should get the nod.

Mr. Trump surpassed Mitt Romney in the popular vote following his five-state sweep last week and is now on track to blow past the record set by former President George W. Bush in 2000.

There are 57 delegates up for grabs in the Indiana Republican Primary on Tuesday May 3. While it’s not a must-win for Mr. Trump–though it would make his path significantly easier–it has become the last stand for Sen. Cruz and the anti-Trump forces.

“This is it,” Baris said. “No matter what you hear on Tuesday or maybe even Wednesday morning. If The Donald beats the senator on Tuesday, there are those previously loyal to the #NeverTrump movement that have told us it will be time to pack it in. If Sen. Cruz doesn’t recognize that, then all he will be doing is helping to elect Hillary Clinton.”

Baris also said that there hasn’t been the alignment of the political stars akin to what took place in Wisconsin, where Sen. Cruz was able to pull off a win and buy himself a few more weeks. However, weeks before the primary there was a measurable movement toward Sen. Cruz, which has not been the case in Indiana. In fact, the trend has been moving against him.

“He’ll have a difficult decision to make if he can’t pull off an upset.”