UPDATE: Poll will updated daily by 2:00 PM EST Think Big Media is Corrupt? So, Help Us Fight It!

The People’s Pundit Daily U.S. Presidential Election Daily Tracking Poll began on July 3, 2016 and will run until the presidential election in November, with updates posted by 12:00 noon EST. More details about the poll–including the questionnaire–under Methodology below the polling table.

Due to the number of requests, we are adding more data–including demographic vote shares and the number of repeat respondents (when applicable) per sample–to the tables. The PPD Presidential Election Daily Tracking Poll follows level 1 AAPOR standards of disclosure and WAPOR/ESOMAR code of conduct.

The People’s Pundit Daily U.S. Presidential Election Daily Tracking Poll is not sponsored by or affiliated with any political entity, party or organization. It is an independent survey funded by subscriptions and individual donations to PPD; fieldwork is conducted in-house. 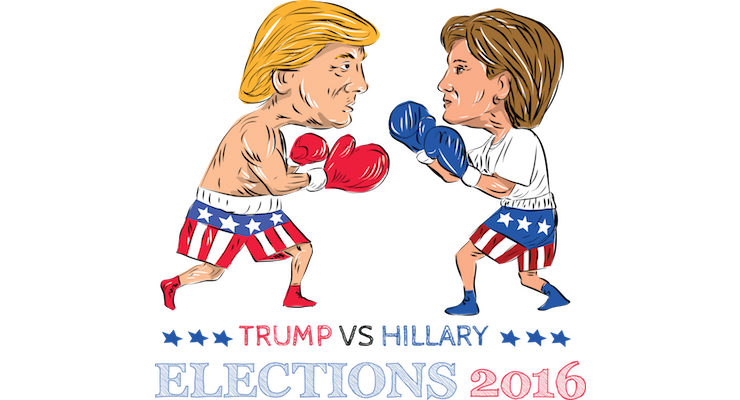 First round of PPD Battleground State Polls for release on Wednesday, October 25, 2016 at 6:00 PM EST were conducted from October 20-24. Top lines for all, but detailed crosstab data will be available only to subscribers.

The survey’s daily results (for those posted on 7/29/16), were based on interviews conducted via Internet panel nationwide and vary daily (400+ target). Top line results for the first day represented a rolling weekly average, or the last seven days, and results will now represent a three-day average. Interviews were NOT conducted on Independence Day (July 4). The number of respondents will grow throughout the cycle and interviews are repeated.

All responses in the sample should be treated as “opt-in Internet panel” even though a percentage of respondents were specifically targeted based on registration status (more on that below in population). They are still ultimately considered opt-in and we do NOT treat them as a random sample. Respondents either received a mailer, an email, responded to social media ads or a website-based ad, or contacted us through another mode.

During screening or initial interviews, respondents are asked to give their names, contact information (i.e. email and/or phone), as well as the city and zip code where they are registered or plan to register to vote. This is so we can attempt to re-interview, to obtain regional data etc. The information is also used to verify registration status when possible (based on the state) for respondents who were not already identified.

We’ll attempt to contact a respondent for a repeat interview up to 10 times before removing them from the panel.

The top line results are of likely voters, or at least our best estimate of registered voters we view to be most likely to vote based on past voting history, enthusiasm and registration status. We do not includes respondents who report they are not registered during initial interviews in the results, but also don’t immediately remove them as a potential panelist. They may register in the future and we view them as worthy of a follow-up. We do not completely eliminate them and will follow up to reduce the probability we will exclude potential new voters.

If you’d like to inquire about participation, you can do so by contacting us through email here. We are looking to expand our panel with those who are willing to conduct repeat interviews, are of age, eligible to vote and are qualified via a screening questionnaire. Include contact information, as well as zip code and/or city and state.

The People’s Pundit Daily U.S. Presidential Election Daily Tracking Poll does not weight based on party affiliation (party ID). Polling results are weighted based on the U.S. Census Current Population Survey for demographics such age, sex, race, education and region. It uses a likely voter model based on responses to screening questions relating to prior voting history, enthusiasm and registration status etc.

The poll does oversample, but that’s primarily the result of the entire sample being of registered voters and the use of a likely voter model. The People’s Pundit Daily U.S. Presidential Election Daily Tracking Poll top line numbers do not report the results of those who answer “No, I do not” or “Not sure” to the question: “Do you expect to vote in the presidential election this coming November, or not?” We will cycle back to these respondents and attempt to interview them again at some point during the following week. Often, they change their minds and, if they do, those results are included in the sample.

Because of how we screen, the disparity is not significant.

We cannot accurately estimate a margin of error (MoE) because the sample is not a probability sample that used a random selection. Though we don’t know exactly who will and will not respond to the panel for a given day, they are still treated as opt-in. Instead, we use a bootstrap method with a standard 95% confidence interval. Admittedly, this can be a bit difficult with more than one or two choices, but we have had success in accounting for this in the past. The 95% confidence interval varies daily and will be posted along with results.

To reduce human error, we have begun to use StatKey as a basis to calculate the 95% confidence interval for candidates’ shares of the vote. We do so by generating 5,000 responses with the weighted results for the average three-day results.

The result of the People’s Pundit Daily U.S. Presidential Election Daily Tracking Poll released on Saturday July 30 marks the first time our internal polling data, which helped propel the PPD Election Projection Model to #1 in 2014, has been released for public consumption.