Why The Brief Tenure Of President Kennedy Still Matters

The 50th anniversary of the assassination of President Kennedy is being marked with a plethora of new books and documentaries. The new National Geographic documentary Killing Kennedy, broke the channel’s rating record for the most watched program, appropriately enjoying the same success as the book it was based upon.

When studying the tenure of President Kennedy at great length, one quickly realizes that the differences between public opinion and scholarship surrounding our 35th president, are vast. As is typically the case in politics and scholarship, I find it more than possible that the Ivory Tower may be blind to something the American public is not.

A recent Gallup poll found Americans give President Kennedy the highest marks out of any modern U.S. president since Dwight D. Eisenhower. If we honestly look at the history of Gallup polling on this question, then the 50th anniversary no doubt had some sway. The last time President Kennedy enjoyed the top spot was in 2000, when he surpassed Reagan, Roosevelt and Lincoln.

Since 2000, though President Kennedy consistently scores high, he has lagged behind in Gallup’s open-ended question to name the greatest U.S. president in American history. On average, the conservative standard-bearer President Ronald Reagan has enjoyed the status as the perceived greatest U.S. president, with a comfortable margin separating Reagan with Lincoln and Kennedy. Interestingly, in every Gallup survey from 2000 to 2013, President Bill Clinton has assumed the other top four slot, bumping out President Franklin D. Roosevelt.

Although his status as the only modern American president to suffer the fate of an assassins bullet helps his historically high numbers, as the Gallup trend shown below clearly shows his approval was heading into familiar territory for other U.S. presidents, the brief tenure of President Kennedy still matters. 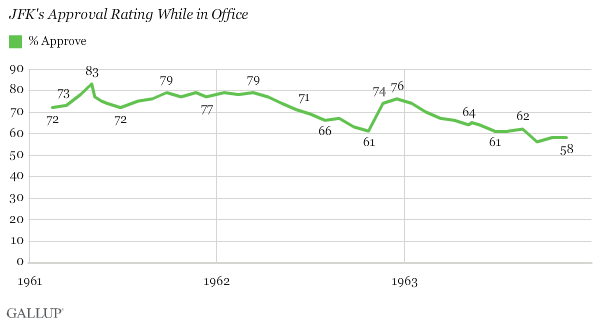 President Kennedy transformed American presidential politics, raising the standard for charisma, likability, and more familiar considerations presidential candidates before him didn’t have to concern themselves with. Yet aside from the typical, oft-mentioned lessons Americans can learn from the brief tenure of President Kennedy, there is one last lesson Camelot is burning to give the people.

Isn’t it ironic, indeed a bit suspicious, the Democratic Party leadership and talking heads have been completely silent over the anniversary of our slain 35th president?

So, why not a Cuban Missile Crisis?

Unlike his successor, Lyndon Johnson, President Kennedy had no realistic plans for a “Great Society,” nor was he as eager to let “the best and the brightest” escalate troop movements in Asia. What he did have plans to do, however, was dismantle the Central Intelligence Agency. When modern Americans think of President Kennedy, they most often remember that it was he who said, “Ask not what your country can do for you; ask what you can do for your country,” during his inaugural address on January 20, 1961.

This is a far cry from the modern Democratic Party. For the now-young, once-fresh Democratic President Barack Obama, the conditions couldn’t be more different. President Kennedy was elected by the slimmest of margins, but quickly united the American public and enjoyed the highest average approval rating throughout his brief tenure, higher than any other modern president.

On the other hand, Barack Obama was elected in 2008 by a comfortable margin, flipping red states blue and turning purple states solid blue. But Obama quickly divided our nation, winning reelection by becoming the only president to do so with a smaller margin, even unlike the man whom he shares historic lows in second term approval ratings, George W. Bush.

Unlike Barack Obama, who uses the National Security Agency to spy on American citizens, President Kennedy was planning to dismantle the out-of-control CIA and other elements to the national security apparatus, a bold plan that many believe our youngest elected president paid for with his life.

As was the case with Barack Obama, at only 43-years old many Americans were doubtful of his ability to manage a dangerous and uncertain world. However, unlike Barack Obama, President Kennedy demonstrated a hidden humbleness, which enabled him to adapt and learn from his mistakes.

Following the Bay of Pigs, when President Kennedy cut back an already limited air support that proved detrimental to the failed invasion, as well as his disastrous meeting with Nikita Khrushchev that was widely regarded as a moment of presidential weakness and naivety, Kennedy took responsibility for his failures and changed course.

When it became apparent that the “quarantine” established by the blockade during the Cuban Missile Crisis was the right call, Secretary of State Dean Rusk said, “We’re eyeball to eyeball, and I think the other fellow just blinked.” On the other, far less heavy hand, President Obama has been blinking throughout his entire presidency.

President Kennedy was also the last Democratic president who didn’t force central policy to actively harm the foundation of the traditional American family. Whether you agree with “Great Society” reforms or not, scholarship — including my own — has thoroughly proven the harmful implications they have had on family composition.

Though a Catholic, he was also the last Democratic president who didn’t actively attempt to subvert the American mainstream Protestant ethic, which has been the secret ingredient in America’s recipe for unmatched productivity and strength.

When we compare the public opinion of President Kennedy over time, as well as his actions during those brief few years as president, two considerations become apparent.

First, the modern Democratic Party is no longer the party of President Kennedy. Second, the American people do not hold the values and leadership of this new Democratic Party is such high regard, yet they seemingly haven’t come to make the connection. Perhaps that is now changing with the failure of liberalism being on full display due to ObamaCare, but the variables are there, nonetheless.

If Ronald Reagan is the standard-bearer for conservatism, then Franklin D. Roosevelt or even Lyndon B. Johnson are the standard-bearers of progressivism. Yet none of them are on or near the top of the list, with Roosevelt being dropped for the man who famously said, “the era of big government is over.” Furthermore, President Clinton is topped only by two others, one of whom is personified in his immortal proclamation, “government is not the solution to our problem, government is the problem.”

Atop them all now sits the king of Camelot, screaming an immortal, anti-modern Democratic Party philosophy that commands we all, “Ask not what your country can do for you; ask what you can do for your country.”

And for no less-significant a reason than those previously mentioned by others, for millions of Democratic voters who identify ideologically with JFK more so than Roosevelt, Johnson, and Obama, that is why the brief tenure of Kennedy still matters.

The JFK we had in myth and memory