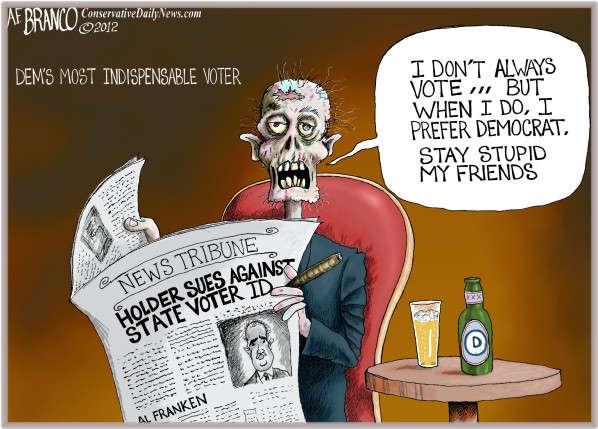 To the Honorable members of the Republican-controlled House of Representatives,

This written petition was authored to articulate and represent the position of the mighty American majority, who are firmly united in our opposition to the Voting Rights Amendment Act of 2014, in its current form.

In response to the Supreme Court decision regarding the 1965 Voting Rights Act, which was decided on June 25, 2013, proposed legislation was recently sponsored in the House by Democratic Rep. John Conyers of Michigan, joined by the author of the unconstitutional Patriot Act James Sensenbrenner of Wisconsin, and in the Democratic-controlled Senate by Judiciary Committee Chairman Patrick Leahy of Vermont, Majority Whip Richard Durbin of Illinois, and known collectivist, Democratic Sen. Chris Coons of Delaware.

This bill, in its current form, is fundamentality flawed and will further destroy the integrity of the electoral system in the United States, not protect it. The Supreme Court decision correctly noted that the decades-old formula outlined in the 1965 Voting Rights Act no longer applied upon examination of contemporary data.

While it is self-evident that unanimity exists over the need to protect all of our citizens’ fundamental right to vote in free and fair elections, sadly it is equally self-evident that clear intentions exist to perpetuate fraud and racial resentment, and that these are the perverted principles at the center of this proposal, not the admirable protection of minority voting rights.

There are several key provisions that are of dire concern to the mighty majority regarding the Voting Rights Amendment Act of 2014, which like an impostor is presently carrying the mantle of bipartisanship. The list is as follows:

A provision of the amendment renders states subject to federal pre-approval and supervision for election changes if those states have 5 or more voting rights violations over the past 15 years.

The objection of the majority is rational, because surely only the unwise and unreasonable would fail to see the ramifications of this arbitrary, and most-hollow standard. Left-wing activist and professional race-monger, Al Sharpton, is already prepared to line-up more than enough complaints to meet that arbitrary threshold, all of which no doubt will carry as much truth as the accusations levied in the Tawana Brawley case, which destroyed countless innocent American lives.

With respect to the rule of law, the end-all means of preserving our Madisonian system that justly elevates the separation of powers above political preference, for which Attorney General Eric Holder has shown complete disregard by dismissing the Black Panthers voter intimidation case, its observation and reverence cannot be guaranteed by means of this proposal.

The Voting Rights Amendment Act of 2014 allows courts to require federal oversight for states even in cases the Justice Department or private litigants cannot prove intentional discrimination at the ballot box, a blatant violation of the Tenth Amendment without legal or justifiable cause.

Citizens of North Carolina and others in their respected state governments have unnecessarily been burdened with the task of defending lawful legislation against Attorney General Eric Holder, despite the vast majority of the American people supporting voter ID laws in their current form, as proposed by the Republican Party.

Further, the amount of power granted to the lower federal courts and the Justice Department, both of which have shown a propensity to disregard precedent and the rule of law, is unacceptable.

The Civil Rights Division within the Justice Department is populated by far-left, social retributionists who under this administration have become so emboldened they outright protect and allow the “spigot” city voter fraud operations to continue, because the ends justify the means.

Nevertheless, as we can predict from the legislative language, neither the Justice Department nor private litigants will be required to prove their likely false charges valid, and as such, will rely solely upon federal justices who are unquestionably guilty of a long train of abuses and lawless judicial activism surrounding the people’s right to require voter ID to protect the integrity of their elections.

The ACLU, for example, unabashedly voiced their full intent to lobby Democratic lawmakers to make improvements to the “problematic” provision in the bill, which they claim treats voter ID laws “somewhat less seriously from other voting rights violations.”

Put simply, they plan to gut any and all legislative voter ID language to ensure that the inner-city Democratic voter fraud machine will continue undeterred, and once more without fail, the Republican Party has not the courage to stand up to this machine that oppresses our fellow-citizens, depriving them of their most basic God-given freedoms of choice and information.

The mighty majority would urge lawmakers not only to stand with and for the will of We the People and decline to support this legislation, but to speak out against such an effort to continuously divide our nation and perpetuate the greatest fraud of all, which is that the only injustice in our current electoral process stems from the countless instances of voter fraud that continuously undermines our system of representative government and our very freedom.

The American people tolerate a great deal of abuse and belittlement daily. However, to legitimize the already-dozens of illegitimate lawmakers now serving in both houses of Congress, as well as those who will serve in the future, because we did nothing to prevent the codifying of legislation that insults and causes injury to the simple principles of republicanism, would be an abomination to our beloved nation, to all those who have paid the ultimate price to defend her and the liberties once enjoyed with her existence.

The Left's Hypocrisy On Freedom Of Speech And 'Rowdy Discourse'

'Tomorrow's War' Is A War Of Ideas, And It's Time To Fight Back