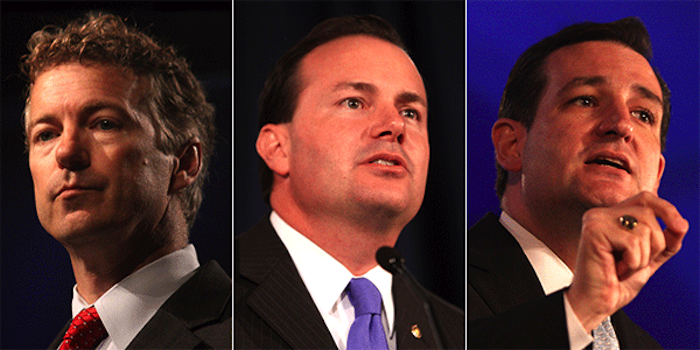 Looking at the new 2013 Club For Growth Scorecard there is little wonder why conservatives are putting up a large amount of primary challenges to leadership-backed establishment candidates. While the number of economically friendly lawmakers in Congress is currently at an all-time high, it is only do to the increased amount of true-red conservatives serving in Congress.

The mainstream media would have us believe that recent Congresses are the least-productive in modern times, but the legislative record examined in the 2013 Club For Growth Scorecard suggests that conservatives block legislation that will hurt, not help the economy.

“Some members have seen their voting records improve and will be honored this year with recognition of their efforts for the first time. While there are more champions of pro-economic growth policy serving in Congress than at any time before, it’s clear that our fight against the big spenders in both parties has a long way to go.”

In order to receive the Defender of Economic Freedom Award, which the group will give to 31 members of Congress this year, The Club for Growth required Representatives and Senators to not only score 90 or better on votes cast in a year, but to also have a “LifeScore” of at least 90.

Though the number of pro-growth lawmakers is at an all-time high, just 22 current House members received scores of 90 percent or better in 2013 who also had LifeScores of 90 or better, with only four members of Congress receiving 100 percent ratings in 2013.

Democrats have a shameful scorecard, generally hostile to pro-economic growth policies. Out of their 55 seat majority, a whopping 19 Senate Democrats actually scored zero in 2013, while every single Senate Democrat received a 20 percent or worse score, with only 3 Democrats scoring higher than 10 percent. The full Senate scorecard is below:

In the House, the situation for Democrats was slightly better. However, the 2013 Club For Growth Scorecard displays shameful GOP establishment scores.

The highest scoring Democrat was a 40 percent tie between Congressman Jim Matheson (UT-04) and Congressman Mike McIntyre (NC-07), both of whom represent conservative districts and are facing difficult reelections. Nevertheless, the two Democrats actually scored higher than four Republicans.