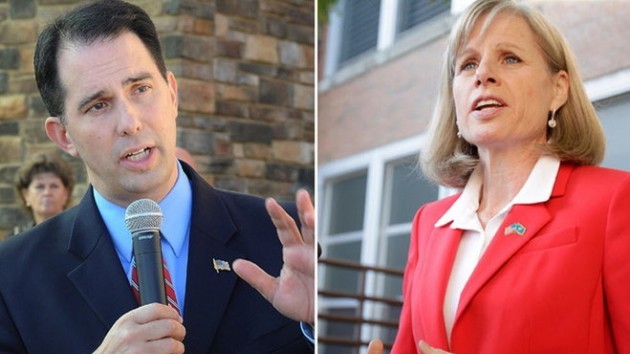 The Wisconsin Governor race is the first in what will be a succession of articles offering expanded analysis released for the PPD 2014 Governor Map Predictions. Incumbent Republican Gov. Scott Walker will face Democratic challenger Mary Burke, a former executive at Trek bicycles with a business background and personal fortune Democrats believe will make her a formidable challenger against Gov. Scott Walker.

Prior to Mary Burke entering the race, Gov. Scott Walker didn’t even have a credible opponent. In a purple-leaning state, one that is no doubt more Blue than not on the presidential level, the actions of the Democratic Party speak volumes. The failed recall effort, during which Walker won by an even larger margin than his first election, was a devastating defeat for the Wisconsin State Democratic Party.

The Republican incumbent has a big fundraising edge on his opponent, raising $5.1 million in the second half of 2013. Mary Burke, on the other hand, raised $1.4 million and has already put in $400,000 of her own money.

The first Marquette Law School Poll on the Wisconsin governor race in the 2014 election year found Gov. Scott Walker leading Democratic candidate Mary Burke 47 to 41 percent, representing a solid 5-point bump for Walker since they surveyed the race a month before.

Based on past accuracy, specifically regarding the state of Wisconsin, the Marquette Law School Poll has a stellar #1 rating for our model at PeoplesPunditDaily.com, which is the most pristine rating a pollster could be assigned by PeoplesPunditDaily.com and translates into more weighted influence when aggregating polls.

I actually believe there is a decent chance that Walker may be leading by a slightly larger margin, because all but 1/8 of the polling sample was interviewed prior to the State of the State address, which shined a media spotlight on the budget surplus following higher than expected state revenue projections. Though he has been making his rounds on national news outlets, state media didn’t cover his new tax reform plan until after the speech, which is reflected in the survey.

People feel like they are doing better with Walker, personally, and that cannot be understated.

According to Gallup, President Obama has an approval rating of 46 percent in the state, and in the Marquette Law School Poll only 44 percent approve of the president’s job performance, while 50 percent say they disapprove. The issue fueling this discontent, unsurprisingly, is ObamaCare. The fact he actually offered a plan to minimize the law’s damage, rather than simply oppose ObamaCare, is certainly helping the governor.

Walker proposed directing federal subsidies to Wisconsin’s poor and uninsured and allowing them to purchase coverage directly from the insurer, avoiding the online exchange. Walker’s idea is rapidly gaining support in the bitterly divided Wisconsin statehouse, with 6 Democrats having crossed party lines in support of Walker’s ObamaCare proposal in the assembly, sending it off to the Wisconsin Senate with large majority support.

The composition of the 2014 electorate will look more like the 2010 electorate than the one in 2012. However, interestingly enough, the 2012 electorate still would have reelected Gov. Walker. According to exit polling from the recall election and the 2012 presidential election, Walker-Obama voters — or, voters who supported Scott Walker in his recall victory and Barack Obama in the 2012 presidential election — represent at least 6 percent of the recent Wisconsin voting electorate. Worth noting, that is nearly identical to the margin Mitt Romney lost the state by in 2012.

The biggest problem Mary Burke has right now is Scott Walker’s crossover appeal. The governor seems to be keeping these ever-important Walker-Obama voters, who are otherwise predisposed to vote Democrat, in his corner. The demographics in the state have actually moved in a direction that generically benefits the Republican Party, and this has been validated by Gallup and measurements of the Partisan Voting Index.

In their annual party ID by state measurement, Gallup found a continuing slip in Democratic advantage nationwide, with Democratic states outnumbering Republican states by just 3. This is a slide from their 7-state advantage in 2012, and an evaporation of their once-30-state advantage in 2008. The Midwest states, particularly the northern region encompassing Wisconsin, Michigan, Minnesota and even Iowa, have been the driving forces behind the most dramatic rightward-shifts.

In 2014, the Partisan Voting Index is estimated by Cook to be D+2, a particularly noteworthy measurement. In 2010, Republican candidates in states where the PVI was more Republican than D+2 had an 83 percent success rate. Considering the proven strength of Gov. Scott Walker as a candidate, as well as all other variables considered, the Wisconsin Governor race will now be rated “Likely Republican” on our 2014 Governor Map Predictions.

I, like others, believe that Walker was emboldened by his 2012 recall victory, and if reelected as I believe he is more “likely” than not to be, Walker would be a strong potential dark horse in the 2016 presidential nomination.

View Polling (UPDATED) Below Or Return To 2014 Governor Map