HomeNewsElectionsCan We Expect CNN Democratic Debate to Shake Up Race? 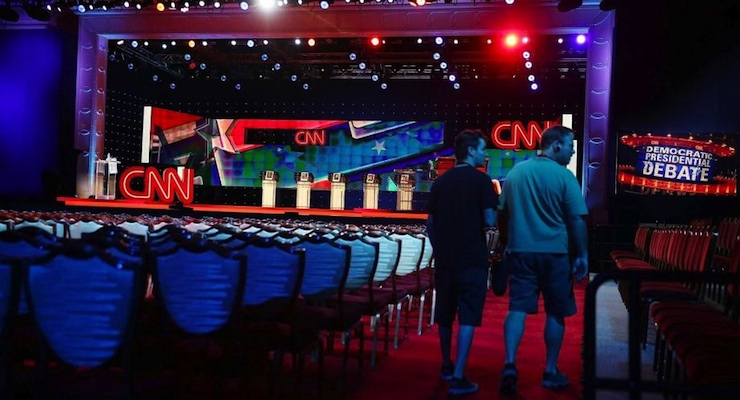 Hillary Clinton Will Stay the Frontrunner, Even if She Has a Bad Night in Vegas

The media is upping the stakes for frontrunner Hillary Clinton going into the CNN Democratic debate in Las Vegas, Nevada, but the hype is likely unfounded. To be sure, the pre-debate drama is arguably more than one might expect, considering there are half the candidates as the GOP field and even less media scrutiny, but the chances of a real shakeup are minimal.

While Republicans have already had two presidential debates, the gathering Tuesday in Las Vegas will mark the first of only six total for their learned friends across the aisle. Vermont socialist Sen. Bernie Sanders and former Maryland Gov. Martin O’Malley have been calling for, and have even accused the Democrat National Committee and DNC Chair Debbie Wasserman-Schultz of scheduling fewer debates to protect the frontrunner. To be sure, Democratic voters overall agree, but they also already predicting a victory for Hillary.

Hillary Clinton is still the overwhelming favorite of likely Democratic voters nationwide, with 75% who say she is the likely nominee including 40% who say it’s very likely. By comparison, only 10% think Joe Biden is very likely to be the nominee, and nine percent (9%) feel that way about Sanders. O’Malley will deliver liberal red meat, but is already triangulating his future position in a Clinton administration.

The remaining Democratic candidates, Lincoln Chafee and Jim Webb–both of whom are ex-Republicans–haven’t even registered a single point on the PPD average of national nomination polls. But there is really more to it than that, as the polls are just symptoms of the fundamentals at play in the Democratic primary, which we have outlined on the PPD Election Projection Model.

In our first expanded analysis of PPD’s Presidential Election Projection Model, we explained why–despite the email controversy and big crowds flocking to Sanders–the former secretary of state is still solidly favored (88%) to be the Democratic nominee in 2016. While Sanders has been cutting into her lead in the early voting state of Iowa and now leads Mrs. Clinton in New Hampshire, they are both white states.

The bottom line and hard truth is that after Iowa and New Hampshire, the electoral calendar is all downhill for the socialist’s campaign. The next two states are Nevada (Saturday, Feb. 20) and South Carolina (Saturday, Feb. 27), where the share of white voters will drastically decrease. Sanders has shown no ability to change the fundamentals that determine the victor in modern day Democratic primary contests, including an ability to broaden his appeal beyond white liberals.

Further, it is a simple fact that there is a strong correlation between establishment support for a candidate and the eventual winner of the Democratic nomination. That is to say, candidates who enjoy the most support from a party’s power-brokers, such as congressional endorsements etc., tend to earn the nomination. That is particularly true with the Democratic Party. Roughly one-sixth of the estimated 4,483 delegates up for grabs in 2016 will be “superdelegates,” or party leaders able to pledge delegates not bound by voting outcomes in their state.

They will have a say in who the party’s nominee will be, whether voters like it or not or if she has a bad night in Vegas. Unsurprisingly, the polls continue to bare out the fact that fundamentals matter.