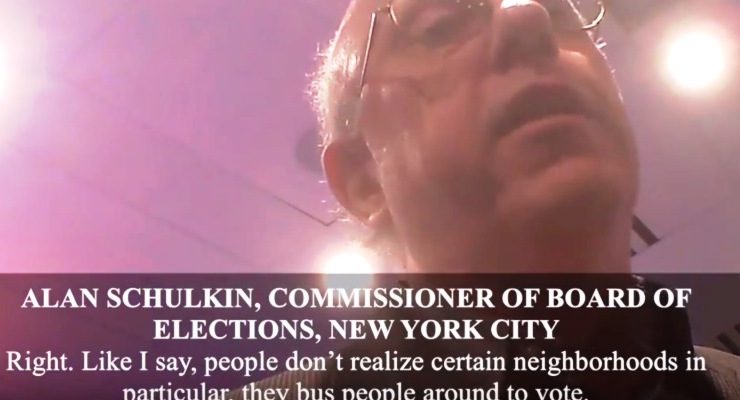 Republican presidential nominee Donald Trump has been warning his supporters at rallies to be on the lookout for voter fraud, something the Democrats have called ridiculous and an excuse for losing the election. But in truth, as People’s Pundit Daily has shown and will continue to expose in the days to come, voter fraud, or election fraud as it is defined, is very real and a very real problem in the United States.

New York City Board of Elections Commissioner Alan Schulkin was caught on tape explaining voter fraud, or at least one of the many ways Democrats commit mass election fraud.

The video, which was captured by Project Veritas, which is led by James O’Keefe, sparked outrage among New York City lawmakers. But, unbelievably, the outrage by Democratic officials is over him linking the voter fraud efforts to them and minority communities.

“His comments about alleged voter fraud coming from Black, Latino Asian and Muslim communities reeks of racism and is factually incorrect,” Bronx Assemblyman Luis Sepulveda said. “There is minimal evidence of voter fraud. Commissioner Schulkin’s comments were disgraceful and demonstrate that he is incompetent to serve as a Commissioner. Resign immediately!”

In fact, the evidence is overwhelming and it doesn’t come from suburbia or rural precincts. To his credit, Schulkin admits his hands are tied because of voter ID laws, which Democrats say are racist and nothing more than voter discrimination. This instance, as explained by the commissioner, is textbook tactics in what are known as “Spigot Cities,” and what People’s Pundit Daily reported in states like Ohio and Minnesota in 2012, where Democrats bused around Somali Muslim immigrants, many of which were illegally in the United States, to vote multiple times in multiple precincts.

Interestingly, in addition to Commissioner Schulkin saying people in minority neighborhoods are taken from “poll site to poll site,” he acknowledged that Muslims can hide their identify in burkas.

Democrats rely upon Spigot Cities to overcome Republican margins in suburban and rural precincts, which is why big counties such as Loudoun County in Virginia, hold their ballots back as others in the suburbs and rural precincts report the results. As PPD has witnessed and explained, they are calculating how much of a margin they need and fill in unclaimed absentee ballots or bus around certain voters from “poll site to poll site” last-minute.

But according to a spokesman for Mayor Bill de Blasio, it’s no longer racist to suggest voter fraud exists, it’s racist to expose it on video. The mayor’s office slammed Commissioner Schulkin, who was appointed in 2014 with the support of Council Speaker Melissa Mark Viverito, as well as Manhattan Council members Corey Johnson, Margaret Chin, Mark Levine and Ydanis Rodriguez.

“These allegations are not only false, they’re racist. Voter fraud fear-mongering is a right-wing smokescreen designed to not only disenfranchise the poor and people of color, but thwart efforts to deliver sorely needed electoral reforms in New York and across country. New Yorkers deserve public officials who are committed to defending democracy, not undermining it,” said spokesman Austin Finan.

Rubio Sticks by Trump: "I Do Not Want Hillary Clinton to Be Our Next President"