HomeNewsPoliticsTrump, Cruz Steal the Show in Sixth Republican Debate, Rubio and Christie Hold Their Own

Trump, Cruz Steal the Show in Sixth Republican Debate, Rubio and Christie Hold Their Own 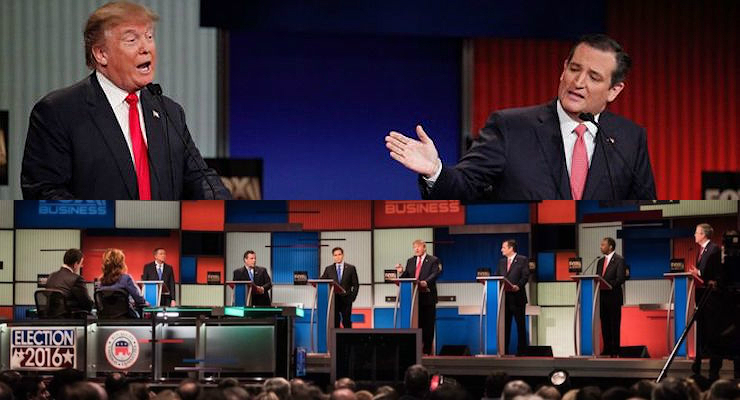 Donald Trump, top-left, and Texas Sen. Ted Cruz, top-right, clash over whether or not the latter is eligible to run for president. The entire GOP field takes the stage in North Charleston, S.C., for the sixth Republican primary debate hosted by FOX Business Network on January 14, 2016. (Photos: FNC/FBN)

The seven top-tier GOP presidential candidates took the stage on Thursday for the sixth Republican debate in North Charleston, South Carolina. As expected, there were fireworks that some candidates weathered better than others. Here is how the PPD Panel scored it:

Billionaire real estate mogul Donald Trump gave his best debate performance to date, which ultimately means he came out ahead despite the fireworks between him and Texas Sen. Ted Cruz. The freshman senator, who is Trump’s toughest Iowa contender, hasn’t been able to hit the frontrunner hard enough to knock him off the top spot nationally. Nothing changed Thursday.

Mr. Cruz, a favorite of tea partiers and religious conservatives in the Hawkeye State, clearly held his own in the quickly escalating feud with Trump. He noted Trump ignored the birther questions last year, and was only going after the issue because of the tightening of the polls.

“The Constitution hasn’t changed, but the poll numbers changed,” Cruz said. Pointing out Trump’s mother was born in Scotland, Cruz said: “On the issue of citizenship, I’m not going to use your mother’s birth against you.”

Trump said, “But I was born here … big difference.”

But Cruz may have made a big, even critical mistake by using poll-tested attacks on New Yorkers ahead of the Feb. 1 Iowa caucuses. The Donald was able to turn the tides on Cruz for questioning his “New York values.” In a powerful moment, Trump recalled memories from after 9/11 and described the “horrific” clean up and the “smell of death” in the city.

“It was with us for months, the smell,” Trump said. “And everybody in the world loved New York, loved New Yorkers — and I have to tell you, that was a very insulting statement.”

He went on to rebut Cruz’s assertion that “not many conservatives come from Manhattan. I’m just saying.”

Trump quickly fired back that William F. Buckley came out of the Big Apple. As of Thursday, Trump and Cruz are neck-and-neck in PPD’s aggregate Iowa caucus polls.

Marco Rubio focused earlier in the debate on bashing outgoing President Barack Obama and Hillary Clinton. But Rubio and New Jersey Gov. Chris Christie–who are competing with Cruz, Ohio Gov. John Kasich and former Florida Gov. Jeb Bush for the No. 2 position in New Hampshire–soon took shots at one point over Christie’s conservative credentials. Christie fired back by suggesting Rubio was guilty of playing the same card that Bush played against him in the last debate.

Christie, who is surging in the Granite State, posted another solid debate performance. The New Jersey governor is surging to the top tier in the final few weeks, just when it matters most. He also had one of the best lines of the night with his quick “you blew it, Marco” dismissal.

Worth noting, Trump still has a large lead in PPD’s aggregate polling in the first in the nation primary state.

Though Jeb(!) also saw his best debate performance yet against the billionaire, it’s still too little too late. Kasich, as well, continued to look cranky at times and dismissive of voters’ frustrations and concerns. While Carson pointed out that economic experts–including our own resident contributing economist Dan Mitchell, a senior fellow at the CATO Institute–scored his tax plan the highest, he had to do something to inject new energy into his campaign.

Why Did Our Sailors Bend Their Knees to Iran in the First Place?