HomeNewsGates Interview: ‘Absence Of Passion’ And ‘Conviction’ In Obama ‘Disturbed Me’

Gates Interview: ‘Absence Of Passion’ And ‘Conviction’ In Obama ‘Disturbed Me’ 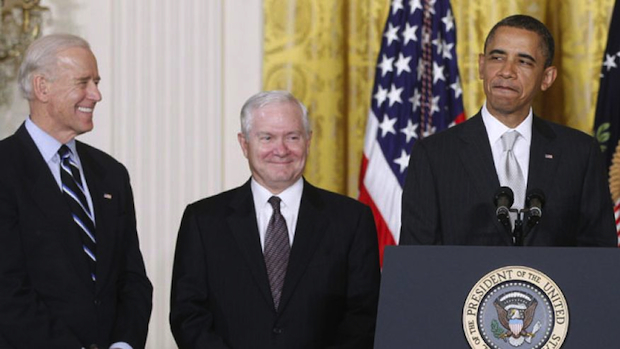 In an interview on Sunday, former Sec. of Defense Robert Gates doubled-down on his bombshell criticism of President Obama, saying the president’s “absence of passion” and “conviction” over his Afghanistan war strategy “disturbed” him.

The Gates interview was the first time the former Defense Secretary spoke publicly regarding claims made in his new bombshell book, “Duty: Memoirs of a Secretary at War.” In the Gates memoir, he exposes the disturbing fact the president did not believe in his own Afghanistan policy.

Speaking candidly, Gates compared and contrasted Obama’s leadership style with that of his former boss, who he served under for less time, former President George W. Bush.

“It’s one thing to tell the troops that you support them. It’s another to work at making them believe that you believe as president that their sacrifice is worth it, that the cause is just, that what they are doing is important for the country, and that they must succeed,” Gates told CBS News (video below).

“President Bush did that with the troops when I was secretary. I did not see President Obama do that. As I write in the book, it was this absence of passion, this absence of a conviction of the importance of success that disturbed me.”

When the details of the Gates memoir emerged, the White House immediately defended Vice President Biden and Hillary Clinton, who were also criticized in the book, but even mainstream media journalists were forced to concede the damage to Hillary Clinton and Joe Biden would be severe if either of them decided to run for president in 2016.

Both in his book and in the Gates interview on Sunday, the former Defense Secretary criticized the White House over interference in military affairs, stating “I actually think it’s gotten worse.”

John Bolton, former U.S. Ambassador to the United Nations under the Bush administration, and Charles Krauthammer both told Fox News that claims made in the Gates memoir are an “indictment of Barack Obama.”

Unsurprisingly, Gates has not received a free pass from criticism over the book, with many arguing it was untimely for a former Defense Secretary to be speaking out against the Obama administration he served before they leave the White House.

However, Gates defended his claims in the interview on Sunday, stating he didn’t think it made sense to wait until 2017, when the presidential election concluded, to underscore these issues.

The former Pentagon chief made it crystal clear that he does not regret anything he’s written, calling it an “honest” account.