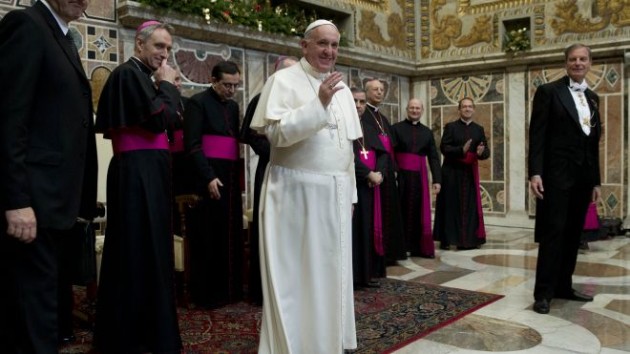 Jan. 13, 2014 – Pope Francis meets ambassadors to the Holy See, at the Vatican. Pope Francis criticized abortion as evidence of a “throwaway culture,” that wastes people as well as food, saying such a mentality is a threat to world peace. (AP)

VATICAN CITY –  For the first time since becoming head of the Catholic Church in Vatican City, Catholic advocates can now say Pope Francis criticizes abortion. On Monday, he criticized abortion as evidence of what he sees as a “the throwaway culture,” which wastes people and food alike. Both, Pope Francis says, is a threat to world peace.

“We cannot be indifferent to those suffering from hunger, especially children, when we think of how much food is wasted every day in many parts of the world immersed in what I have often termed `the throwaway culture,”‘ Francis said.

“For example, it is frightful even to think that there are children, victims of abortion, who will never see the light of day,” he said. Some have quietly criticized Pope Francis for being too light on criticisms of abortion, saying church teaching is well-known and understood by followers and non-followers.

In the past, he says that he doesn’t like to touch on moral teachings of the church, but he’d rather stay more about an approachable message.

Tossing out that more diplomatic approach, Francis called for us all to treat the elderly with more respect, deferring to their wisdom, and for children to be protected from exploitation, slavery and hunger.

Saying hunger is a threat to world peace, he noted that not only food but human beings themselves are often discarded as unnecessary.

Admonishing the persecution of Christians, he underscored how many have been forced to flee the Middle East for other places, adding “We must never cease to do good, even when it is difficult and demanding, and when we endure acts of intolerance if not genuine persecution,” he said.

The comments over persecution led into his call for more understanding toward migrants.

Italians are now faced with a current debate over whether or not to reform restrictive immigration policies, and Francis called for the Italian people to “renew their praiseworthy commitment of solidarity” toward migrants.

The statements made by Francis, particularly regarding abortion, represent a break from a general willingness to shy away from the issue. In the United States, the Supreme Court just refused to hear arguments over Arizona’s late-term abortion ban, which effectively upheld a previously decision by a federal judge striking down the law as unconstitutional.

Gates Interview: 'Absence Of Passion' And 'Conviction' In Obama 'Disturbed Me'