HomeNewsElectionsColorado Senate Race Analysis: No Rocky Mountain High Approval Of Udall, At All 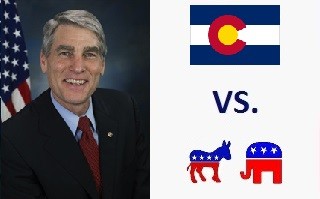 The Colorado Senate race is the twelfth article in a succession of articles offering expanded analysis and commentary on the ratings for the PeoplesPunditDaily.com 2014 Senate Map. The dynamic of this race has changed dramatically since the National Journal released a May article entitled, “Colorado’s Forgotten Senate Race.”

Democratic incumbent Governor John Hickenlooper was in big trouble early on, but Senator Mark Udall appeared early to be in a solid position to win reelection in 2014. Udall was elected with 53 percent of the vote in 2008, a Democratic wave election cycle, but not one Republican early on had been willing to jump into the contest.

That’s no longer the case, as the field quickly became crowded with many second-tier candidates. Let’s take a look at the Republican field of declared candidates.

State Senator Randy Baumgardner, is a Hot Sulphur Springs Republican who spent 4 years in the state House before being elected to the state Senate. He is an avid campaigner, who in 2012 beat Republican Jean White in a heated Republican primary that entertained the voters with a wide variety of drama, ranging from a registered sex offender to support for civil unions.

Fomer State House Leader Amy Stephens, spent 7 years in the state legislature and has ties to the Colorado Springs-based social conservative organization, Focus on the Family, and may very well be the grassroots best bet. Stephens ran an ad touting her record as House Leader, emphasizing her support for the middle class and seniors, while supporting the effort to balance the budget and promised “to fight ObamaCare until the day we are finally able to repeal it.”

She will no doubt be forced once again to defend her sponsorship of a 2011 measure that set up the state’s health insurance exchange, dubbed “AmyCare.” But she already held off a formidable primary challenge from former Rep. Marsha Looper, which was induced by state redistricting, and is ready with arguments to defend her action.

State Senator Owen Hill,  is a lawmaker from Colorado Springs who served just 1 term in the Colorado General Assembly. While he says he is ready to bring the next generation of Republicans to Washington D.C., a prospect many are attacking him on, his loose connection to politics may help him in an anti-establishment year when a recent Gallup measurement found the highest number of independents ever on record.

Small business owner Jaime McMillan is also declared, but outwardly supports mainstreaming the LGBT movement, which may not play to well in a Republican primary during a time when the state is fighting to protect their gay marriage ban.

Ken Buck is the Weld County District Attorney and Republican nominee for the U.S. Senate in 2010. In his 2010 bid, Buck’s campaign was derailed by a series of gaffes, including comparing homosexuality to alcoholism and making a comment that voters should elect him because he does not wear “high heels,” which was an ill-conceived reference to his former primary opponent, Jane Norton.

Buck may be a better candidate this time around, for sure, but his race underscores the importance of candidate recruitment, a variable considered in the model used at PeoplesPunditDaily.com. Buck is included in the 17 percent of races Republicans lost in states where the PVI (Partisan Voting Index) was more Republican than D+2.

Because Rep. Cory Gardner, who is widely seen as a Republican rising star, decided he was not going to make a run we assume that the political landscape in the Centennial State was just not that GOP-friendly. But that was before the rollout of ObamaCare, Udall’s support of the bill, and his shared broken promises with President Obama regarding Americans’ ability to keep their plans.

While Senator Mark Udall has an approval that’s averaged from a low of 40 percent (where he is now) to a high of 44 percent (where he was), voters say by an average 47.5 – 40 percent margin that the Democratic incumbent does not deserve to be reelected. Adding to the conclusion Senator Udall is soft on support, he earns well under the 50 percent threshold for an incumbent even when pitted against lesser-known Republican candidates.

It is too early to tell whether or not the news that Udall’s office intimidated the state’s insurance agency by pressuring them to change the ObamaCare-induced health plan cancellation numbers, will have a lasting effect. Still, it is clear that the issue of ObamaCare, in general, has hurt the incumbent.

Colorado voters oppose the 2010 Affordable Care Act 60 – 37 percent in the latest Quinnipiac University poll, and disapprove 59 – 37 percent of the job President Barack Obama is doing. Similarly, Gallup has measured Obama’s job approval at no more than 42 percent beginning in the fall of 2013.

The competitiveness of this race will depend upon who the Republicans nominate to run against Udall. Tea Party candidate Ken Buck, who failed to win a winnable race against Sen. Bennet, ironically has the best chance of beating him in surveys and is favored to win the nomination. Buck leads potential GOP candidates in primary polling, and perhaps we can call it voters’ remorse or name recognition, but Buck has made up a tremendous amount of ground.

Because polling conducted on the Colorado Senate race has been from Quinnipiac University and PPP, both of which use registered voter models and make presuppositions about the electorate far more favorable to Democratic candidates, Buck just may be leading in a likely voter model.

President Obama’s approval rating has cratered in the state, which is sure to be of concern to Sen. Udall. With Hispanics turning on President Obama, as well, this could be an interesting race under the right conditions. We see Sen. Udall as being very vulnerable — stemming from both ObamaCare and the potential scandal surrounding office emails — but until the Republican field plays itself out, the right call for this race is “Likely Democrat.”

View Polling Below Or Return To PPD 2014 Senate Map