HomeNewsElectionsPryor’s Strong, But Arkansas Senate Race Is No ‘Toss-Up’

Pryor’s Strong, But Arkansas Senate Race Is No ‘Toss-Up’

There can be little doubt that the 2014 Arkansas Senate race is proving to be far more competitive than the contest in 2010. The Republican path to retake control of the U.S. Senate in November, will almost certainly have to include the conservative state, with the defeat of incumbent Democratic Senator Mark Pryor coming at the hands of Rep. Tom Cotton. Since December, when we first analyzed the race, other pundit projections have swung back and forth, coming to rest now at a median predictions of a “Toss-Up.”

We disagree, falling in line alongside Five Thirty Eight and Rothenberg. But rather than offering up superficial, opinion-based analysis or simple knee-jerk reaction to volatile public polling as a justification for our rating, I instead would like to offer a detailed, transparent explanation for why the Arkansas Senate race is not a “Toss-Up.”

In 2010, when incumbent Democrat Blanche Lincoln was defeated by a 21-point margin by now-Senator John Boozman, the Partisan Voting Index was at R+9. As far as actual vote results, the state was 14 points more Republican than the country as a whole in 2010 and again in 2012. In 2014, the Partisan Voting Index is a mirrored R+14. While it is true that Lincoln made the top 10 for worst performances in Senate race history, Senator Mark Pryor is not Blanche Lincoln, so we would be correct to say a 2010 vs. 2014 comparison is somewhat the same as comparing apples and oranges. A better apples and apples comparison would be to focus on Pryor’s past performance.

In 2008, Pryor won every county when the state was also 14 points more Republican than the country as a whole, but he did so because he ran unopposed. Instead, let’s take a look at the 2002 Arkansas Senate race results by county, when Pryor defeated a severely damaged candidate, Tim Hutchinson, 53.90 to 46.10 percent.

There are several factors that are responsible for Pryor’s win. While we plug through these data points, it will become increasingly clear how much the “candidate strength” variable matters in election projection models, such as the one used at People’s Pundit Daily (or any credible model for that matter). However, by the time we get to the end of our data rundown, it will become apparent, as well, that Pryor has a serious two-fold problem he has never before had to contend with. Below is a map showing the 2002 election results. 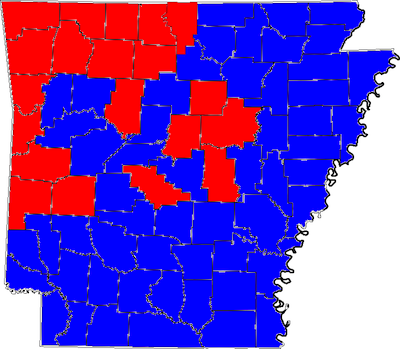 This was a particularly strong performance for Pryor considering 2002 was a fairly good Republican year. But if we look at the counties Pryor carried with 60 percent or more of the vote (dark blue) and 50 – 59 percent (light blue), then 1) the past performance is even more impressive, and 2) we will have a more in-depth understanding of Pryor’s current challenges. Forgive the rendition of the map, but you’ll get the point. 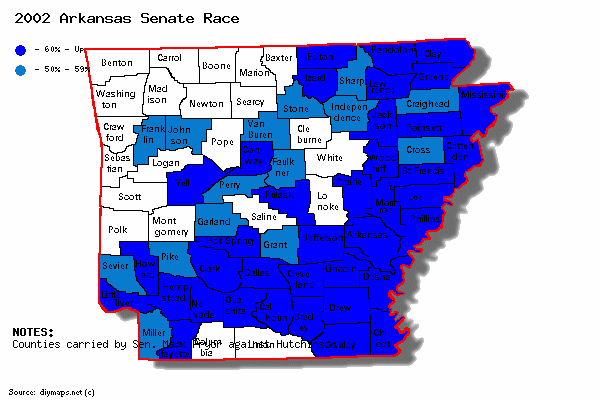 Pryor was able to hold down Hutchinson’s margins in the reliably Republican regions, including in the Northwest, save for Benton. He won Pulaski County handily, which is where Little Rock is located, but also did well in its suburbs. Obviously, he carried the Delta counties by overwhelming margins, largely because it is one of the few regions of the state with a substantial black voter presence.

But, even with all of that aside, Pryor’s relatively narrow win came from his performance in southern Arkansas. This is where Pryor’s father comes into consideration. He represented the area in Congress, and Pryor carried almost all of these counties.

It is fair to call southern Arkansas a borderline swing region of the state. Prior Democrats who went down in defeat were very close to mirroring Pryor’s performance in the Delta and in Pulaski County. However, because they were not as strong in the southern region of the state, they lost. In 2000, Al Gore split these counties with George Bush, and lost the state by five points. In 2004, John Kerry lost nearly all of them. Demonstrating Pryor’s strength, Kerry and Gore didn’t come anywhere near the 70 percent level of support that Pryor enjoyed, even in the Democrat-friendly counties they won.

Still, the trend is clear and on par with the trends we observe in Partisan Voting Index and party identification. They all point to an ideological shift, which has moved on generation lines and strongly favors Republican candidates. Which brings us to Mr. Pryor’s two-fold problem, which unfortunately for him, directly affects his two strongest assets.

On the influence of his father’s legacy, it is grossly overstated. If you voted for Pryor’s father when he ran for Congress, governor and senator, then in 2014 you will be 89. While the Pryor name has been mentioned over and over as a significant factor in other pundit’s analysis, the reality is that very few of these voters will still be alive, and an even fewer number of them will be voting. He will not be able to rely upon name-related voter loyalty to the extent he has in the past.

Second, while Democrats perform well in the Delta, Little Rock and southern Arkansas, all of these counties combined cannot deliver a Democratic victory without duplicating or coming close to duplicating Pryor’s performance in the “southern swing” region in 2002. Why is this unlikely? Well, a large part of the region falls within Arkansas’s 4th Congressional District, which you may have guessed, is represented by a certain Rep. Tom Cotton, his Republican opponent. Take a look at the map below, and zoom in a few clicks if necessary.

We’ve spent all of this time talking about Pryor, but Cotton — though not without weakness — is likely to be a stronger-than-average candidate. His voting record is not one of an extremist, and he is no Todd Akin with diarrhea of the mouth. Cotton has an Ivy League Harvard education, which will appeal to suburban voters whom Pryor needs to hold on to in and around Little Rock, as well as other suburbanites from farther down south. His military background, which Pryor made the mistake of belittling, will appeal to rural voters that Hutchinson performed relatively poorly among in 2002.

President Obama, according to Gallup, has struggled to have an approval rating in the state above 35 percent. It has averaged around 33.5 percent in 2014, increasing only modestly to 34.5 even as his national approval rating seems to be recovering slightly. Arkansas is simply not the same state that it was when his father was elected, or even when Senator Mark Pryor was first elected for that matter. Pryor is a strong candidate, to be sure. But the trend in state’s political leanings are more likely than not to overcome him.

So, how do we explain the polling?

The average polling below shows Pryor ahead by 4.8 percent. However, The NYT/Kaiser poll’s sample is deeply flawed, with Pryor leading by 10 points among voters who voted for Mitt Romney by just 1 point, when nearly 61 percent of Arkansans voted for Mitt Romney in 2012. We see similar flaws — though not as prevalent — with the NBC/Marist poll. On our measurement of pollster accuracy, Marist scored a 4.2 out of 5 in 2012, with 5 being the least accurate. The last glimpse of internal polling from the Pryor camp showed him with just a 1-point lead in the low 40s. It would be safe to assume the majority of the large amount of undecideds disapprove of the president and his agenda.

My hunch is that the polling will catch up to reality by late summer.

When we run the numbers into the model, we find that there is a 63 percent chance that Rep. Tom Cotton will defeat incumbent Senator Mark Pryor. With these probabilities, the Arkansas Senate race is rated “Leans Republican” on PPD’s 2014 Senate Map Predictions.