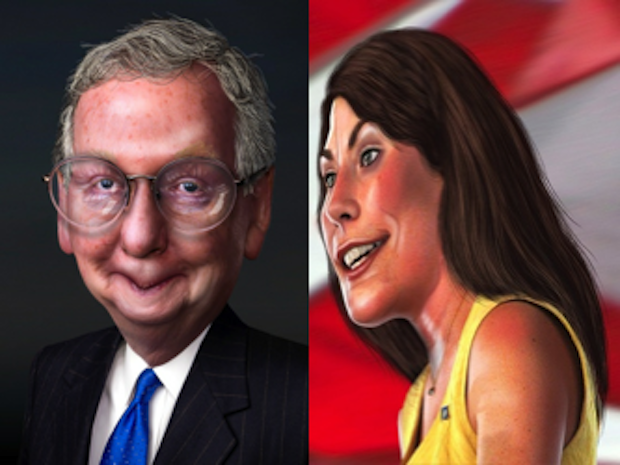 Minority Leader Mitch McConnell is beginning to pull away from Democratic challenger Alison Lundergan Grimes in the 2014 Kentucky Senate race, according to recent polling. Since we first visited and rated the race it has always been rated “Likely Republican” on the PPD 2014 Senate Map, though characterized as one of two races Democrats see as an opportunity to win in conservative territory in November. Now, we are beginning to see the fundamentals we mentioned fall into place.

Following McConnell’s overwhelming victory over challenger Matt Bevin in the Republican Senate primary on May 20, two independent expenditure groups that support Senator McConnell have bought a total of $5.2 million in ad time to hammer Grimes and tie her to a deeply unpopular president and his signature health care law. Obviously, and predictably, it is beginning to have an affect.

When looking at the race’s polling over the past month, a trend immediately pops out showing McConnell opening up a lead. A poll conducted by SurveyUSA for the Courier-Journal found Grimes leading by just 1 point with 43 percent. Aside from the fact that 43 percent is close to the ceiling of support for Democratic candidates in state, the polling firm has certain polling methods, which places strict limitations on their ability to draw from a reliable sample. It’s not that SurveyUSA isn’t an honest pollster, but our pollster rating model finds serious flaws with their methodologies, and it shows in our accuracy test, which factors in how many times a pollster missed the mark by 3-points or more (among other variables).

A poll conducted by Republican polling firm Wenzel Strategies during the week following the primary found McConnell leading Grimes by 3 points, 47 to 44 percent. Again, we see Grimes around the low 40s in support, and she has never polled higher than 46 percent. Now, the latest survey from Rasmussen Reports founds McConnell pulling away with a 7-point lead — 48 to 41 percent — with Grimes falling back down in the low 40s where she has averaged in all polls conducted since 2013.

On primary day we cautioned over-confident Democrats that Grimes would not be effective at combating the truth, which is that she would be fully supportive of the Obama and liberal, big government agenda. The We Are Kentucky PAC, the main PAC supporting Grimes, recently reported raising just $32,500 in the first quarter of 2014. Since its inception last July, it has raised only $293,000. We Are Kentucky has yet to even run or reserve media advertising on behalf of Grimes. However, it has already burned through most of the money it has raised.

As of April 1, the PAC reports having just $108,336 cash on hand. Meanwhile, just one super PAC supporting McConnell — Kentuckians for Strong Leadership — has reported raising more than $3.3 million already. Worth noting, none of this money takes into account McConnell’s own massive — massive — campaign war chest. Since 2009, he has raised $21,686,624, with $10,145,566 cash on hand. So,  it is safe to conclude that much of McConnell’s lead has to do with the barrage of attack ads and McConnell’s money advantage.

But not all of it.

While we call Kentucky the Blue Grass State, the grass is just about the only thing blue about the state. President Obama’s approval in Kentucky is in the low 30s, and the Democratic brand is so unpopular that McConnell can survive his low approval numbers in November. In 2010, when Sen. Rand Paul easily won his seat riding a wave of Tea Party support, the Partisan Voting Index (PVI) for Kentucky was R+10. In 2014, the Partisan Voting Index is estimated at R+14, far too Republican to consider the 46 percent Grimes earned in just one poll anything but her ceiling of support.

Even the horribly flawed New York Times/Kaiser poll found McConnell ahead by 1-point back in April, but the sample was only +3 Romney. Mitt Romney carried the state of Kentucky by 23 points against Barack Obama in 2012, a year when the PVI fell between 2010 and 2014. Even though I have been hard on Rasmussen Reports in the past, they have likely hit the nail on the regarding where this race stands right now. McConnell, suffering from a lack of approval on his right flank, is hovering just below the 50 percent threshold, while Grimes is struggling to break 45 percent.

Grimes has a proven ability to win in a statewide race, but not against Mitch McConnell, and a U.S. Senate race is a much different atmosphere than a contest for secretary of state. Further, if there is one thing conservative Republicans who are unhappy with McConnell’s leadership wants to see more than Establishment candidates defeated, it’s a U.S. Senate soon-to-be controlled by the Republican Party after November. When we examine the Kentucky Senate race using the PPD model, which you can read about on the 2014 Senate Map Predictions page, Mitch McConnell has a 75 percent chance of defeating Alison Lundergan Grimes.

Pryor's Strong, But Arkansas Senate Race Is No 'Toss-Up'