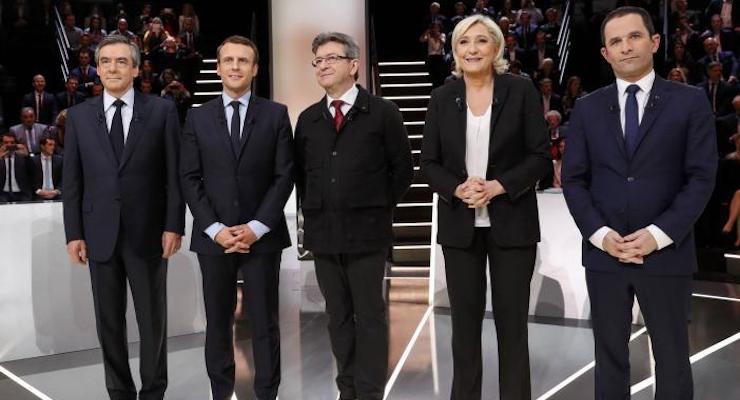 Marine Le Pen and Emmanuel Macron are projected to advance to a May 7 runoff after the first round of voting in the French presidential election Sunday. With 50% of the vote counted, Le Pen led with 24% and Macron 22%.

The projections are based on vote totals in certain constituencies that were extrapolated nationwide. But just more than an hour after polls closed, Le Pen declared victory, telling a crowd of her supporters that she is “the great alternative” in the president race.

“It is time to liberate the French nation from arrogant elites who want to dictate how it must behave,” Le Pen said.

Before the results were even announced, Le Pen’s supporters were so certain of her victory that they began singing “La Marseillaise” at one of her headquarters. Le Pen’s victory is another victory for a populist movement that soured to victory’s in Britain’s so-called “Brexit” EU referendum and the election of President Donald J. Trump in the United States.

The May 7 runoff now places the controversial nationalist against the centrist, Pro-European Union Macron. But the non-Le Pen forces are quickly coalescing around the only chance to stop the nationalist.

Conservative candidate Francois Fillon immediately endorsed Macron, as did Prime Minister Bernard Cazeneuve. Far-left presidential candidate Jean-Luc Melenchon refused to concede defeat until the final results of the vote were announced, and also said he wouldn’t endorse a second-round candidate. Le Pen is frequently referred to as “far right,” but aside from the EU and immigration she is quite liberal on most other issues.

In a speech in Paris, Macron said he wanted to gather “the largest possible” support before the runoff and he praised his supporters for a campaign that “changed the course of our country.”

It was the first time that a modern presidential election in France took place under a state of emergency, which the nation has lived under since th eParis attacks in November 2015. Security was beefed up around the 60,000 polling stations after another terror attack right on the Champs-Elysses on Thursday, which left one police officer and the gunman dead.

France’s Interior Ministry said voter turnout by late afternoon was 69.4%, slightly lower than in 2012. There was a surge in turnout in the Paris region, but it couldn’t stop Le Pen in this round. France’s abysmal 10% unemployment and national security issues were the top concerns for the 47 million eligible voters.

House Oversight Chairman Jason Chaffetz Will Not Seek Reelection in 2018