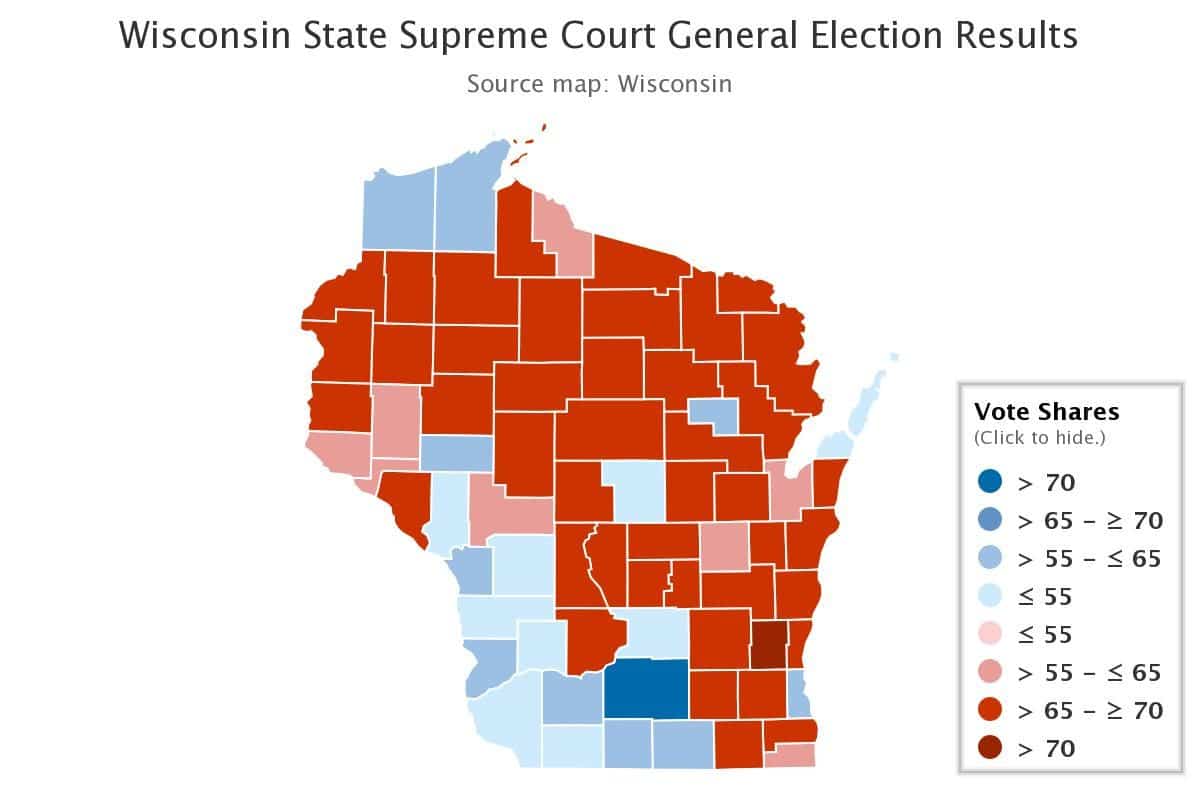 Hagedorn Squeezed Blood from a Stone in Red Counties, Swing Counties Pivoted Back

While the results of the Wisconsin Supreme Court election are unofficial, Judge Brian Hagedorn leads Judge Lisa Neubauer 50.2% to 49.8% with 100% reporting. It was an unexpected nail-biter that remained too close to call in the early hours Wednesday morning.

In the Badger State, seven justices are selected in nonpartisan elections for 10-year terms on the state’s high court. But in reality, each ideology is well-known and judicial elections become party causes.

Liberal Judge Neubauer was expected to win. Private polling on the Republican side showed Judge Hagedorn trailing in the mid-to-high single digits, while Democratic internal polling showed him trailing by double-digits.

At this point, Judge Neubauer has the option to petition for a recount at her own expense. But barring significant developments or tabulation errors, Judge Hagedorn is the apparent victor.

(Note: Ashland County was reversed on the map and has been updated.)

We will not call this race until the results are certified. But if and when they are and the nearly 6,000-vote margin holds, it’ll give conservatives a majority on the state’s highest court until 2023.

So, how did conservatives defy the polls and the odds in Wisconsin? The answer should concern Democrats as we head into the 2020 presidential election cycle.

Meanwhile, Judge Neubauer improved over Hillary Clinton’s support in Western Wisconsin, but the Milwaukee suburbs that swung against the GOP in 2018, swung back.

President Donald Trump did better in Western Wisconsin, unsurprising given his conservative populist message. But my argument all along has been that those suburban voters who swept out the Republican House in 2018, are not “Democrats.”

They are “swing” or “pivot” voters, and they pivoted back. That is what they do, hence the name.

The day after the April 5 election, Kloppenburg, was leading and declared victory. But a clerical error in Waukesha County resulted in thousands of ballots being left out of the county’s initial count.

Following the correction, Prosser gained a lead over Kloppenburg. On April 15, 2011, the Government Accountability Board certified Prosser as the winner of the election with a vote margin of 7,136 votes.

On April 20, Kloppenburg filed a request for a recount because Prosser’s 0.488% margin of victory was below the 0.5% threshold required for recounts at the time. On May 23, the Government Accountability Board completed the recount and certified Prosser as the winner.

The final count found Prosser leading Kloppenburg by 7,004 votes, a 0.46% margin of victory.

That said, the Wisconsin Election Commission has weighed in, admitting there were very few problems. Given the lack of error, the margin is unlikely to be overturned.

The closeness of the race does not explain why we haven’t yet called the election. We are waiting on the unofficial results to be certified. Judge Hagedorn has declared victory and our lack of call shouldn’t be construed to mean that decision was particularly premature.