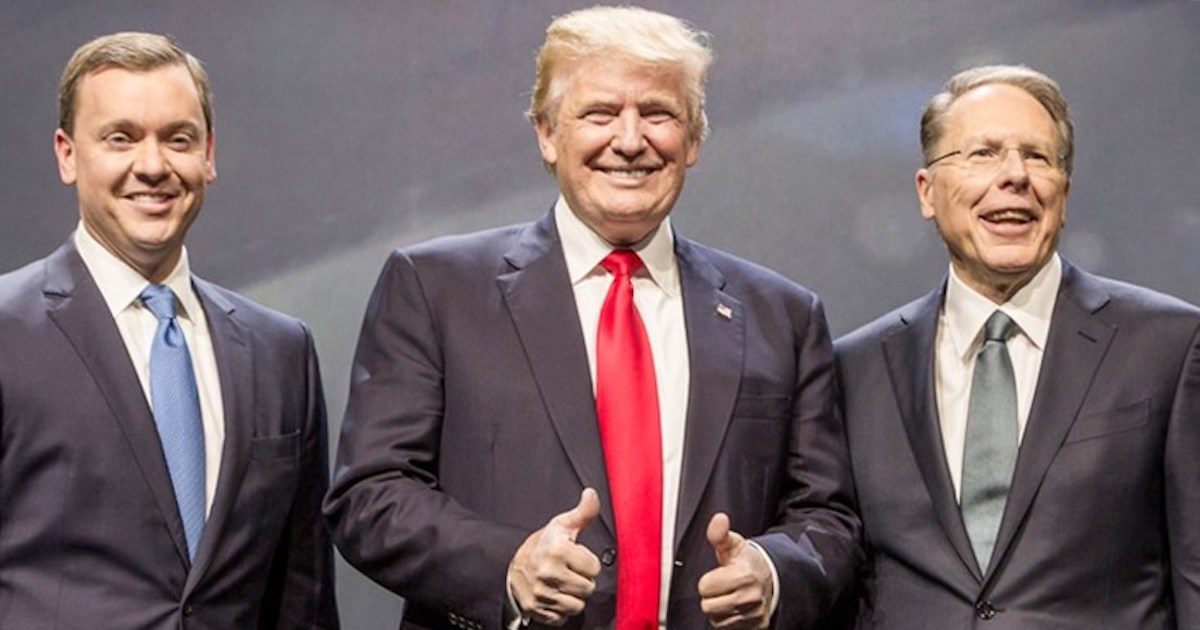 In the wake of the mass shootings in El Paso, Texas, and Dayton, Ohio, President Donald J. Trump is pushing for stricter gun control measures to include “red flag” laws and federal background checks.

Second Amendment supporters are calling the move his “read my lips” moment, a reference to George H.W. Bush breaking his promise and betraying his base over taxes.

In April 2017, President Trump delivered a rousing speech at the National Rifle Association (NRA) annual convention, making him the first president to return since 1983.

“You came through for me, and I am going to come through for you,” the president told supporters. “The 8 year assault on your Second Amendment freedoms has come to a crashing end.”

“You have a true friend and champion in the White House.”

He became the first sitting Republican President of the United States to return to thank the gun rights group since Ronald Reagan in 1983.

H.W. Bush skipped the conference and was defeated by Bill Clinton in 1992. He wrote a letter terminating his NRA membership in 1995 and blamed the loss on Ross Perot, who won 17% and 18% of self-identified Republican and conservative voters, respectively.

“Let me make a simple promise to the freedom loving people,” he said. “As your president I will never, ever infringe on the right of the people to keep and bear arms. Freedom is not a gift from the government. Freedom is a gift from God.”

The NRA, the National Association for Gun Rights and others have all come out against the president’s proposal. At least one has already publicly stated the group will not support the president’s re-election if he moves forward with the current proposals, which they all view as ineffective.

For now, we’ll leave the question of effectiveness for another day, one that will come sooner rather than later. We ran a machine learning voter file analysis to gauge the potential impact Second Amendment supporters have on the electorate in 11 key battleground states.

For the purpose of the model, Second Amendment supporters are defined as follows:

Individuals who have donated to a known pro-Second Amendment organization, or who have an interest in hunting, fishing, or shooting, as well as military history interest.

That’s approximately 23.1% of the total electorate in the aforementioned battleground states. The table below depicts each state, the count pertaining to Second Amendment supporters, the total sample size and the totals for each.

Worth noting, the model’s “inferred” identification is very accurate. Verifiable and inferred Republicans make up nearly 53%.

By gender, the pro-Second Amendment electorate is almost an identical reverse mirror image of the battleground electorate, 52% male and 48% female.

Put bluntly, the voter profile for Second Amendment supporters are Republican target voters, and there are a lot of them. Those who aren't identified as Republican or inferred Republican are, demographically, prime voters the GOP should be targeting for crossover votes.

Instead, they're talking about depressing a significant percentage of the battleground electorate that is chock full of core target voters. Winning a national election is about putting together a series of voting blocs to form a majority or the largest voting plurality.

Contrary to popular belief, voting coalitions do not exist or evolve in a vacuum. Supporting a certain public policy position that increases support among one voting bloc can and more often will impact the level of support among another.

Building a winning coalition is a constant give and take equation. A successful national campaign is simply one that maximizes support in the vacuum.

The above analysis of battleground voters illustrates how "pandering" and/or "appeasement" almost never results in a net increase in support, let alone maximizes it.

There is an argument that support for stricter gun control measures has risen since the last shootings, and that President Trump and Republicans have an opportunity to appeal to college educated voters.

Given the modeling, this argument is problematic for several reasons. First and foremost, there are simply too many pro-Second Amendment voters to offset. This is a must-have bloc for a Republican presidential candidate.

Secondly, President Trump is not underperforming with college educated voters because he didn't support stricter gun control measures. It isn't their top issue. It's not even close.

Gun control is a temporary, marginal issue for these and most voters. Persuadable voters who support so-called "common sense" gun control do not vote on gun control.

Which hypothetical is more likely given the above data?

By supporting stricter gun control, President Trump will win over college educated voters who don't view it as a primary voting issue…

Voters who do vote on gun control, vote to oppose it.

Those are the voters identified above who represent 23.1% of the total battleground electorate. Betraying promises made to any voting bloc risks depressing turnout, reducing margins and could very well end up costing Donald Trump re-election.

A common error made by political pundits is to assume others see the world as you do, and applying how you see the world to others. Also worth remembering, elections are won on the margins.

Let's take one state as an example -- Michigan.

In 2016, Donald Trump became the first Republican presidential candidate to carry the state since 1988. The statewide electorate cast 4,548,382 votes and his margin of victory was less than 10,000 votes.

The Democratic candidate doesn't need all of them to turn on Donald Trump. They just need a marginal percentage.

Depress them, and he will lose the state of Michigan. It's the same daunting story in Wisconsin, in which we currently view the president as the favorite.