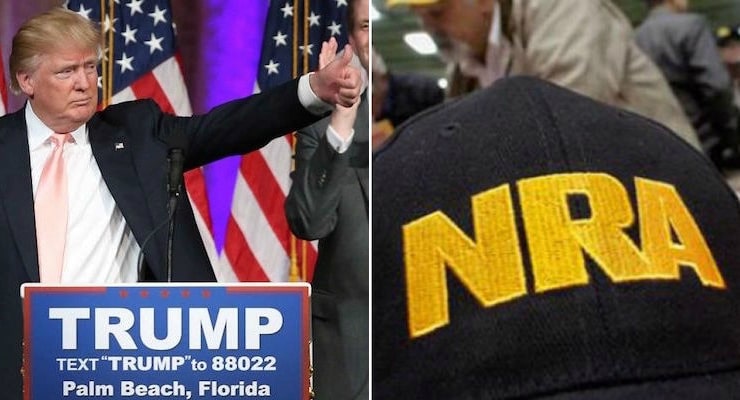 Donald Trump, left, gives a thumbs up to the crowd in history victory speech in Palm Beach, Florida, on March 15, 2016.

The NRA, or National Rifle Association, endorsed presumptive Republican Donald Trump for president on Friday at an event in Louisville, Kentucky. The announcement marks the earliest time the gun rights group has ever endorsed in a presidential election.

Chris Cox, the executive director of the NRA, introduced Mr. Trump to a roughly 10,000-strong crowd. NRA officials said they haven’t seen this level of excitement for a presidential candidate since George W. Bush ran for president in 2000 and 2004.

“If Hillary Clinton is elected in November and serves two terms, she’ll be president until 2025. The damage that would be done by her policies and her Supreme Court picks would destroy freedom and thereby destroy the America we all love,” Mr. Cox said. “We cannot let that happen. We have to unite and we have to unite right now. So on behalf of the thousands of patriots in this room and the 5 million NRA members across this country and the tens of millions who support us, I’m officially announcing the NRA’s endorsement of Donald Trump for president.”

Mr. Trump recently released a list of potential Supreme Court nominees, which received rave reviews from the base and Republican leadership.

While Mr. Trump decades ago had expressed support for gun restrictions, he has done a complete 180 on the issue. He frequently responds to terror attacks, such as the one in San Bernardino and Paris, by arguing the armed resistance of citizens in the face of terror could’ve saved lives. He repeated that line of attack in his acceptance.

Mr. Trump also railed against gun free zones, which he noted are frequent targets of terrorists and criminals. He vowed to get rid of gun free zones, something that caused the crowd to erupt into applause.

The announcement comes a day before Mrs. Clinton, Mr. Trump’s likely Democratic rival, travels to Florida to meet with the mother of Travon Martin, a black teenager who was shot in killed in self-defense by neighborhood watch leader George Zimmerman. He become a martyr-like figure to the left, who along with the media attempted to portray him as an innocent young boy shot and killed by gun laws that favor white people.

“Hillary Clinton is most the anti-gun, anti-Second Amendment candidate ever to run for president,” Mr. Trump said.

In reality, the jury found the evidence to portray a very different picture, one in which Mr. Zimmerman was the victim and justifiably used his right to stand his ground against a violent aggressor–Mr. Martin. Nevertheless, Mrs. Clinton had previously sold herself in 2008 as a pro-NRA Democratic candidate against Barack Obama.

“The Second Amendment to our Constitution is clear. The right of the people to keep and bear Arms shall not be infringed upon. Period,” Mr. Trump said. “The Second Amendment guarantees a fundamental right that belongs to all law-abiding Americans. The Constitution doesn’t create that right – it ensures that the government can’t take it away. Our Founding Fathers knew, and our Supreme Court has upheld, that the Second Amendment’s purpose is to guarantee our right to defend ourselves and our families. This is about self-defense, plain and simple.”