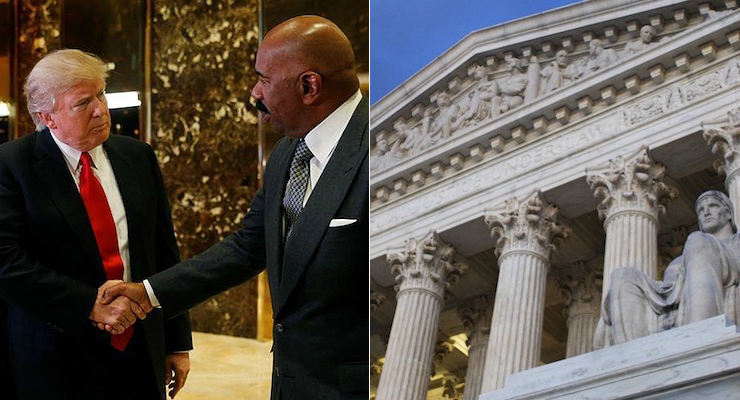 The then-Republican nominee for president promised to nominate a constitutionalist in the mold of the “late great” Justice Scalia and, judging by the list, it will please conservatives to know it appears he intends to do just that. Most of the names on President-elect Trump’s shortlist have already been through a confirmation process, making opposition to them despite their conservative views difficult for Democrats to navigate politically.

Here’s a look at all of the seven appeals court judges on the list.

Michigan Supreme Court Justice Joan Larsen became an assistant attorney general in the Justice Department’s Office of Legal Counsel in 2002. Larsen, 48, received her law degree from Northwestern University and clerked for the “late great” Justice Antonin Scalia before being named to the state’s high court by Republican Gov. Rick Snyder.

Judge William H. Pryor Jr., was appointed to the U.S. Court of Appeals for the 11th Circuit in Alabama by President George W. Bush and has served since 2004. For saying “nine octogenarian lawyers who happen to sit on the Supreme Court” shouldn’t decide on the death penalty, his nomination turned into a fight. Pryor, 54, was only confirmed in a 53-45 vote due to the “Gang of 14” bipartisan Senate compromise in May 2005. It ended a Democratic filibuster of several Bush judicial nominations and put an end to debate over whether Republicans should invoke the  “nuclear option,” which Democrats ended up doing under Harry Reid. He became Alabama’s attorney general in 1997 after his predecessor, Jeff Sessions, was elected to the U.S. Senate. Pryor, who received his law degree from Tulane University, was elected state attorney general in 1998 and was re-elected in 2002. In 2013, he was confirmed to a term on the United States Sentencing Commission..

Judge Thomas Hardiman was appointed by Bush in 2007 to the U.S. Court of Appeals for the 3rd Circuit in Pennsylvania confirmed by a 95-0 vote in March 2007. Hardiman, 51, a graduate of Notre Dame, previously served as a federal district judge for the Western District of Pennsylvania. He was overwhelmingly confirmed by voice vote in October 2003 and also practiced law in Washington and Pittsburgh.

Judge Steven Colloton currently serves on the U.S. Court of Appeals for the 8th Circuit in Iowa. Colloton, 53, was appointed in 2003 by President Bush and overwhelmingly confirmed by the U.S. Senate in September 2003 by a vote of 94-1. He also served as a U.S. attorney for the Southern District of Iowa after graduating from Yale Law School and clerking for the late Supreme Court Chief Justice William Rehnquist.

Judge Neil Gorsuch, who serves on the U.S. Court of Appeals for the 10th Circuit in Colorado, was also appointed in 2006 by Bush. Gorsuch, 49, was confirmed by a voice vote in July. He was previously a deputy assistant attorney general at the Justice Department. The Harvard Law School graduate clerked for both current Supreme Court Justice Anthony Kennedy and former Justice Byron White.

Judge Diane Sykes of the U.S. Court of Appeals for the 7th Circuit in Wisconsin was also named by Bush. Sykes, who received her law degree from Marquette University, was confirmed by the U.S. Senate by a vote of 70-27 in March 2004. Sykes, 58, began serving as a justice on the Wisconsin Supreme Court in 1999 and after she was a trial court judge in both civil and criminal cases. She received her law degree from Marquette University.

Judge Raymond Gruender was appointed to the U.S. Court of Appeals for the 8th Circuit in Missouri by former President George W. Bush. Gruender, 53, previously served as a prosecutor and as the U.S. attorney for the Eastern District of Missouri. He received his law degree from Washington University in St. Louis. The Senate voted 97-1 to confirm him in May 2004.

With notable exceptions such as Justice Elena Kagan and retired Justice Sandra Day O’Connor, the vast majority of justices nominated in modern politics have been federal appeals court judges.