HomeNewsPoliticsTrump to Sign Executive Orders on Plan to Renegotiate NAFTA, Withdraw From TPP

Trump to Sign Executive Orders on Plan to Renegotiate NAFTA, Withdraw From TPP 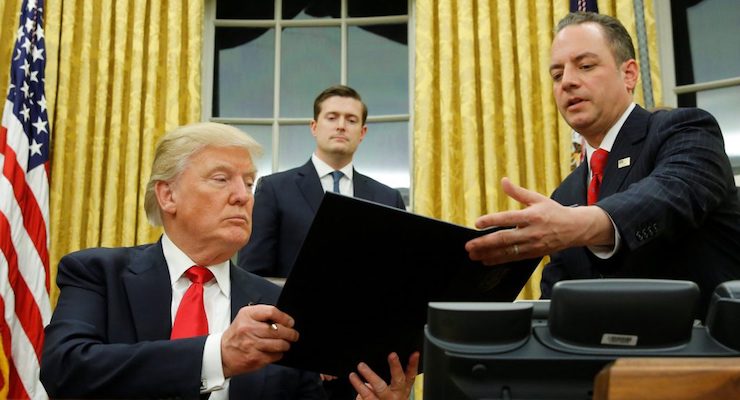 President Donald J. Trump will sign executive orders stating his intention to renegotiate NAFTA and withdraw from the Trans-Pacific Partnership (TPP). The actions would represent a fulfillment of oft-repeated campaign promises, which won him Rust Belt states no Republican has carried since the 1980s.

NAFTA, the North American Free Trade Agreement, was pushed by former President Bill Clinton and enacted in 1994. It is a free trade agreement between the U.S., Canada and Mexico, and has largely been blamed for the destruction of much of the American manufacturing base.

The deal was intended to eliminate most trade tariffs between the three nations, increase investment and tighten protection and enforcement of intellectual property. There are numerous reports claiming the number of jobs increased since it was enacted, but much of that analysis uses dating gimmicks to pad the data.

According to the Bureau of Labor Statistics, a division within the U.S. Labor Department, the state of Indiana alone lost roughly 18% of the manufacturing industry during the period 1994 to 2015, years impacted by NAFTA and the World Trade Organization. The cutoff for the figure is the second quarter of 2015, when the latest available employment data was released by the Labor Department.

“We will be starting negotiations having to do with NAFTA,” Presidnet Trump said Sunday at a swearing-in ceremony for his top White House advisers. “We are going to start renegotiating on NAFTA, on immigration and on security at the border.”

From the third quarter of 1993 to the aforementioned period, The Hoosier State has lost at least 113,000 manufacturing jobs, a conservative number that factors both jobs created by exports and jobs displaced by imports. Meanwhile, the percentage of all private sector jobs that are manufacturing jobs in the state of Indiana fell from 28% to 20.2% during the NAFTA-WTO period.

TPP, the trade agreement negotiated by the Obama administration including 11 Pacific Rim countries, has yet to be ratified by Congress. Now, the new administration will also move to begin individual trade negotiations with the countries involved in TPP.

Wilbur Ross, who was nominated for secretary of the Commerce Department, U.S. Trade Representative Robert Lighthizer and Peter Navarro, the head of the newly-formed White House Trade Council, will be put in charge of negotiating the new deals.

In the lead up to the announcement, the president held a round table with business leaders at the White House focused on incentivizing companies to stay in the U.S. and build their products in the U.S.

“We think we can cut regulations by 75%, maybe more,” President Trump said. “We want to make our products here. There will be benefits for companies who make their products here. It’s going to be a wave.”

Following the business round table, he will meet with labor union leadership and said he will soon meet Canadian Prime Minister Justin Trudeau and Mexican President Enrique Peña Nieto to begin work on overhauling NAFTA.