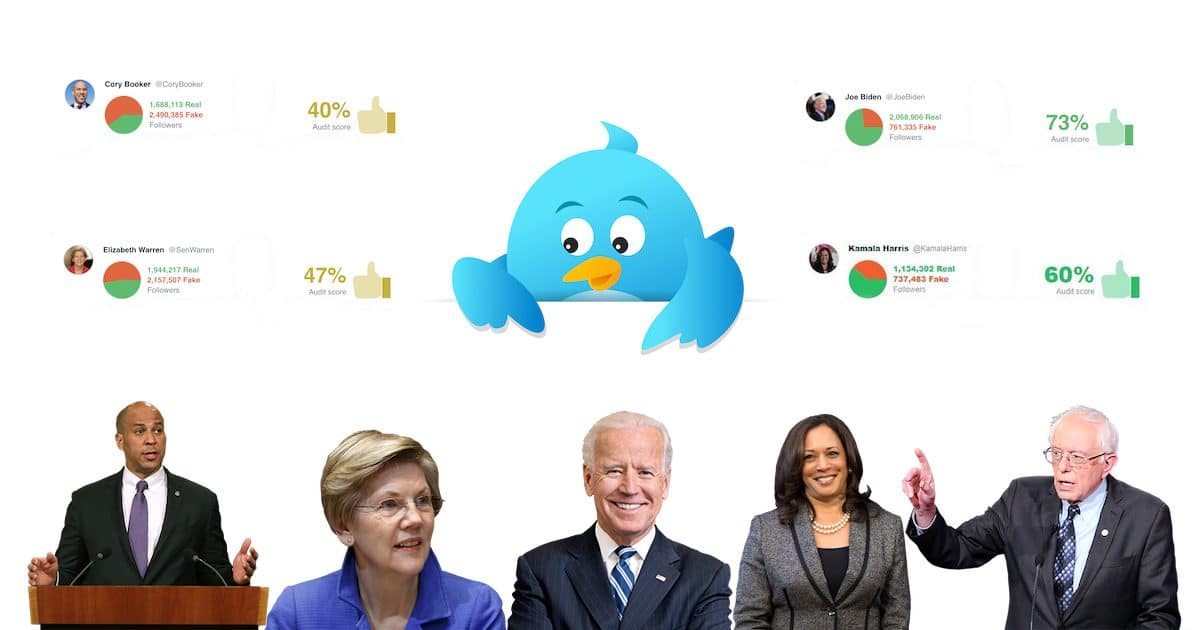 With the exception of Donald Trump and Bernie Sanders, audits conducted on the official Twitter accounts belonging to the top 2020 presidential candidates revealed scores of fake followers.

Moreover, a comparison of audits conducted prior and subsequent to one candidate’s announcement indicated deception.

How Audits Were Conducted

Each audit was conducted using the well-known online tool Twitter Audit, which draws a sample of up to 5000 or more, unless you subscribe to the Pro Twitter Audit service, which we do.

Followers for a user are scored based on the number of tweets, the date of the last tweet, and the ratio of followers to friends. Those scores determine whether any given user is real or fake.

“Of course, this scoring method is not perfect,” Twitter Audit states openly on the site, “but it is a good way to tell if someone with lots of followers is likely to have increased their follower count by inorganic, fraudulent, or dishonest means.”

While the number of fake followers is significant, it is somewhat expected for a former presidential candidate and target of the status quo.

Similarly, President Donald Trump has roughly the same percentage of fake followers as Senator Sanders, though it is pretty clear both are high risk accounts given their controversial positions.

More than Half of Cory Booker’s Followers Are Fake

While there is no updated audit score available for Senator Cory Booker, D-N.J., we do have audit results dated to the height of the confirmation hearings for U.S. Supreme Court Associate Justice Brett Kavanaugh.

More than half, or nearly 2.5 million, of the user accounts following Senator Booker, are fake. Less than 1.7 million were deemed real.

Senator Booker currently has 4.18 million followers on Twitter, roughly the same as when the audit was conducted.

We found similar results for the account belonging to Senator Elizabeth Warren, D-Mass., though her new 2020 presidential campaign account does not yet have the track record to audit.

More than Half of Elizabeth Warren’s Followers Are Fake

Reflecting the same period as Senator Booker, the audit found more than half of Senator Warren’s followers were also fake.

In raw numbers, nearly 2.2 million are fake juxtaposed to 1.9 million real users. Also like Senator Booker, their accounts have not updated since their announcements.

But one has updated, and the audit indicated clear deception.

As stated above, a comparison of audits conducted prior and subsequent to Kamala Harris’ announcement indicates likely deception.

Below are the results of the audit conducted prior to the announcement, also during the height of the confirmation hearings for U.S. Supreme Court Associate Justice Brett Kavanaugh.

Senator Harris’ sample indicated nearly 740,000 of her less-than 2 million followers on Twitter were deemed fake. Her audit score came in at 60%, a generous rating considering.

It’s worth noting she was called out on Twitter by Jack Posobiec, an anchor for One America News Network (OANN) on January 29. Perhaps that explains the new available data, but it’s unclear.

Below we can see the results of the audit conducted after Senator Harris announced she is running for president, which received significant journalist fanfare and coverage.

The audit, which reflects results from just 5 days ago, found a significant improvement in her score, up to 94%. That was driven largely from the number of fake followers falling by roughly 600,000.

Why Does This Indicate Deception?

There are two main ways for a user to reduce the number of fake followers on their Twitter account. First, the fake follower themselves unfollows the user, or the followed account blocks them.

But at 2.36 million, Senator Harris has not gained in followers since the announcement. She simply gained organic followers and swapped out the fake followers, leaving her overall count roughly flat.

More than a quarter of those following former vice president Joe Biden, are fake. His Twitter Audit scored him at 73%, with roughly 760,000 fake followers and just over 2 million real followers.

That certainly tops some of the aforementioned candidates, but not Donald Trump and Bernie Sanders.

In the interest of transparency, an audit of my own Twitter account came in at 98%, though I and most other users are not the bot targets you’d expect politicians’ profiles to be.