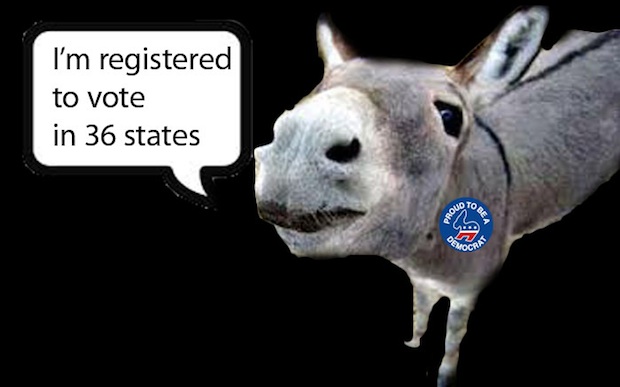 If Republicans want to stopp getting hosed, then it might be wise to turn off the spigots. A good place to start would be to acknowledge that the massive amount of voter fraud outlined in an audit by the North Carolina Elections Oversight Committee, is the Democrat Party’s election strategy, not the exception.

In a December article that went viral, we highlighted instances of mass voter fraud in Ohio, then examined the numbers to demonstrate Obama’s 2 percent state margin over Mitt Romney in the 2012 presidential election, was erased. Now, a report presented Wednesday by Elections Director Kim Strach to the Joint Legislative Elections Oversight Committee easily explains how and why North Carolina was such a nailbiter on Election Day, though Romney still flipped the traditionally-Republican Tar Heel State in the end.

The report found 13,416 deceased voters were on voter rolls in October of 2013. But because “dead voter voting” is an old trick — though for Democrats every vote counts — a new method of disenfranchising legal voters has emerged.

Voting in multiple states, as previously reported by PPD and others, such as John Fund at National Review Online, is relatively easy and Democrats target university students frequently to carry it out. Universities are home only some of the time to thousands of left-leaning college students, who are encouraged to vote both in their home-state and in the state the university is located.

Project Veritas attempted to highlight this during the election cycle. You may or may not remember this video, in which Stephanie Caballero, the director for Obama’s Organizing for America Houston office, told an undercover Project Veritas reporter how to vote in both Texas and the crucial swing state of Florida via absentee ballot.

So, that’s pretty much how it works, and it works well. Is there any wonder why Democrats were running up and down the streets of Charlotte, NC, during the 2012 Democratic Convention signing up students, or conducting  “voter registration” drives at the University of North Carolina? Let’s see how successful they were, keeping in mind these numbers are significantly lower than what is really happening, which I will address in a moment. The entire audit report is below, but here are a few caveats.

Now, of course, all of these names, addresses and social security numbers cannot be from students, and they aren’t. However, the exploitation of influential students, many of which will most-assuredly be sorry if and when the North Carolina Secretary of State’s office decides to press charges, just as Ohio’s Secretary of State Jon Husted has done, is but one tactic Democrats employ.

While voter ID laws are typically the focus of this debate, which are naturally met by false charges of racism from Democrats, the truth is that this is a much, much bigger and nationwide problem.

A total of 28 states participated in the crosscheck, but 22 states have refused to participate, meaning the NC voter fraud numbers, alone, are even higher. Because large population states, such as California, New York and Florida will not crosscheck, it is statistically likely that these numbers are far less than what is truly occurring nationwide. Leaving out missing data from 22 other states renders a report that cannot even capture the depth of this problem, a problem Democrats insist doesn’t even exist.

“In 2012, nearly 7 million ballots were cast in the general and two primary elections. Of those 6,947,317 ballots, the state Board of Elections said 121 alleged cases of voter fraud were referred to the appropriate district attorney’s office,” the “Staff” wrote.

“That means of the nearly 7 million votes cast, voter fraud accounted for 0.00174 percent of the ballots.”

Almost as ridiculous as their math skills, is their insinuation that a certain amount of voter fraud is acceptable. First, because 121 cases are being prosecuted, only means 121 cases are provable. When you are busing illegal immigrants to vote in place of the dead or otherwise valid voters who chose not to participate — both of which, we saw in Ohio using Somalis — it is wholly impossible to prosecute after the fact. Second, you cannot possibly draw a definitive conclusion about quantity when data is missing from 22 states.

But lastly, and most importantly, Barack Obama came within 90,000 votes of winning North Carolina, barely won the neighboring state of Virginia, eked out Florida by only 70,000 or so votes, and likely stole Ohio as previously investigated by People’s Pundit Daily. Add up these numbers, and suddenly they aren’t so insignificant.

Look, the Republican Party has some real challenges in desperate need of addressing. And it is always a mistake for conservatives and other Republican voters to simply blame voter fraud for losing elections. But massive voter fraud cannot be tolerated in a so-called “free” society, from the right or left. It is just sad the Republican Party is apparently too inept to take this to the American people and, if they cannot, they can forget finding the competence to begin addressing their other challenges.