HomeOpinionThank You, CNBC, for a Wonderful Evening

Thank You, CNBC, for a Wonderful Evening 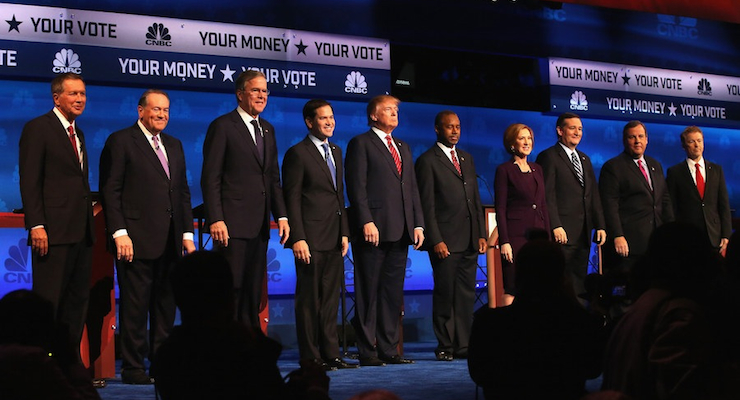 I dedicate the lead of this column to thanking CNBC for displaying its rank liberal bias in last night’s GOP presidential debate for all the world to see.

In relative terms, “all the world” is not that far off if you consider last night’s audience size compared with the network’s usually paltry ratings. The more people who saw this charade from the network’s alleged moderators the better for America.

My first reaction as this spectacle unfolded was muted outrage, shaking my head that this atrophied arm of the mainstream liberal media would show its colors so overtly, without any pretense of objectivity, much less any concern about the substantive issues it deliberately ignored.

I was surprised not by CNBC’s well-known bias but that its moderators brazenly abandoned any effort even to appear as journalists, if only for purposes of plausible deniability of their bias. Their questions, to a man (and an annoying woman), were silly, inappropriate, small and largely irrelevant to the existential threats facing America today.

Every one of them might as well have said in advance, “We are here to taunt you and turn you on one another with the pettiest and most ridiculous questions, knowing that despite our constantly harping on tolerance and bipartisanship, we have no interest in getting along with you, let alone treating you with a modicum of respect. We understand that our constituents — pseudo-journalists, after all, have constituents, too — hate every last one of you, with the possible exception of John Kasich, who gets a pass because he has admirably announced his contempt for you, as well.”

These arrogant clowns had obviously done extensive, though often embarrassingly flawed, opposition research on the candidates they wanted to single out for special abuse. There is no telling what kind of basement interns came up with these bizarre, arcane and failed gotchas, such as the effort to taint Ben Carson through some tangential association with a supposedly discredited company for which he gave several speeches.

My first reaction of mild angst was soon replaced by growing feelings of gratitude as I watched the Republican candidates, individually and together, begin to hit back — hard — at the moderators for their misconduct and journalistic adolescence. I tweeted at the time, “To some extent this is like watching a Charles Bronson movie — poorly produced, but great revenge gratification.”

Early on, Sen. Ted Cruz let them have it with both barrels, showing just why he is known as a champion debater and also why he should be regarded more favorably by skeptics.

Cruz’s on-the-fly but minutely specific smack-down of the moderators, along with a noble defense of his competitors, showed that though he’s smooth enough to sometimes sound scripted, he’s not. Rather, he is truly a gifted thinker and communicator.

Cruz said: “The questions that have been asked so far in this debate illustrate why the American people don’t trust the media. This is not a cage match. And you look at the questions: ‘Donald Trump, are you a comic book villain?’ ‘Ben Carson, can you do math?’ ‘John Kasich, will you insult two people over here?’ ‘Marco Rubio, why don’t you resign?’ ‘Jeb Bush, why have your numbers fallen?’ How about talking about the substantive issues people care about?”

Other candidates — including Marco Rubio, Donald Trump and Mike Huckabee — similarly turned the tables back on their interrogators in a glorious display of camaraderie among rivals and a textbook example of the power of recapturing the offense from preening, pretentious, progressive prigs.

So let’s thank CNBC for unwittingly setting the stage for Republicans to show what they’re made of, the seriousness of their ideas, and their sober commitment to focusing on America’s perilous problems instead of playing games.

Indeed, the main reason I’m pleased is not that the liberal media again exposed themselves. It is that Republican heavyweights showed what they can do when they work together against liberals who are destroying the country.

For a larger lesson could be learned from this if we’d just open our eyes to it and apply it. The establishment contingent always complains that the conservative wing of our party is quixotic, chasing after windmills in trying to stop Barack Obama’s madness when it obviously doesn’t have the votes.

What the establishment has never understood is that these budget battles and other fights are not a zero-sum game. We don’t have to win every battle to ultimately win the war. Democrats realize that, as they have scrapped relentlessly for policies that never seemed possible a few short years ago but were willed into existence.

The candidates showed the power of behaving like conservatives — like adults who are no longer going to tolerate the trivialization of the nation’s enormous problems and will unite against liberal cheap shot artists interested in driving the nation into further destruction.

Can you imagine the statement that could be made if the GOP establishment would quit throwing in the towel before our battles with Obama begin and the rest of the feckless Republican majorities would unify to stop Obama? Even if they fell short legislatively, they would energize their base and the entire electorate, who would see that we are not in fact saddled with a corrupt one-party system of Beltway fat cats who have no interest in taking America back. Voters would see we are dedicated to restoring sanity, prosperity, our defenses and our sovereignty.

I am allowed to dream that our side will recapture its vision — and its fire — am I not?

A Weekend In Moscow