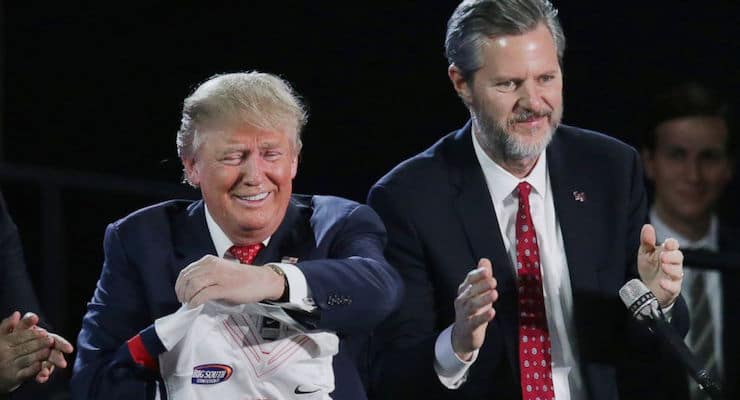 The sudden appearance of Donald Trump on the political horizon last year may have been surprising, but not nearly as surprising as seeing some conservatives supporting him.

Does Trump have conservative principles? Does he have any principles at all, other than promoting Donald Trump? A smorgasbord of political positions — none of them indicating any serious thought about complicated issues — is not a principle. Nor is cheering for himself and boasting about all the great things he is going to do as President.

Haven’t we seen this movie before? Wasn’t Barack Obama going to heal the racial divide, end the partisan bickering in Washington, have the most transparent administration ever, lower the cost of health care and let you keep your own doctor?

There was absolutely nothing in Obama’s track record that should have led anyone to think that he would even try to do any of the things he declared he was going to do. But why spoil a great vision, and soaring rhetoric, by checking track records?

It was bad enough for the voters to make the colossal mistake of being taken in by appearances and ignoring realities. But to repeat that very same mistake with Trump, immediately after the Obama administration, is truly staggering. How many pied pipers are we going to follow off to parts unknown?

At this late date, there is no point itemizing the many things that demonstrate Trump’s gross inadequacies for being President of the United States. Trump himself has demonstrated those gross inadequacies repeatedly, at least weekly and sometimes daily. Those who do not believe their own eyes and ears are certainly not going to believe any words of mine, or of anyone else.

What William James called “the will to believe” is still as powerful today as it was when he coined the phrase more than a century ago. But what is there about Donald Trump that taps into that powerful current of credulity?

The many betrayals of the voters by the Republican establishment, year after year, no doubt set the stage. And Trump is a great theatrical performer on any stage.

But is that enough? It has been enough politically to put some of the great demagogues of history in power, especially after the existing establishment has discredited itself.

The discredited Weimar Republic in Germany was vulnerable to the verbal attacks by Adolf Hitler that brought him to power. Now we know, too late, that Hitler turned out to be a bigger catastrophe — for Germany and the world — than the Weimar Republic.

Donald Trump is not an evil man like Hitler. But his headstrong shallowness and fecklessness make him a dangerous man to have in the White House, with our enemies around the world on the march, and developing intercontinental missiles that can deliver nuclear bombs.

A President of the United States has many heavy responsibilities beyond building a wall and fighting the Republican establishment.

Just the thought of Trump appointing justices of the Supreme Court, who will have lifetime tenure and make decisions, for decades, that will determine whether we will still be a free people, should sober up all who have not been irretrievably hypnotized by rhetoric or so embittered by the betrayals of the Republican establishment that they can see little else, including life and death issues.

For conservatives especially, there is finally a real choice for a change — and a sharp contrast with Donald Trump. Senator Ted Cruz has a track record that leaves no doubt as to his adherence to conservative principles. And he is as thoroughly versed in the issues facing this country as anyone who has run for President since Ronald Reagan.

Has Senator Cruz been flawless? Certainly not, and this column has more than once pointed out some of those flaws. But he has both the principles and the intellect for the job. Given the alternatives — Donald Trump and Hillary Clinton — that should be more than enough this election year.

The outcome of this Tuesday’s primaries may tell us whether the voters want to vent their feelings or to choose someone to lead the nation in a time of dangers, at home and abroad.