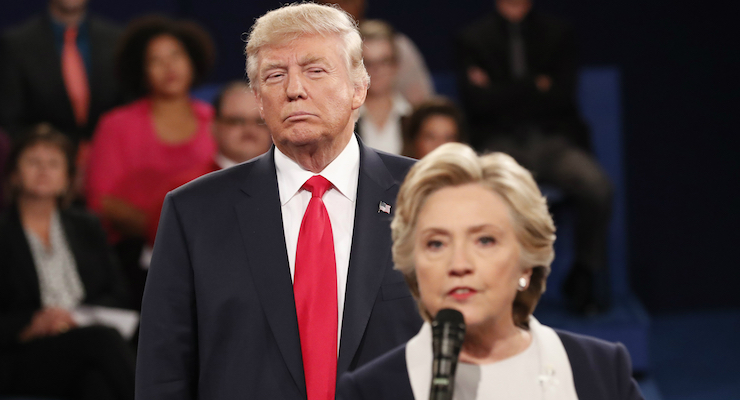 Who “won” the second presidential debate? Skip that question. Who lost it? Easy answer. The American people and the reputation of their nation.

This was no “he thinks this, she believes that” kind of conversation. Like her or not (and I like her), Hillary Clinton came to the debate — and presidential race — prepared to talk about what she wants to see happen in this country. Trump was, and remains, about maintaining his delusions of business prowess and animal attraction to women. What many early on thought was an act turns out to be his person. And that person is not well in the head.

Horse race pundits concluded that Trump steadied himself in the second debate, by which they meant he did not explode onstage. So numbed are they by this outlandish campaign, they set aside his reference to Clinton as the devil and threat to put her in jail.

Thinking Americans have given up on expecting Trump to speak coherently on his vision for the future. And why should they, seeing as he never bothered to acquaint himself with the present?

Set aside Trump’s habitual smearing of Latinos, the crude birther lies about President Obama, the attacks on the parents of a dead hero-soldier. Set aside that he didn’t answer the debate question about Aleppo, instead blurting out the word “Mosul,” while obviously not up on what is happening there.

He doesn’t know what the nuclear triad is, for heaven’s sake. Why would he know about this? Trump doesn’t read books. He doesn’t seem to read newspaper articles unless they’re about him, preferably with his name in boldface.

Regarding the tape on which Trump brags about how hot women are for him, with bonus commentary on their “tits”: The confirmation of his sexist tendencies was secondary. The stunning revelation was that a man with a shot at the presidency is so cracked.

Which isn’t news at this point. A nominee up at 3 a.m. tweeting about a beauty queen a few days after the first “presidential” debate is obviously missing a few dots on his dice.

Not unlike a courtroom lawyer, moderator Anderson Cooper sought to determine Trump’s ability to mentally process the charges against him. “You described kissing women without consent, grabbing their genitals,” Cooper said. “You bragged that you have sexually assaulted women. Do you understand that?”

Historians decades hence will hail the courage of Republican politicians who early on refused to endorse Trump at the risk of angering their base. The hall of honor would include Ohio Gov. John Kasich, Arizona Sen. Jeff Flake, Nebraska Sen. Ben Sasse and South Carolina Sen. Lindsey Graham. As for Republicans who withdrew their support after the emergence of the drooling tape and — perhaps more to the point — evidence Trump was cratering in the polls: You are zeros.

Even his supporters don’t argue that Trump is intellectually adequate to serve as U.S. president. (They say his advisers would make the big decisions.) That Trump is morally unfit to hold the highest office in the land is pretty much agreed on, as well.

Left on the table is the biggest and most troubling question mark: whether Trump is mentally stable. Evidence overflows that he is not. That someone so clearly disturbed got this far in a presidential race is absolutely terrifying.

Trump Versus Clinton: Words Versus Deeds