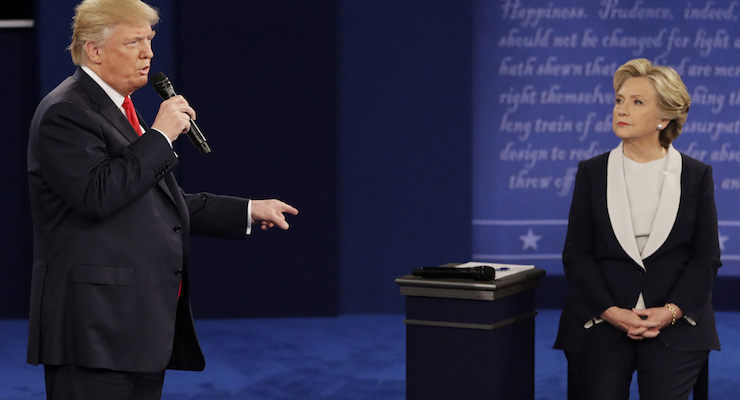 Donald Trump turned in perhaps the most effective performance in the history of presidential debates on Sunday night.

As the day began, he had been denounced by his wife, Mike Pence, and his own staff for a tape of crude and lewd remarks in a decade-old “locker room” conversation on a bus with Billy Bush of “Access Hollywood.”

Tasting blood, the media were in a feeding frenzy. Trump is dropping out! Pence is bolting the ticket! Republican elites are about to disown and abandon the Republican nominee!

Sometime this weekend, Trump made a decision: If he is going down to defeat, he will go out as Trump, not some sniveling penitent begging forgiveness from hypocrites who fear and loathe him.

His first move was to host a press availability, before the debate, where a small sampling of Bill Clinton’s alleged victims — Kathleen Willey, Paula Jones, Juanita Broaddrick — made brief statements endorsing Trump and denouncing the misogyny of the Clintons.

“Mr. Trump may have said some bad words, but Bill Clinton raped me,” said Broaddrick, “and Hillary Clinton threatened me.”

The press had to cover it. Then the women marched into the auditorium at Washington University to watch Hillary Clinton defend her behavior toward them after their encounters with Bill.

As the moderators and Hillary Clinton scrambled to refocus on Trump’s comments of a decade ago, Trump brought it back to Bill’s criminal misconduct against women, his lying about it, and Hillary’s aiding and abetting of the First Predator.

It was like a tawdry courtroom drama in an X-rated movie, a new low in presidential debates. But what it revealed is that if Trump is going down, his enemies will carry away their own permanent scars.

As Caesar said of Cassius, “Such men are dangerous.”

Hillary Clinton has never been hammered as she was Sunday night, and it showed. Knocked off her game, she was no longer the prim and poised debater of Hofstra University.

There were other signs that, win or lose, Trump intends to finish the campaign as he began, as a populist-nationalist and unapologetic adversary of open borders, globalization and neo-imperialism.

When moderators Martha Raddatz and Anderson Cooper revealed their bias by asking Trump tougher questions and more follow-ups, and interrupting him more rudely and often, he called them out.

“It’s one on three!” said Trump. And it sure looked like it.

How could the moderators have ignored that other leak of last week, of Clintons’s speech to Brazilian bankers where she confessed she “dreams” of a “hemispheric common market with open trade and open borders.”

If the quote is accurate, and Clinton has not denied it, she was saying she dreams of a future when the United States ceases to exist as a separate, sovereign and independent nation.

She envisions not just a North American Union evolving out of NAFTA but a merger of all the nations of North, South and Central America, with all borders erased and people moving freely from one place to another within a hemispheric super-state.

If this quote is accurate, Clinton is working toward an end to the independence for which our Founding Fathers fought the American Revolution.

After all, Thomas Jefferson did not write some declaration of diversity in 1776, but a Declaration of Independence for a new, unique and separate people.

Clinton dreams of doing away with what American patriots cherish most.

When the issue of Syria arose, Clinton said she favors a “no-fly zone.” Unanswered, indeed unasked by the moderators, was whether she would order the shooting down of Syrian or Russian planes that violate the zone.

Yet, what she is suggesting are acts of war against Syria, and Russia if necessary, though Congress has never authorized a war on Syria, and Syria has not attacked us.

Trump did not hesitate to overrule the suggestion of Mike Pence that we follow Clinton’s formula. He believes ISIS is our enemy, and if Syria, Russia and Iran are attacking ISIS, we ought not to be fighting them.

As of sunrise Sunday, the media were writing Trump off as dead.

By Sunday night, they were as shocked and stunned as Hillary and Bill.

What did Trump accomplish in 18 hours?

He rattled Hillary Clinton, firmed up and rallied his base, halted the stampede of the cut-and-run Republicans, and exposed the hypocrisy of liberal and secular celebrants of the ’60s “sexual revolution,” who have suddenly gotten religion where Trump is involved.

Trump exposed the fraudulence of the Clintons’ clucking concern for sexually abused women, brought Pence back into camp, turned the tables and changed the subject from the Trump tapes to the Trump triumph at Washington University.

Upshot: The Donald is alive.

While his path to 270 electoral votes still looks more than problematic, there is a month to go before the election, and anything can happen.

Indeed, it already has — many times.

The Importance of Keeping Donald Afloat