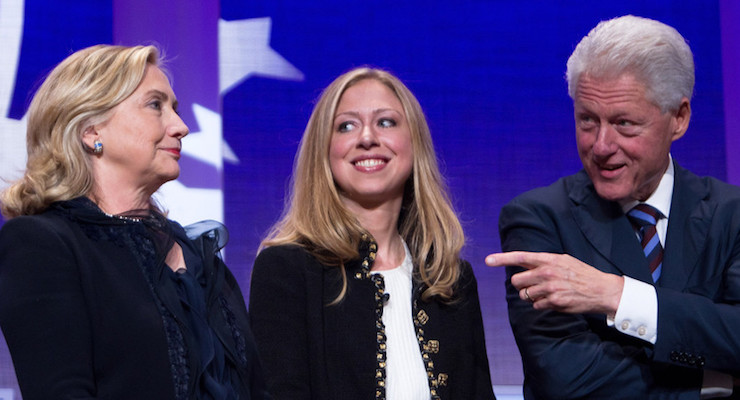 Former President Bill Clinton, right, stands on stage with then-Secretary of State Hillary Rodham Clinton, left, and their daughter Chelsea Clinton during the closing Plenary session of the seventh Annual Meeting of the Clinton Foundation, or the Clinton Global Initiative, on September 22 in New York City. (Photo: Reuters)

Oh, no! President Hillary Clinton! For four years we must follow her bureaucrats’ edicts.

It’s full employment time for trickster lawyers and other parasites who feed off complex government. Even The New York Times admits her taxes will make life more complicated. Useful people who actually produce things must kiss more bureaucrats’ rings begging for their approval.

I should probably be more careful with my assumptions, because I write this column Tuesday — well before election results are announced. As of now, I don’t know that Clinton won.

But by the time you read this, I’m sure she’ll be president-elect.

Thank goodness Republicans held the House of Representatives. Presidents have grabbed more power in recent years, but Congress still writes the laws, so the Republican House will limit the legislative damage Clinton’s socialists will do.

Unfortunately, the Senate gives consent to Supreme Court picks, so Clinton may have her way. The bettors predict Democratic control, although the race is close.

I fear that on Tuesday, freedom-loving senators like Wisconsin’s Ron Johnson lost to command-and-control bureaucrats like Russ Feingold. That means, over four years, Clinton gets to appoint as many as five big-government-loving justices. They serve for life. It may be half a century before America recovers from that.

Clinton can do a lot of damage over the next four years.

She will keep America at war — Afghanistan is already the longest war America has ever fought — 15 years and counting. She may start other wars. She will continue our march toward bankruptcy. She will stifle economic growth by pushing countless new rules.

But aside from that, cheer up! It could have been worse. Destructive ballot measures like “ColoradoCare,” progressives’ attempt to create state-run health care, were soundly defeated, I assume.

Also, thanks to our constitution, the president’s powers are limited. Around election time, people fight as if the president has unlimited power. On NBC, Chuck Todd says voters “decide who can lead this country.” No, Chuck, scientists, artists and entrepreneurs lead the country. Politicians just preside over government .

Chris Hayes talks about politicians “running the country.” Wrong again! A president doesn’t run the country, we do. A president is commander in chief. She runs just the federal government (and just a third of that, the executive branch).

Despite the destructive growth of government under Presidents Bush and Obama, free people have continued to find ways to do things better, faster, cheaper.

Despite decades of presidents like them, we live longer than ever, and we’re richer today than we’ve ever been. Even those who didn’t gain in income have gained in other ways. We now have air conditioning, music services like Spotify, fresh fruit in winter and the world at our fingertips via tiny smartphones. Low-income Americans live better than kings and queens once did. Would you change places with King George? George didn’t have antibiotics, Netflix or flush toilets.

Things got better not because of any politician, but because America has rule of law and individual freedom. Individual Americans were allowed to create — usually, without government getting in the way.

There’s no doubt that, under President Clinton, innovation is threatened. Entrepreneur George Hotz just shut down his driverless car startup, he told Venturebeat.com, because “[I] would much rather spend my life building amazing tech than dealing with regulators and lawyers. It isn’t worth it.”

But the checks and balances provided by our Constitution will stop the socialists from wrecking everything that’s good.

It’s time people realize that no president — or government — is the answer to most of our problems. We are.

Whatever Happened to Americans' Sense of Humor?