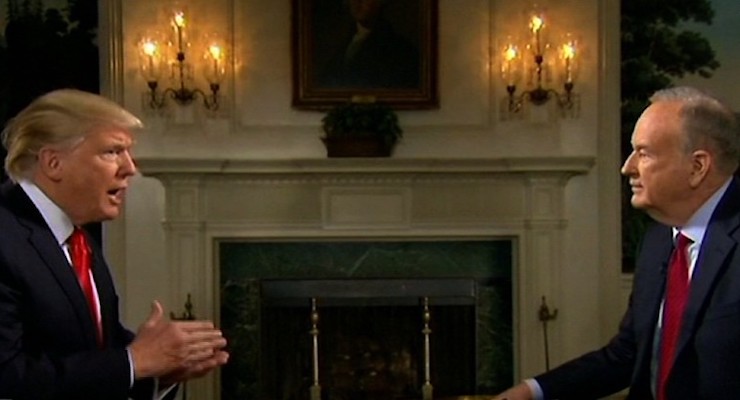 President Donald J. Trump, left, sits with Bill O’Reilly for an interview that aired during the Super Bowl on Feb. 5, 2017.

I have been pondering President Donald J. Trump’s words in the interview with Bill O’Reilly, regarding Vladimir Putin, since I heard them on the news last night. It is hard for me to come up with a reasonable, supportive conclusion to those comments.

However, drawing moral equivalence between the historical actions of the KGB/FSB and the CIA to me just does not pass the sniff test. Yes, the United States and the West employed killers during the Cold War, and we still do. Yes, we have teamed up with killers to further our national security objectives; Stalin killed over 20 million of his own citizens and he was our ally against the Nazi regime.

And yes, America has made mistakes in the past.

However, from a thirty-thousand foot level, America has been a force for good in the world. We have made the world a more safe and more free place. Our campaign against the Soviet Union really was a campaign against an Evil Empire, bent on subjugating hundreds of millions of the world’s citizens.

The bottom line is, the last twenty years notwithstanding, America has generally used violence in its overall goal to make the world a better place. The Kremlin (and the KGB/FSB) has used violence to further its own power and to stay in power.

The last three decades American administrations, since the Reagan/Bush years, have taken our country down the wrong road. I don’t think the Obama administration even cared about our national security, or even America in general, and there is much to be learned about Obama’s real agenda and how deep that rabbit hole goes.

However, Trump’s comments regarding Putin and America’s use of killers are troubling because they draw a moral equivalence between the two systems that doesn’t exist. He needs to do a better job at explaining what he meant. If he means, we need to find ways to work with Russia to destroy political Islam, then fine. If he means America is no better than the Kremlin, then I disagree strongly.

Trump, Sessions, and the Disgusting Thuggery of Asset Forfeiture