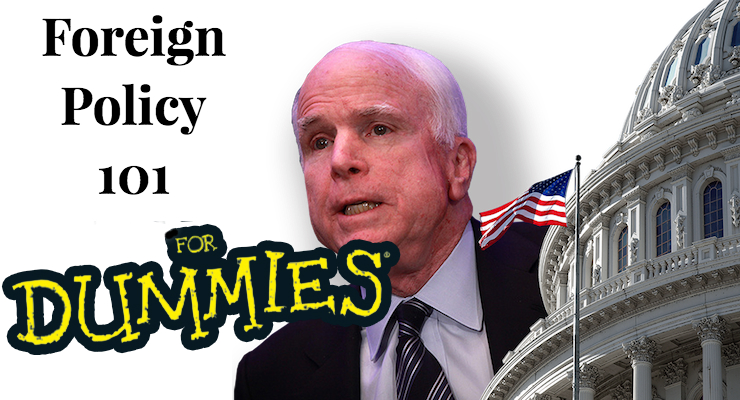 There is nothing the political class in D.C. and Big Media elites want more than for President Donald J. Trump to involve the U.S. in another war. Democrats, both on the Hill and in the media, would rather his administration get bogged down in conflict than focus their efforts on bringing about the changes he promised to domestic policy.

But it’s also true that there is no issue in which the conventional wisdom of policy displays such as wide disconnect from academia than foreign policy. Policy-makers couch foreign policy in idealistic terms of morality and liberal rhetoric (not meaning leftwing), and too many believe we should act on them.

Let’s start with the basic schools of thought, the assumptions they make, as well as how those assumptions hold up to historical and empirical scrutiny. It is only when we have a grasp on these questions that we can begin to decide which are viable and prove useful when weighing the wisdom of a particular policy.

All international relations theories seek to answer the same questions. What motivates nation-states? Why do nations go to war with each other? Do all nations generally behave the same, or do certain nations act differently than others?

If we were to answer these questions, then we just may find a better means to either limit or end war, altogether. Each of the theories or schools also make assumptions, which often determine the intellectual strength of their argument.

And there in lays the problem with non-realist theories. Each of the bedrock assumptions realists make are also the most widely accepted as a “reasonable accurate representation of an important aspect of life in the international system.”

“Sounds theories are based on sound assumptions,” John Mearsheimer, the father of offensive realism, writes in The Tragedy of Great Power Politics. We will return to offensive realism shortly because it’s best to start with human nature realism, also known as classical realism argued by Henry Morgenthau.

Mr. Morgenthau argued that nations are run by human beings, who are hardwired with a “will to power,” or the animus dominandi. This pushes them to strive for supremacy. He dominated academics from the 1940s to the 1970s, until Kenneth Waltz wrote his thesis (turned-book) on defensive realism entitled Man, the State, and War. In Theory of International Politics, Waltz continued to argue that states have a “status quo bias” and merely pursue power for survival.

States see power largely as the best mean to survive. Morgenthau explained security competition as an innate lust for power, but according to Waltz the state of anarchy played that role.

The international state of anarchy is commonly explained like this: there is no global 911 operator nations can call when another nation-state actor threatens their security. Despite the existence of the United Nations (U.N.), there is no single or collective central authority backed by force that can protect states from one another. This is the great failure of the UN, the reasons for which have been incessantly debated.

But the most solid and accepted arguments surround the basic idea that self-interests have always prevailed over idealistic desires for collective cooperation.

Enter John Mearsheimer, who made the case the goal of states is to obtain as much relative power juxtaposed to rivals as is rational. He rejected Morgenthau’s assertion that states are endowed naturally with a lust for power. States actively try to increase power simply because “that is the optimal way to maximize their security.”

He challenged Waltz on his basic idea that states desire to preserve the status quo, arguing the international system of anarchy provides too many incentives. States “look for opportunities to expand power at the expense of rivals, and to take advantage of those situations when the benefits outweigh the costs.”

We’ll get into this more in follow up articles in the series, but it’s important to touch on the more ludicrous and indefensible theories that too many lawmakers and policy-makers subscribe to in Washington.

For the record, I would consider myself an offensive realist. Waltz made incredibly powerful arguments further developing realism, and perhaps even more brilliant arguments on the concept of nation.

But ultimately, I tend to agree with Mearsheimer on the motives of nations.

Further, the empirical evidence, both historically and since his work was first published, has validated his theories.

It’s best to wrap up these theories in the same section because they all have something in common–unproven idealism and cause for optimism. Americans are optimistic, historically. Realism offers a very pessimistic view of human nature and the future, thus it’s not a difficult task for politicians to convince the public of a moral or just cause.

Perhaps the most difficult liberal theory for realists to tackle was the democratic peace theory, a centerpiece of Bill Clinton’s foreign policy doctrine, which turned out to be built on a complete falsehood. It assumes that democracies’ motives and intentions are more certain, and generally benign.

In Grasping the Democratic Peace, Bruce Russett made the argument that democracies are less likely to make war with each other, if at all. Hence, if most or even all nations were democratic, then the world would be less war-prone.

But scholars, most notable Christopher Layne, shredded this claim to pieces.

Russett used narrow definitions of conflicts to define what constitutes a war, i.e. it’s only a war if this many soldiers died and these weapons were used. The death knell came when Layne took a deeper dive into the particular reasons for prior aversions to war, and found the system of government played little to no role determining the outcome of his case studies.

Neoconservatism, which was the central ideology that governed the Bush Doctrine, is one giant “Myth of Empire” because, if John McCain and Lindsey Graham got their way, it would mean a seemingly never-ending war that only ends when the U.S. exhausts its power.

Neoconservatives believe in the Primacy of Power and want to use it to shape the world in America’s image based on the failed democratic peace theory.

As Jack Snyder explains in Myths of Empire:

The strategy of gaining security through expansion is rarely effective because the ideas underlying it contradict two of the most powerful regularities in international politics: the balance of power and the rising cost of expansion.

In our next article in the series, we’ll gain a greater understanding of what the balance of power is, strategies employed by states to increase their relative power, and further follies of the liberal doctrine.