HomePolicyConnecticut’s Metamorphosis from the Nutmeg State to the Taxnut State 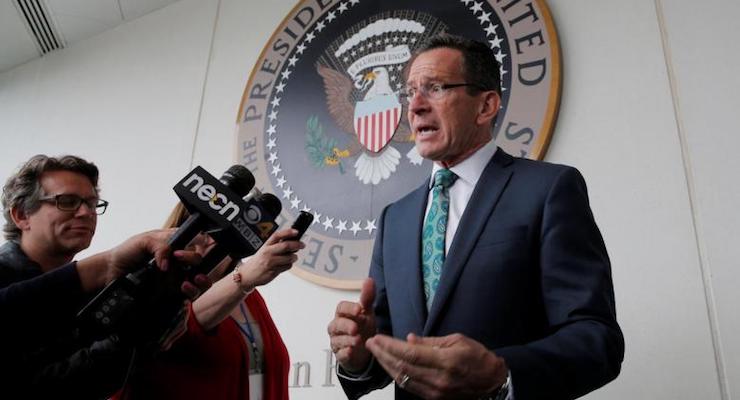 Connecticut Governor Dannel Malloy speaks to reporters after accepting the 2016 Profile in Courage Award at the John F. Kennedy Library in Boston, Massachusetts May 1, 2016. (Photo: Reuters)

To pick the state with the best tax policy, the first step is to identify the ones with no income tax and then look at other variables to determine which one deserves the top ranking.

For what it’s worth, I put South Dakota at the top.

Picking the state with the worst tax policy is more difficult. There are lots of reasons to pick California, in part because it has the highest income tax rate of any state. But there are also strong arguments that New York, Illinois, and New Jersey deserve the worst rating.

And let’s not forget my home state of Connecticut, which invariably ranks near the bottom based on research from the Tax Foundation, the Mercatus Center, the Cato Institute, the Fraser Institute, and WalletHub.

The Wall Street Journal opined yesterday about Connecticut’s metamorphosis from a zero-income-tax state to a high-tax swamp.

Hard to believe, but a mere 25 years ago—a lifetime for millennials—Connecticut was a low-tax haven for Northeasterners. The state enacted an income tax in 1991 that was initially a flat 4.5% but was later made steeply progressive. In 2009 former Republican Governor Jodi Rell raised the top rate on individuals earning $500,000 or more to 6.5%, which Democratic Gov. Dannel Malloy has lifted to 6.99% (as if paying 0.01% less than 7% is a government discount). Connecticut’s top tax rate is now higher than the 5.1% flat rate in the state formerly known as Taxachusetts.

This big shift in the tax burden has led to predictably bad results.

…the tax hikes have been a disaster. A net 30,000 residents moved to other states last year. Since 2010 seven of Connecticut’s eight counties have lost population, and the hedge-fund haven of Fairfield County shrank for the first time last year. In the last five years, 27,400 Connecticut residents have moved to Florida. …More than 3,000 Connecticut residents have moved to zero income-tax New Hampshire in the last two years. While liberals wax apocalyptic about Kansas’s tax cuts, the Prairie State has welcomed 1,430 Connecticut refugees since 2011 and reversed the outflow between 2005 and 2009. Yet liberals deny that tax policies influence personal or business decisions.

The good news is that the state’s leftist politicians recognize that there’s a problem. The bad news is that they don’t want to undo the high tax rates that are causing the problems. Instead, they want to use some favoritism, cronyism, and social engineering.

Connecticut’s progressive tax experiment has hit a wall. Tens of thousands of residents are fleeing for lower tax climes, which has prompted Democrats to propose—get this—paying new college grads a thousand bucks to stick around. …proposing a tax credit averaging $1,200 for grads of Connecticut colleges who live in the state as well as those of out-of-state schools who move to the state within two years of earning their degree.

As the WSJ points out, special tax credits won’t be very effective if the job market stinks.

Yet the main reason young people are escaping is the lack of job opportunities. Since 2010 employment in Connecticut has grown at half the rate of Massachusetts and more slowly than in Rhode Island, New Jersey or Kansas.

By the way, this isn’t the first time that Connecticut’s politicians have resorted to special-interest kickbacks.

The Wall Street Journal also editorialized last year about the state’s one-off bribe to keep a hedge fund from fleeing to a state with better policy.

Last week the Governor presented Bridgewater with $5 million in grants and $17 million in low-interest, forgivable loans to renovate its headquarters in Westport along the state’s Gold Coast.

But the bit of cronyism won’t help ordinary people.

Connecticut has lost 105,000 residents to other states over the last five years while experiencing zero real economic growth. …So here is the new-old progressive governing model: Raise taxes relentlessly in the name of soaking the 1% to pay off government unions. When that drives people out of the state, subsidize the 0.1% to salvage at least some jobs and revenue. Ray Dalio gets at least some of his money back. The middle class gets you know what.

What’s particularly frustrating is that the state’s leftist governor understands the consequences of bad tax policy, even though he’s unwilling to enact the right solution.

Mr. Malloy said that other states including New York were trying to lure Bridgewater, and Connecticut couldn’t afford to lose the $150 billion fund or its 1,400 high-income employees. …The Governor’s office says Nutmeg State tax revenues could shrink by $4.9 billion over the next decade if all of Bridgewater’s employees departed. …“We see what happens in places like New Jersey when some of the wealthiest people move out of the state,” Mr. Malloy warned. This is the same Governor who has long echoed the progressive left’s claim that tax rates don’t matter. Maybe he was knocked off his horse by a vision on the road to Hartford.

Governor Malloy recognizes that tax-motivated migration is a powerful force.

He even admits that it causes big Laffer Curve effects, meaning governments actually lose revenue over time when tax rates are punitive.

Yet he won’t fix the underlying problem.

Maybe there’s some unwritten rule that Connecticut has to have bad governors?

Mr. Malloy’s Republican predecessor Jodi Rell raised the top marginal tax rate to 6.5% from 5% on individuals earning more than $500,000, and Mr. Malloy raised it again to 6.99%. Hilariously, Ms. Rell said last month that she’s also moving her residence to Florida because of the “downward spiral” in Connecticut that she helped to propel.

And lots of other people are moving as well.

The death tax plays a role, as explained in a column for the Hartford Courant.

Connecticut spends beyond its means and, therefore, taxes more than it should. …they’re driving the largest taxpayers away. We’ve passed the tipping point beyond which higher taxes beget lower revenues… The wealthy, in particular, have decided in swelling numbers they won’t be caught dead — literally — in our state. Evidence strongly suggests that estate and gift taxes are the final straw. To avoid Connecticut’s estate tax, wealthy families are moving to one of the 36 states without one.

Where wealthy families choose to establish residency has important ramifications for Connecticut’s economy and fiscal health. The earlier these golden geese flee, the greater the cumulative loss of golden eggs in the form of income taxes, sales taxes, jobs created by their companies, philanthropic support and future generations of precious taxpayers.

The data on tax-motivated migration is staggering.

Between 2010 and 2013, the number of federal tax returns with adjusted gross incomes of $1 million or more grew only 9.5 percent here vs. 22 percent in Massachusetts, 16 percent in New York and Rhode Island, and 30 percent in Florida. Slow economic growth and ever higher taxes are both cause and effect of out-migration. …In 2008, the state Department of Revenue Services asked accountants and tax lawyers whether clients moved out of state due to the estate tax, and 53 percent of respondents said it was the principal reason. …The outflow accelerated following 2011’s historic $2.5 billion tax increase. In the following two years, Connecticut suffered a net out-migration of more than 27,000 residents who took nearly $4 billion in annual adjusted gross income elsewhere, a stunning $500,000 per household. According to the Yankee Institute, the average adjusted gross income of each person leaving tripled in the past 10 years. At an average tax rate of 6.5 percent, this represents more than $250 million in lost income tax revenue annually, which is 50 percent more than the state collected in estate and gift taxes in 2014.

By the way, just in case some of you are skeptical and think that Connecticut’s deterioration is somehow unconnected to tax policy, I’ll close with this excerpt from some academic research that calculated the nationwide impact of state tax policy differences.

We consider the complete sample of all U.S. establishments from 1977-2011 belonging to firms with at least 100 employees and having operations in at least two states. On the extensive margin, we find that a one percentage point increase (decrease) in the state corporate tax rate leads to the closing (opening) of 0.03 establishments belonging to firms organized as C corporations in the state. This corresponds to an average change in the number of establishments per C corporation of 0.4%. A similar analysis shows that a one percentage point change in the state personal tax rate a§ects the number of establishments in the state per pass-through entity by 0.2-0.3%. These effects are robust to controls for local economic conditions and heterogeneous time trends. …This lends strong support to the view that tax competition across states is economically relevant.

To be sure, the numbers cited above may not sound large.

But keep in mind that small changes, if sustained over time, grow into very big results.

In the case of Connecticut, we have a state that has suffered dramatic negative consequences ever since the income tax was imposed back in 1991.