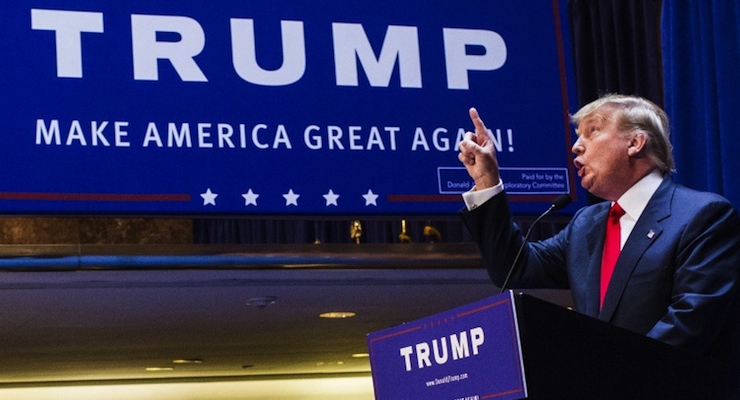 Trump This! Americans Back The Donald on Illegal Immigration

Donald Trump came under fire for comments about the criminality of many illegal immigrants, but American most voters think Trump is right. Democrats and fellow Republicans alike thought they might have found the right moment to take The Donald down, but a new poll from Rasmussen Reports suggest they’re a bit out of touch.

Yet, 53 percent of all voters — including 76 percent of Republicans — agree with Trump’s comments and say illegal immigration increases the level of serious crime in America.

“Most voters expect biased media coverage of the 2016 presidential race, and the media response to recent immigration comments by Hillary Clinton and Donald Trump is a good case in point,” says Fran Coombs, the managing editor of Rasmussen Reports.

The murder of 32-year-old Kate Steinle by an illegal alien who was taking “sanctuary” in San Francisco has now put the open borders crowd in the hot seat this week. Francisco Sanchez, the 45-year-old man who has confessed to Steinle’s murder, had been released from jail in March after San Francisco authorities didn’t honor an Immigration and Customs Enforcement (ICE) detainer request.

According to an April, 2013 survey conducted by Rasmussen, 50 percent think ending all federal funding to so-called sanctuary cities would have a big impact on the flow of illegals into this country. The same number say strong penalties against U.S. employers who knowingly hire illegal immigrants would reduce future illegal immigration a lot.

It’s same to say that these numbers are likely much, much higher at this point.

The number of voters who consider illegal immigration a serious problem and believe controlling the border is the most important thing the government can do, even if using the military is necessary, is at a four-year high.

“Concerns about border security remain the biggest threat to passage of immigration reform,” noted Scott Rasmussen, the former head of Rasmussen Reports. “It’s interesting that solutions focusing on incentives for crossing the border are seen as more effective than physical deterrence at the border.”

As they have for years, most voters (63%) think gaining control of the border is more important than legalizing the status of undocumented workers already living in the United States. While that’s up just two points from January, it is the highest level of support for border control since December 2011.

Meanwhile, Trump will meet on Friday with Mr. Jamiel Shaw, a father who recalled on the O’Reilly Factor Wednesday night seeing his 17-year-old son, Jamiel Jr., lying dead in the street where he used to play. Jamiel Jr. was gunned down execution-style by a “Dreamer.”

“I felt happy for the first time,” Shaw, an African American, said in response to hearing Trump’s comments. “When that happened, I felt good. I felt hope. This is the hope that Obama thought he was gonna get. That was false hope. This is a beautiful thing.”

The man convicted of killing Shaw’s son was an illegal immigrant who had been released from jail the day before on prior gun charges.

The survey of 1,000 Likely Voters was conducted on July 2 and 5, 2015 by Rasmussen Reports. The margin of sampling error is +/- 3 percentage points with a 95% level of confidence.