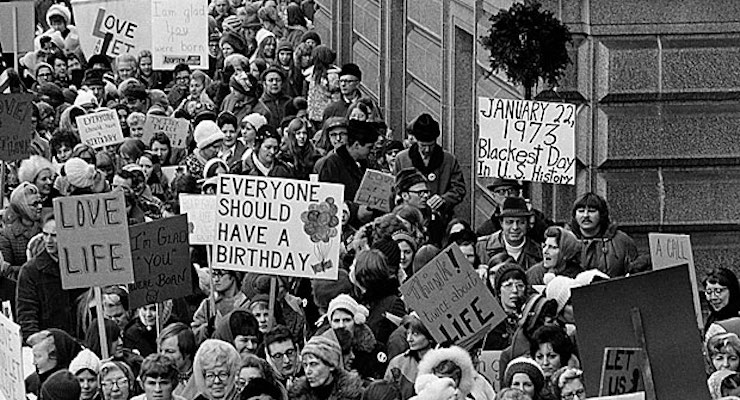 An estimated 5,000 people march around the Minnesota Capitol building protesting the U.S. Supreme Court’s Roe v. Wade decision, ruling against state laws that criminalize abortion on Jan. 22, 1973, when the Supreme Court legalized abortion with a 7-2 vote.

On the 43rd anniversary of the landmark Supreme Court decision in Roe vs Wade, which legalized abortion, public opinion on the issue has shifted significantly. As PPD has reported for years, Americans’ views on abortion are far more complicated than a simple question of whether one is pro-choice or pro-life.

According to a new poll by the Marist Institute for Public Opinion, which was sponsored by the Knights of Columbus, 81% of Americans want significant restrictions on abortion. That overwhelming number includes 66% of pro-choice supporters, which according to the poll, has a slight 51% to 44% edge over the pro-life designation. While those results run contrary to the totality of research data aggregated by PPD, the complexity of the issue underscored in the polling data is spot on.

“Contrary to the rhetoric and talking points that would have us believe that abortion restrictions are out of step with American opinion,” Patrick Kelly, Knights of Columbus vice president for public policy, said at the National Press Club in Washington, D.C. “Americans want commonsense legislation that limits abortion, and they want it by wide margins,” Patrick Kelly,Knights of Columbus vice president for public policy.”

Meanwhile, the Republican-controlled Congress, as a result of a presidential veto, failed to defund Planned Parenthood in light of the revelation that the organization sells the body parts of aborted fetuses. In January, the House and Senate passed the Restoring Americans’ Healthcare Freedom Reconciliation Act (H.R. 3762), which repeals ObamaCare, defunds Planned Parenthood (PPFA) and redirects the money to community healthcare centers that offer abortion and more comprehensive women’s health services.

Planned Parenthood, the nation’s largest abortion provider, continues to receive federal funds under the claim they are not allocated for abortions. However, the money is fungible and PPFA is primarily in the business of abortion, there’s no way to intellectually argue otherwise. As a testament to the PPFA’s and Democratic Party’s ability to rebrand, 68% of Americans are opposed to taxpayer funds being allocated for abortion, including 69% of women and 51% of pro-choice respondents. Yet, previous surveys show voters’ initial reaction is to support the organization.

Further, federal courts continue to strike down or temporarily suspend laws that ban abortion after 20 weeks, which new science indicates is a milestone for the nervous system. But, according to the Marist Poll, 61% of Americans support these laws, a number that is slightly lower than the average of public opinion surveys that have posed the question.

The poll reveals that there is quite a lot of common ground between the two designations. Sadly, the billions in the abortion industry also pay for a lot politicians’ votes. The vast majority of Americans (77%) think laws can exist which protect both the health and well-being of a woman and the life of the unborn, including 71% who consider themselves pro-choice.

Ultimately, it is generally believed that advances in science and availability of information is behind the shift in public opinion on abortion. Americans are not only making their views clear in polls and surveys, but also in their behavior. According to a CDC report released last November, there were 699,202 legally induced abortions that were reported from 49 reporting areas. The abortion rate for 2012 was 13.2 abortions per 1,000 women aged 15–44 years, and the abortion ratio was 210 abortions per 1,000 live births.

A gross number to be sure. However, the trend is headed in the direction of life.

Again, disgusting. Since Roe vs Wade, there have been roughly 58 million abortions in America. But the good news is that, too, is headed in the direction of life.