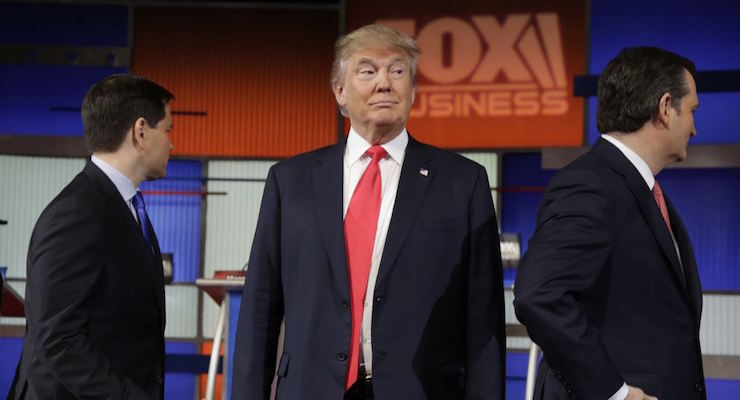 According to a new post Republican debate poll, voters say frontrunner Donald Trump brought his A-Game to South Carolina on Thursday night. The survey conducted by Gravis Marketing, a nonpartisan research firm that has been way ahead of the curve this cycle, found 41% thought Trump won the debate; 26% said the same for Texas Sen. Ted Cruz; and, 18% for Florida Sen. Marco Rubio.

The poll mirror the results of the PPD Post Republican Debate Panel, which gave Trump the edge over his closest rival Ted Cruz during the fiery and often heated exchanges. While Mr. Cruz, a favorite of tea partiers and religious conservatives in the Hawkeye State, clearly held his own in the quickly escalating birther feud with Trump, he made a critical mistake by using poll-tested attacks on New Yorkers ahead of the Feb. 1 Iowa caucuses.

Cruz clearly didn’t anticipate The Donald being able to turn the tides on him for questioning his “New York values.” In a powerful moment, Trump rebranded the attack and painted it as an assault on the city during the period following 9/11. Vividly recalling memories, Trump described the “horrific” clean up and the “smell of death” in the city.

“It was with us for months, the smell,” Trump said. “And everybody in the world loved New York, loved New Yorkers — and I have to tell you, that was a very insulting statement.”

He went on to rebut Cruz’s assertion that “not many conservatives come from Manhattan. I’m just saying.”

Trump quickly fired back that William F. Buckley came out of the Big Apple. As of Friday, Trump and Cruz are neck-and-neck in PPD’s aggregate Iowa caucus polls.

New Jersey Gov. Chris Christie, who who is surging in the Granite State, posted another solid debate performance that 7% said carried the night. The New Jersey governor is surging to the top tier in the final few weeks, just when it matters most. He also had one of the best lines of the night with his quick “you blew it, Marco” dismissal.

Ohio Gov. John Kasich and former Florida Gov. Jeb Bush–both of whom are vying for the No. 2 position in New Hampshire behind Trump–garnered 4% and 2%, respectively. Worth noting, Trump still has a large lead in PPD’s aggregate polling of the Granite State, which holds the first in the nation primary on February 9, 2016.

As the PPD Panel predicted last night, Dr. Ben Carson had a very poor night. Just under 2% (slightly below Bush) thought he won the debate. As for the moderators, Team Cavuto at FOX Business Network once again scored high marks. Of those who watched the Republican debate Thursday night, 87% said they did a good job and another 8% gave them “fair” marks. Only 3% said FOX Business Network did a poor job at moderating the sixth Republican debate.

Gravis conducted a random survey of 1,693 registered Republican voters in the U.S. regarding the performance of the candidates during the Fox Business News primary debate. The poll has a margin of error of ± 2.4%. The total may not round to 100% because of rounding. The polls were conducted using automated telephone calls (IVR technology) and weighted by voting demographics. The poll was conducted for One America News Network.

Poll: Combating ISIS Tops List of Issues Americans Want to Hear in State of the Union