The tragedy has sparked a renewed push from Democrats for stricter gun control laws.

Overall, 56.7% say placing “armed security, police and trained personnel on campus during school hours” will “do the most to reduce the number of school shootings.” That compares to just 43.3% who think “stricter gun control laws” are needed.

“I suspect this is a reaction to the tragedy last week and more than likely a temporary one, but it’s too soon to know for certain,” Rich Baris, the director of Big Data Poll said. “Support among independents and Republicans isn’t particularly firm.” 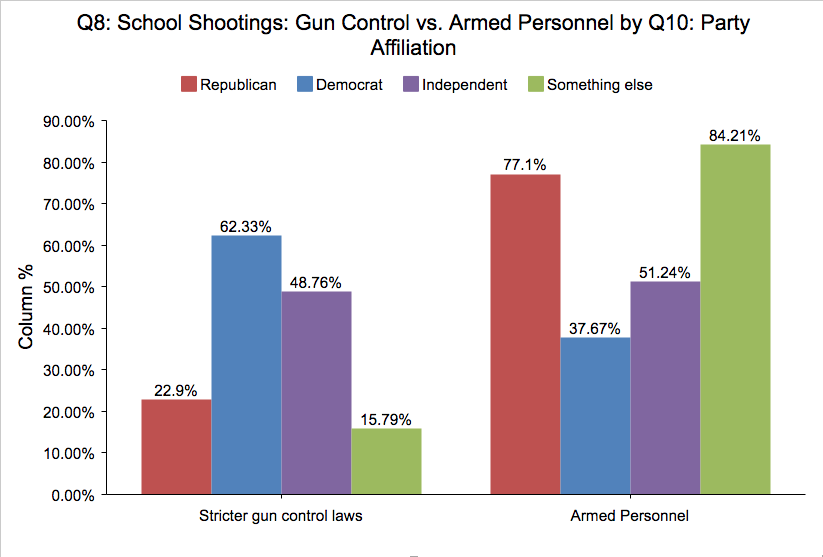 The PPD-Big Data Poll Battlegrounds conducted highly-accurate statewide surveys in 2016, including in the state of Florida. The Sunshine State Battleground released on November 6 found Donald Trump leading Hillary Clinton by 1.6%, rounded up to two points.

Can’t read the crosstabs? View them on Google Sheets!

*(Big Data Poll logo on the survey questionnaire is NOT visible to panel respondents.)

Big Data Poll conducted the mixed-mode survey of 910 registered voters in Florida from February 17 to 18, 2018. The survey has margin of error is +/- 3 percentage points with a 95% level of confidence. The mixed-mode breakdown was a total of 609 interviews conducted using interactive voice response (IVR) and 301 conducted by online survey panel (OSP).

The data are weighted for age, gender, race/ethnicity, education and income based on projected voter turnout. Partisan affiliation is derived from a proprietary likely voter model and demographic weighting, not the other way around.