The two-term senator was re-elected in 2006 with 60% of the vote and in 2012 with 55% of the vote. He has long been viewed as a moderate Democrat in the U.S. Senate, at least until now. But the two-term Republican governor is very popular, with nearly 6 in 10 (58.78%) registered voters approving of the job he is doing in Tallahassee and across the state. 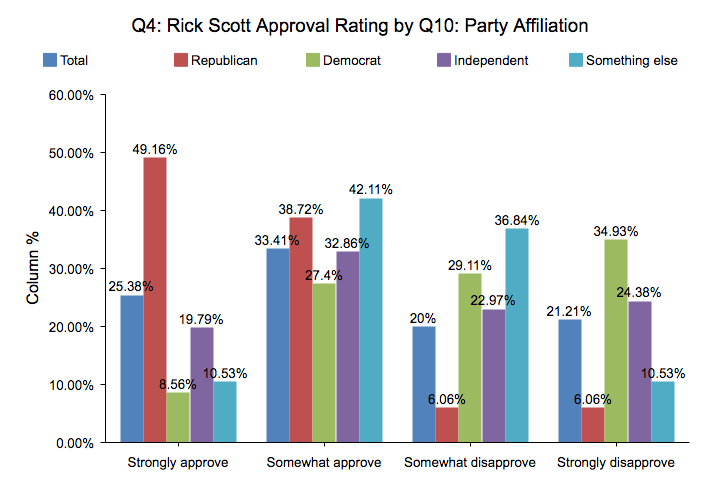 “We’ve seen a remarkable shift in Governor Scott’s image since Hurricane Irma and it continues to climb,” Mr. Baris added. “He’s by far the strongest Republican candidate in the state to take on Senator Nelson in a race we didn’t previously view as particularly competitive. If Governor Scott gets in, Senator Nelson will have a real race on his hands.”

President Donald Trump, who has urged Governor Scott to run against Senator Nelson in Florida, has a 51% (50.66%) approval rating in the nation’s largest battleground state. That includes 27.03% who “strongly approve” and 23.63% who “somewhat approve.” Forty-nine percent (49%) disapprove, including 38% who “strongly disapprove.”

As previously reported, support for gun control is soft but now on par with mental health reforms in the state. However, Florida voters overwhelmingly believe that armed guards and trained personnel on campus during school hours will do more than stricter gun control laws to prevent mass shootings in the future.

Thinking ahead to the 2018 midterm elections, the economy and jobs continue to be the top voting issue (24.1%), while healthcare is the second most important issue at 22%. In the wake of the shooting that killed 17 people at Marjory Stoneman Douglas High School in Parkland, Florida, gun control has shot up to third place with 19%.

The PPD-Big Data Poll Battlegrounds conducted highly-accurate statewide surveys in 2016, including in the state of Florida. The Sunshine State Battleground released on November 6 found Donald Trump leading Hillary Clinton by 1.6%, rounded up to two points.

Can’t read the crosstabs? View them on Google Sheets!

*(Big Data Poll logo on the survey questionnaire is NOT visible to panel respondents.)

Big Data Poll conducted the mixed-mode survey of 910 registered voters in Florida from February 17 to 18, 2018. The survey has margin of error is +/- 3 percentage points with a 95% level of confidence. The mixed-mode breakdown was a total of 609 interviews conducted using interactive voice response (IVR) and 301 conducted by online survey panel (OSP).

The data are weighted for age, gender, race/ethnicity, education and income based on projected voter turnout. Partisan affiliation is derived from a proprietary model for demographic weighting, not the other way around.