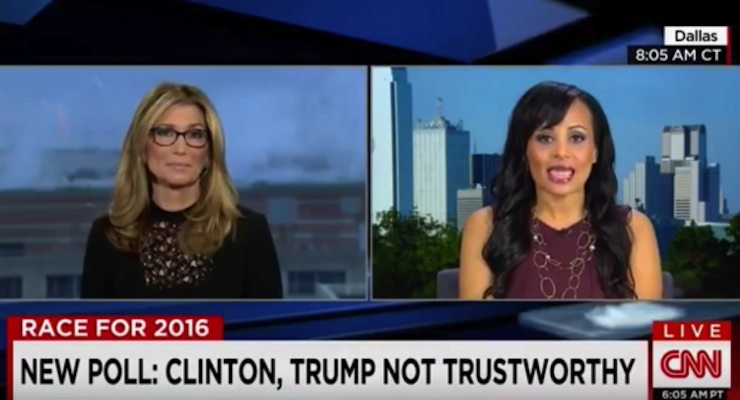 Katrina Pierson, a spokeswoman for Republican frontrunner Donald Trump, confronted CNN anchor Carol Costello on network bias during an interview Wednesday. The fiery exchange begins at the onset of the interview when Pierson calls out Costello for running footage of Trump claiming he was “destroying” Hillary Clinton in a head-to-head matchup.

Trump made the claim at an event Tuesday night prior to a Quinnipiac University Poll, which was just released early Wednesday morning, showing Clinton ahead. However, the last two of three prior polls show Trump either tied with or defeating Hillary.

Then, the interview shifted to Trump’s claim that “thousands and thousands” of American Muslims in Jersey City, N.J., were celebrating the September 11, 2015 attacks.

“No one remembers seeing thousands and thousands of Muslims celebrating in the United States after 9/11,” Costello said

“You guys changed it and made it out of quantity instead of quality,” Pierson shot back.

While PPD has held from the beginning that that Trump was likely exaggerating domestic reports or conflating international reports when he made those claims, the media have undoubtedly engaged in a full blown coverup regarding the rather concerning behavior of many American Muslims.

O'Reilly: Yes, the Left's Secret Immigration Plan is to Change the Country

"I'll Take A Bullet Before You Do": Cop Tells Panicked People in San Bernardino Attack