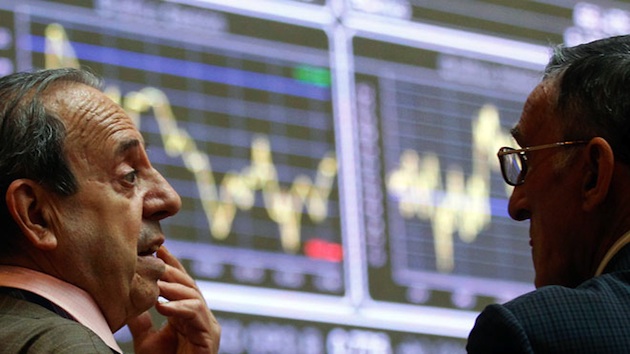 Traders take a look at the data from global markets in Madrid.Global market gains continue to be non-reflective of the poor economic reality. (Photo: REUTERS)

Global markets are set to clock in their fourth straight quarter of gains Monday, fueled only by cheap monetary policies from major central banks. Fundamental weakness in the U.S. economy, geopolitical turmoil and global economic health sent traders to the now safe-haven yen, rather than the U.S. dollar.

Even global heavyweights are admitting that the economic reality doesn’t jive with the heights global markets have climbed, as the Bank of International Settlements — which is a collaboration of the world’s most influential central banks — said Sunday that the markets are increasingly non-reflective of actual global growth.

It said there are various early indicators that suggest danger signs were building up in the financial sectors of several countries.

“In our experience the BIS does tend to have good calls on these issues, but timing the unwinding of these imbalances can take many quarters, even years,” said Chris Turner, the head of currency strategy at ING.

But the troubling data are still stemming from the U.S. economy, which unexpectedly contracted by nearly 3 percent last quarter. Now, the U.S. Federal Reserve will continue to print and pump more fiat money into the economy to stave off the largest contraction since the Great Recession, and the rate of contraction represented the largest the U.S. economy has shrunk outside of a recession.

The Bank of Japan is also pumping billions into the Asian economy every single month, causing the investor class to continuously hunt for yield.

Yet, the MSCI’s world equity index, which measures shares in 45 different countries, still rose by 0.1 percent. So far, the index has risen over 4 percent this quarter, simply due to the fact monetary policy in the major economies will obviously continue to offer investors cheap investments.

European stocks steadied after a sharp sell off last week. They were flat, with the FTSEurofirst 300 index of top European shares at 1,371.68 points.

Inflation data for June in the euro zone showed inflation holding at 0.5 percent, which represented its ninth consecutive month inflation remained in the European Central Bank’s “danger zone,” or below 1 percent.

Inflation remains elusive from the ECB’s target of just under 2 percent, and global expectations are that the central bank will keep monetary policy loose, as well.

Meanwhile, investors eyeing the U.S. markets will look for data showing some sign of an economic rebound in the world’s largest economy. This week’s busy calendar of data will leave them little time to digest data, as it includes the June non-farm payrolls report on Thursday, which is a day earlier than typically released due to the July 4 holiday.

Economists polled by Reuters expect 213,000 jobs to have been added in June, for the fifth straight month of gains above 200,000. However, despite the rhethoric, the reality is that the U.S. economy must add over 250,000 jobs monthly just to keep pace with population increases. A weaker-than-expected payrolls report could see the U.S. dollar suffer even more than it already has, leading investors to further seek out the yuan as their safe-haven.

The yen hit a five-week high against the dollar of 101.235 yen per dollar.

Globally, purchasing managers’ indices (PMIs) for manufacturing are due to be released Tuesday, while services will come out on Thursday. They are expected to show some growth, though markets will likely accept stability absent volatility, which would ease their concerns over the geopolitical tensions around Ukraine and Iraq.

“The geopolitical factor is one that it’s not easy to predict and that could keep gold above $1,300 just on its own,” said Societe Generale analyst Robin Bhar.

Brent crude oil shed 65 cents, falling to 112.65 a barrel, while U.S. crude futures fell 40 cents down to $105.34. However, oil prices have begun to come off recent highs as fighting in Iraq has largely missed the south, where most of its oil is produced and still in the control of the al-Maliki government.

Looking Inside June Jobs Report You Don't Get Too Excited