How Badly Did the Kavanaugh Collapse Hurt Heidi Heitkamp in North Dakota?

The battle over the confirmation of Associate Justice Brett Kavanaugh to the U.S. Supreme Court has helped Republicans in the short term more than Democrats. Since the stunning “thumbs down” moment by the late Senator John McCain, R-Ariz., Republican enthusiasm has ebbed-and-flowed, while Democrats consistently reported higher levels of interest.

For Republicans, the challenge this election cycle was two-fold: combating voter complacency and maintaining the more moderate wing of their coalition, specifically women, and even more specifically, Republican women.

There was no downside for the GOP. They needed to increase enthusiasm, something the controversy over the confirmation of Justice Kavanaugh clearly had the potential to do. There was almost no upside for the Democrats to do someone out of the mainstream in the final few weeks.

They needed to not derail their own enthusiasm, do nothing out of the mainstream to increase Republican enthusiasm and nothing to turn off Republican women they have targeted for at least the better half of two years. But what the media won’t tell you is that the Democrat Party made a costly mistake. The only questions remaining now are also largely two-fold: how far will it reach, and will it last until Election Day?

For incumbent Senator Heidi Heitkamp, D-N.D, the answer the first question is not good news. Considering the partisan lean of The Peace Garden State, we’d expect it to be among the first of the red states represented by vulnerable Democratic incumbents to flip.

Still, even before the controversy that led to what we are calling the Kavanaugh Collapse, the most likely scenario was for Rep. Kevin Cramer, R-N.D., to defeat Senator Heitkamp by 5 points or less. Given those current levels of enthusiasm, Republican voters were likely to make up no more than 51% of the vote juxtaposed to 27% for Democrats and 22% for independents, and it gave the incumbent a slight 4-point lead among women.

That strength came from Republican moderates and Republican-leaning independents. Turnout depending, she was on track to win at least 13% of the Republican vote and upwards of 17%. But in the aftermath of the controversy, those voters fled back to Rep. Kramer and Republican responses indicate the base will now make up a larger share of the electorate.

Worth noting, data on early voting patterns — while we always caution about reading too much into it — do seem to bear out our polling. Not that I’m shocked, and while we cannot know for whom people are voting, the regional activity does tell us about who is truly voting this cycle.

The share of the projected vote for Republicans increased to 53% and Democrats to 28%, while independents dipped to 19% and moved against the incumbent. By October 6, a whopping 60% of voters in North Dakota supported the confirmation and by a margin of 41% to 33% voters said it would make them less likely to vote for Senator Heitkamp if she voted “No” on the floor.

Voters had been evenly split at 35% on whether it would make them more or less likely to vote for Senator Heitkamp if she voted against the confirmation. 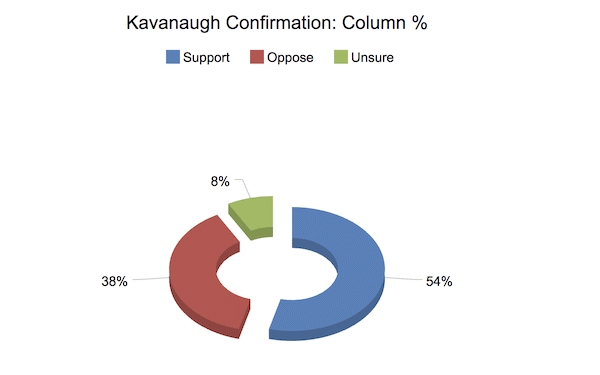 Support for the confirmation of Brett Kavanaugh to the U.S. Supreme Court among independents in North Dakota. (Source: Big Data Poll)

Above is support for the confirmation among independents, who prior had been breaking pretty significantly for the incumbent. Below is support among only independents and Republicans, who will make up roughly 72% of the vote. 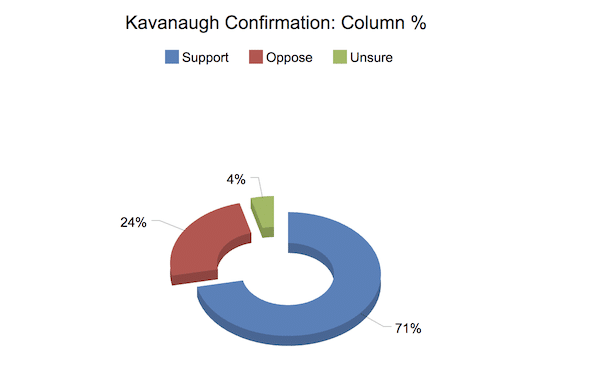 Support for the confirmation of Brett Kavanaugh to the U.S. Supreme Court among both Republicans and independents in North Dakota. (Source: Big Data Poll)

At the point this survey was conducted, Rep. Kramer widened his lead to 17 points in the most likely scenario. As a result, the PPD U.S. Senate Election Projection Model shifted North Dakota all the way from Slightly Republican to Likely Republican, albeit in succession. It’s remarkable given the model had just given Senator Heitkamp a 33% chance of victory with a margin of 2 points or less.

But that was before and this is now, a few weeks before Election Day. In the U.S. Senate, Republicans have made significant gains in Texas (Likely), Tennessee (Likely), Missouri (Leans) and Montana (Battleground), where polling has been scarce. But given the demographic and ideological similarities between North Dakota and Montana, we suspect we’re being favorable to incumbent Senator Jon Tester, D-Mont., but that is a new survey and another column.

Trump to Rally for Republicans in Montana, Arizona and Nevada on "Western Swing"