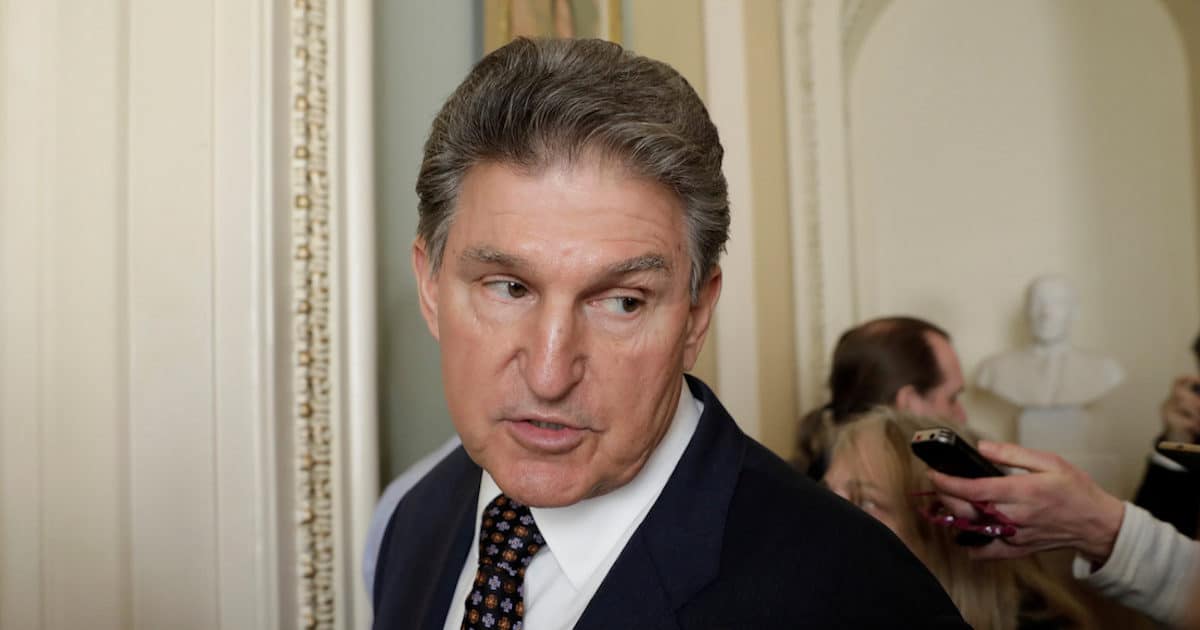 On Tuesday, Senator Joe Manchin, D-W.Va., announced he will not challenge Republican West Virginia Governor Jim Justice. Senator Manchin, who was re-elected to serve another six-year term in 2018, served as governor from 2005 to 2010.

Governor Justice, who initially ran for the mansion in the Mountain State as a Democrat and was endorsed by Senator Manchin, switched to the Republican Party. He faces multiple primary challengers and has been criticized for being a “part-time” governor and not spending enough time in the state capital.

“Serving as the Governor of this state was the greatest honor of my life,” Senator Manchin said in a statement. “Nothing made my heart swell with pride more than bragging about the wonderful state I represented.”

“I have always said that ‘public service is not self-service.’ So, when considering whether to run for Governor, I couldn’t focus just on which job I enjoyed the most, but on where I could be the most effective for the Mountain State,” he added. “Ultimately, I believe my role as U.S. Senator allows me to position our state for success for the rest of this century.”

Senator Manchin is the Ranking Member on the Energy and Natural Resources Committee, and is pushing the Republican-controlled U.S. Senate to debate and pass energy technology bills.

Seen as one of the last few true moderate Democrats in the U.S. Senate, he is generally pro-business, pro-energy and has reached across the aisle to work with President Donald Trump on several issues.

As a result of this cooperation and the Trump Administration’s economic policy, West Virginia led the nation in economic growth for the first quarter (Q1) 2019. Gross domestic product (GDP) in the state rose 5.2% in Q1 2019, while Hawaii came in dead last at 1.2%.

The Mountain State has become markedly more Republican since the Obama-era. President Trump clobbered Hillary Clinton in 2016, 68.50% to 26.43%. Senator Manchin is likely the only Democratic candidate capable of holding the seat.

Washington, D.C. – U.S. Senator Joe Manchin (D-WV) released the following statement on his decision to stay in the U.S. Senate.

“Anyone who knows me, knows that I am most proud of two things – my family and the State of West Virginia. Our state is patriotic, strong, and independent, which are characteristics I have always promoted during my time in public service.

“When I first decided to run for elected office in 1982, it was after a conversation with my father. I told him I disagreed with the actions of an elected official. My father said, “If you do not agree with his approach, then get involved and change the dialogue.” I did this by serving in the House of Delegates and the State Senate before my election as Secretary of State and then Governor of West Virginia – the best job I have ever had.

“Those who know me know how much I loved being the Governor of West Virginia. I worked the daylights out of that job. I couldn’t wait to wake up in the Governor’s Mansion in the morning, and I didn’t want to go to bed at night, because there was always more that I could do for our state. And that is what it takes to be an effective Governor: relentless effort. Working together, all of us changed the culture of this state from CAN’T DO to DONE! Attitudes changed, our financial outlook changed, and more importantly, we stood tall in what we accomplished: creating good paying jobs, improving West Virginia’s finances, and making the state competitive again. Serving as the Governor of this state was the greatest honor of my life. Nothing made my heart swell with pride more than bragging about the wonderful state I represented.

“However, in 2010, we lost West Virginia’s beloved U.S. Senator Robert C. Byrd, a legacy to West Virginia and a legacy to the U.S. Senate. Again, people from both sides of the aisle reached out to me to step up to the Senate, to carry the torch Senator Byrd had lit so long ago. That decision changed my life in ways I never imagined, and I have been honored by West Virginians to be elected as their Senator in 2010, 2012, and most recently in 2018.

“The Senate, as envisioned by our Founders, is the greatest deliberative body in the world, and, when it is at its best, Senators can transform the lives of people across America for the better. Whether that means protecting those with pre-existing conditions, ensuring healthcare and pensions for our miners, or building the roads and bridges, and broadband infrastructure that make our country competitive, we can make a difference here.

“I have always said that “public service is not self-service.” So, when considering whether to run for Governor, I couldn’t focus just on which job I enjoyed the most, but on where I could be the most effective for the Mountain State.

“Ultimately, I believe my role as U.S. Senator allows me to position our state for success for the rest of this century. As the top Democrat and Ranking Member on the Energy and Natural Resources Committee, I am going to push the Senate to take up and pass energy technology bills that invest in all-of-the-above energy that will keep our country as the world economic leader. From advanced nuclear to renewables to carbon capture utilization and storage, we are going to build an energy base that protects jobs, keeps prices low, and recognizes the reality of climate change. Not only that, I am going to do everything in my power to make sure that those advanced technologies are manufactured and deployed in West Virginia.

“Beyond energy, we will vote on crucial issues, such as protecting health care for hundreds of thousands of West Virginians, finding a tough but fair pathway forward on immigration, protecting the pensions of our hardworking miners, getting our financial house in order and many other pressing issues. As a member of the Appropriations Committee I will make sure that West Virginia gets its fair share of federal resources. On the Armed Services and Veterans Affairs Committee I will keep our military strong and honor all of those who serve. I am not beholden to the far left or the far right, and I will use my vote and my voice to bring commonsense, West Virginia values to these debates. As I have done since coming to Washington, I will work with the President to accomplish what best serves our state and our country and I will speak truth to power when I don’t agree with the path the President has chosen to take —that is what West Virginians elected me to do!

“Our state is blessed with the resources and people to accomplish anything, and I am going to use every day I have left in the Senate to make sure West Virginians have that chance. I am grateful to be a public servant from West Virginia, and I can’t wait to continue fighting to make a difference as their United States Senator.”