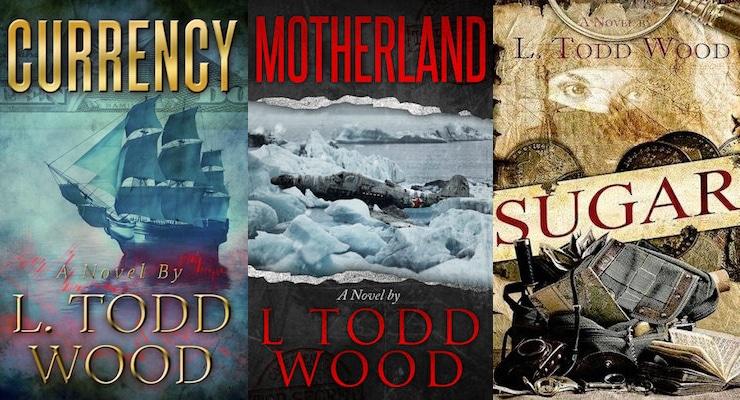 Motherland, center, is the third novel in the Connor Murray Series by L. Todd Wood. Currency, left, the first novel and Sugar, right, the second novel, both preceded Motherland in the economic, national security epic.

In a world where the lines seem blurred between truth and fiction, security expert-turned-author L.Todd Wood is quickly becoming known as the thriller novelist who can see the future. Mr. Wood will release the highly anticipated third novel in the Connor Murray Series on Independence Day — Motherland.

He provides expert analysis all over the globe, speaking to hot-button geopolitical issues affecting the world today. Wood, a modern-day renaissance man, puts his real-world experience and authority into his work, which thus far has foretold geopolitical tensions around the world, the rise of ISIS and the creation of a caliphate before they even happened. Americans are becoming increasingly alarmed about homegrown terrorism following incidents such as Ft. Hood, San Bernardino and Orlando.

“An Islamic caliphate in the Middle East is slowly taking over the world,” Wood said.

As a Special Operations pilot, Wood flew missions for Seal Team 6 and Delta Force. But now he’s on a new mission to rescue America from the destructive grip of socialist ideology that threatens its sovereignty and everything that makes this country great.

In Motherland, Connor Murray returns to fight a ghost from his past that threatens his personal safety and world peace. He is living in Israel and enjoying life when his world changes in a matter of seconds, for good. Everything he once knew and believed is challenged as he strives to prevent world domination by the Motherland.

About L. Todd Wood: A graduate of the U.S. Air Force Academy, flew special operations helicopters supporting SEAL Team 6, Delta Force and others. After leaving the military, he pursued his other passion, finance, spending 18 years on Wall Street trading emerging market debt, and later, writing. The first of his many thrillers is “Currency.” Todd is on the Editorial Board at People’s Pundit Daily and is a contributor to Fox Business, Newsmax TV, Moscow Times, the New York Post, National Review and others. He can also be heard every Wednesday at 6:30 a.m. on the Steve Gruber Show. For more information about L. Todd Wood, visit LToddWood.com.