HomeNewsPoliticsRod Rosenstein Admits No Evidence of Russia Collusion in August 2017 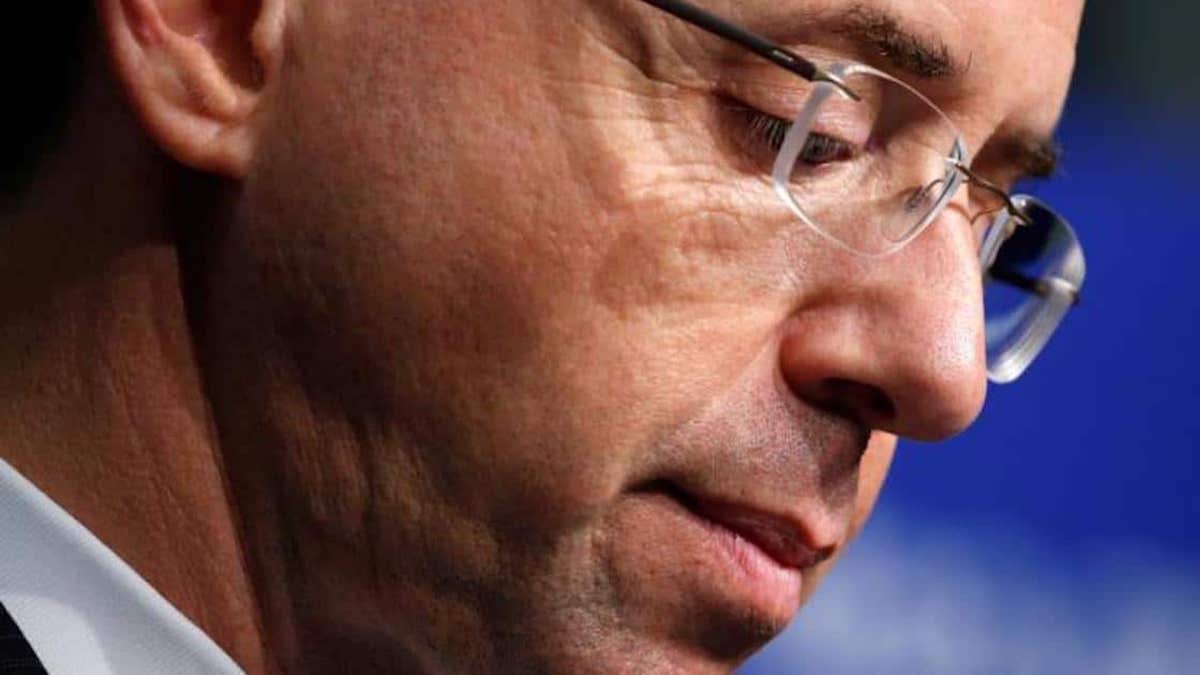 In Contentious Hearing, Rosenstein Claimed Not to Have Read FISA Renewal Applications

Washington, D.C. (PPD) — Former Deputy Attorney General Rod Rosenstein admitted on Wednesday there was no evidence of collusion by August of 2017. Despite the evidence not supporting the allegation the Trump campaign colluded with Russians to influence the 2016 election, he allowed the investigation to continue for another year and a half.

The bombshell admission came during a heated hearing before the Senate Judiciary Committee, which is investigating wrongdoing during the F.B.I.’s Crossfire Hurricane investigation that led to the appointment of Special Counsel Robert Mueller.

“The whole concept, that the campaign was colluding with the Russians, there was no ‘there’ there in August of 2017, do you agree or not?” Chairman Lindsey Graham, R-S.C., asked Mr. Rosenstein.

“I agree with the general statement,” he replied.

The concession was just one of many that came during the hearing. On several occasions, he admitted having little knowledge about the F.B.I. probe. He also through other actors under the bus, claiming that fired former F.B.I. Deputy Director Andrew McCabe “was not fully candid with me” regarding bureau proceedings.

Mr. Rosenstein also told the committee that he was not aware of the exculpatory evidence exonerating Carter Page and would not have signed the renewal of the FISA warrant if he had been.

“If you knew then what you knew now, would you have signed the warrant application?” Chairman Graham asked him.

Mr. Rosenstein at one point suggested that he was not familiar with the full contents of that FISA warrant renewal, though had earlier claimed to have read it. He later amended his testimony to claim that he had not read “every page.”

“My recollection of it, it was actually fairly persuasive,” he claimed. “It had already been approved three times. This was just a re-authorization.”

Senator Ted Cruz, R-Tx., delivered scathing remarks against what he characterized as a corrupt investigation.

“You came into a profoundly politicized world, yet all of this was allowed to go forward under your leadership,” Senator Cruz said. “That, unfortunately, leads to only two possible conclusions: Either that you were complicit in the wrongdoing… or that your performance of your duties was grossly negligent.”

Indeed, emails obtained in October 2019 show Mr. Rosenstein and Mr. Mueller were secretly in contact with one another the days before, during and after the latter met with President Donald J. Trump, and the eventual special counsel appointment.

It’s unclear whether “the boss” was a reference to then-Attorney General Jeff Sessions, or President Trump, himself.

However, the emails indicate Mr. Mueller was appointed Special Counsel after the president refused to give him the job.

“I am with Mueller. He shares my view. Duty calls,” Mr. Rosenstein wrote to Mark Filip, an attorney at Kirkland & Ellis LLP on May 16, 2017. “Sometimes the moment chooses us.” (Document Page 54)

In May 2019, Attorney General William Barr assigned U.S. Attorney John H. Durham in Connecticut to investigate the origins of and potential wrongdoings in the Russia probe. By October 2019, Mr. Durham had expanded his investigation.

In December, the Justice Department Office of the Inspector General (OIG) released a “Review of Four FISA Applications and Other Aspects of the FBI’s Crossfire Hurricane Investigation”. Legacy media incorrectly used the language in the report to claim the findings exonerated the FBI of political bias, which Inspector General Horowitz later pushed back on under oath.

In January, the Justice Department admitted there was “insufficient predication to establish probable cause” to spy on Carter Page. In response, Judge James Boasberg, the head of the FISC, penned and issued an order ruling at least two of the warrants were “not valid” on January 7, 2020.