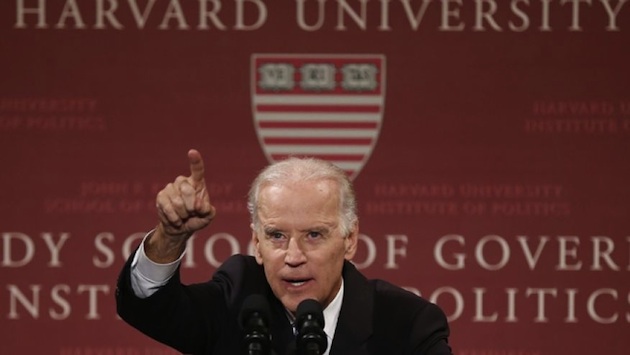 Vice President Joe Biden is renowned for his off-the-cuff gaffes, but the aspiring presidential contender’s comments this week prompted both laughs and gasps from critics and supporters, alike.

Speaking at Harvard’s Kennedy School of Government, in Cambridge, Mass., said the stable world order the U.S. has “defended over the past several decades is literally fraying at the seams right now.”

Critics of the Obama administration pounced on the vice president’s comments. Sen. John McCain (R-AZ) charged Biden with being on the wrong side of every foreign policy debate over the last 30 years, and said Obama’s foreign policy is to blame for the instability.

Biden also took and answered a question from the vice president of the student body by joking with profanity.

“Ain’t that a bitch?” Biden said. “I mean, excuse me, the vice president thing?”

But one of Biden’s statements is receiving attention from a global leader who didn’t find it funny, at all. Biden said that “our biggest problem is our allies” in Syria.

“The Turks … the Saudis, the Emiratis, etc. What were they doing? They were so determined to take down (Syrian President Bashar) Assad and essentially have a proxy Sunni-Shia war,” Biden said.

“What did they do?” he continued. “They poured hundreds of millions of dollars and thousands of tons of weapons into anyone who would fight against Assad — except that the people who were being supplied were al Nusra and al Qaeda and the extremist elements of jihadis coming from other parts of the world.”

Turkey President Recep Tayyip Erdogan was furious, denied he ever made those remarks and said Biden would become “history to me” if the adminstration didn’t retract the allegations with an apology.

“Foreign fighters have never entered Syria from our country. They may come to our country as tourists and cross into Syria, but no one can say that they cross in with their arms.”

A spokesperson for the White House said Biden spoke directly to Erdogan to “clarify” comments and apologized for “any implication” that Turkey or other regional U.S. allies had intentionally supplied or helped in the growth of the Islamic State and other extremists groups in Syria.

Biden’s ill-conceived comment couldn’t have come at a worse time.

Last week, Turkey’s parliament finally approved military operations across the border in Syria and Iraq and for foreign troops to use Turkey’s territory. Turkey, a NATO ally, has key strategic air fields that are pivotal to the U.S. military presence in the region, thus Obama’s strategy “to degrade and ultimately destroy ISIL (ISIS or the Islamic State).”

According to the White House, just one day earlier Biden and Erdogan spoke on the telephone about ways the two countries can work together to restore security and stability to the region. Turkey, is expected this week to further define the role it will play in the U.S.-led coalition against the Islamic State terror army, who have captured large territories within Iraq and Syria and, in some areas,are now butting right up against the Turkish border.

Multiple reports have now confirmed what the Pentagon and known and argued all along, which is that the air campaign against the Islamic State is not stopping the terror army’s advances. In the Syrian town of Kobani, upwards of 400,000 residents and refugees are trapped, while 70,000 refugees have already fled across the border into Turkey. Kurdish fighters confirmed the terror army still advances despite airstrikes and, as of several days ago, were surrounded as ISIS militants seized the town with artillery.

PPD has not been able to Rooz Bahjat, a senior Kurdish military officer, who asked the media to tell his story.

“Tell the world what is happening” Bahjat said. “This could be a massacre if no help arrives.”

With U.S. ground troops off the table — even though the American public now approves of sending them to defeat the Islamic State — the Obama administration has backed themselves into a corner and must now rely upon allies in the region to inevitably confront forces on the ground.

Turkey is but one of the regional powers Obama’s strategy depends upon, yet Biden’s comments insulted them all.