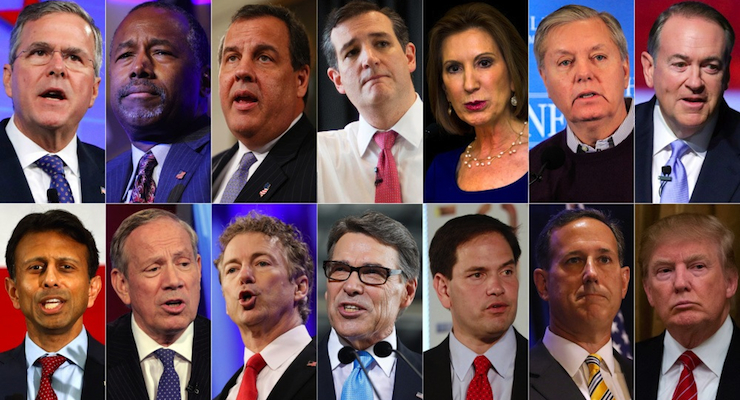 It seems that almost every day a new GOP candidate enters the race in hopes of earning the presidential nomination. Just earlier last week, Ohio Gov. John Kasich became the latest GOP candidate to throw his hat in the ring. The 2016 field is considered fairly wide open, as no real party leader or contender has emerged since Mitt Romney’s failed bid for the White House in 2012. Now, the amount of candidates running for the Republican nomination has reached an all-time high. The idea of a wide open field has enticed an unprecedented amount of candidates, all with hopes of emerging as the front-runner.

The list of official Republican candidates at 2016.republican-candidates.org seems endless, while including both a wide-range of candidates with real potential to earn the nomination as well as a few who have no real chance. Familiar, more well-known GOP candidates are running as they did in past elections, including Mike Huckabee, Rick Perry, and Rick Santorum. The field isn’t limited to politicians as most political party nominations tend to be, with real estate mogul and reality star Donald Trump, former CEO of Hewlett-Packard Carly Fiorina, and Dr. Ben Carson all hoping their private sector backgrounds resonate with primary voters.

Candidates are hailing from an assortment of political backgrounds, as well. Former and current governors, senators, and representatives are all vying for the coveted GOP nomination. Candidates come from a wide range of ideologies, with moderate conservatives running alongside Tea Party members and even potential independent candidates.

So what does this record-setting size field mean for the GOP nomination?

The massive field ensures a roller coaster of emerging and drowning candidates — as we still have a long time until the elections take place and anything can still happen — particularly with the first debate right around the corner. The leading 10 candidates based on five national polls, which seems hard to even decipher at this point, will have the opportunity to get their message out participating in the GOP primary debates beginning with the Fox News Republican Debate in early August. A few of the candidates are shoe-ins for a spot on the main stage, including Jeb Bush and Marco Rubio, while some surprise poll leaders — i.e. Donald Trump — and late entry Scott Walker will most assuredly find their way to the stage.

Voters horse-race watchers are also sure to experience plenty of surprises with such a wide-open field, notably and currently the most recent surprise is the sky-rocketing national poll numbers enjoyed by Trump. The Donald captured attention with a series of rants over the last month, including his comments on illegal immigration and pledge to build a massive wall along the U.S.-Mexico border. The debates will be an opportunity for candidates to make an impression in the public’s mind and gain significant ground on their competition, just as Mitt Romney did leading up to his 2012 nomination.

The unprecedented field will provide a wide-selection of candidates to choose from, most with a real chance to earn the bid. This stands in contrast to the Democratic nomination, which consists of Hillary Clinton slipping yet still dominating the early primary polls.

But regardless of national polls, odds-makers or debate polls, only one candidate can secure the GOP nomination and with the field as wide-open and diverse as it is, the race is sure to be exciting at the very least.

Hillary Clinton to Testify at Benghazi Select Committee in October

Israeli Spy Jonathan Pollard Set to Be Released in November