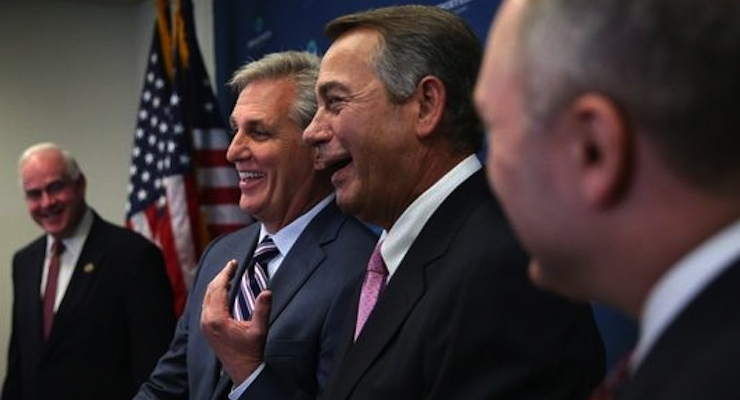 Washington is Divided Between the Evil Party and the Stupid Party

President Obama and the Democrats despise this small bit of fiscal discipline, which was created as part of the 2011 Budget Control Act (BCA). They’re aggressively seeking to eviscerate the law, particularly the sequester enforcement mechanism. And since they believe in bigger government, their actions make sense.

Republicans, by contrast, claim to believe in smaller government and fiscal responsibility. So they should be in the driver’s seat on this fight. After all, the BCA is the law of the land and the spending caps – assuming they are not changed – will automatically limit overspending in Washington. In other words, the BCA fight is like the fight over reauthorizing the corrupt Export-Import Bank. Republicans can win simply by doing nothing.

Seems like a slam dunk win for taxpayers, right?

Not exactly. With apologies for mixing my sports metaphors, the Republicans are poised to fumble the ball at the one-yard line. Which would be a very depressing development. In this interview, I explain that preserving the spending caps should be the most important goal for advocates of limited government.

And you’ll see that I also explained that fighting for good policy today is necessary if we want to avoid huge fiscal problems in the future.

But that doesn’t seem to matter very much for a lot of Republicans. Let’s look at what other fiscal policy experts are saying about this issue. Writing for Reason, Veronique de Rugy of the Mercatus Center explains that the key to good fiscal policy (including tax cuts) is to have effective and enforceable long-run spending restraint.

If lawmakers want big tax cuts, there will need to be commensurately greater levels of spending restraint. The difficulty, of course, is to persuade politicians to implement such spending constraints and actually stick to them in the long run.

That’s basically the same message I shared yesterday. President Obama, however, has threatened to veto the budget and shut down the government if Congress doesn’t agree to bust the current spending caps. And plenty of Republicans, either because they also want to buy votes with other people’s money or because they’re scared of a shutdown fight, are willing to throw in the towel. The battle isn’t lost, at least not yet, but it’s very discouraging that this fight even exists. Controlling discretionary spending should be the easy part.

After all, if politicians balk at the modest requirements of the BCA, what hope is there that they’ll properly address entitlements? As Veronique notes, those are the programs that are driving America’s long-run fiscal crisis.

…the only realistic way to limit spending growth to 2 or 3 percent per year is to reform the fastest-growing programs in our budget, or the so-called entitlements.

What makes this issue especially frustrating is that we know sustained spending restraint is possible. Nations such have Switzerland have shown how spending caps produce very positive results. But that requires some commitment for good policy by at least some people in Washington. And that may be lacking. In a column for the Wall Street Journal, Steve Moore takes a closer look at how GOPers are poised to throw away their biggest fiscal victory of the Obama years. Let’s start with an excerpt illustrating how the BCA and sequestration have worked.

…the Budget Control Act helped slam the brakes on Mr. Obama’s first-term spending spree. …In 2009 the federal government accounted for nearly a quarter of the American economy, 24.4%. That fell by 2014 to 20.3% of GDP.

He’s right. I’ve shared similar numbers showing how Obama’s spending binge was halted. And that’s led to the biggest five-year reduction in the burden of government spending since the end of World War II.

But fiscal sobriety needs to be sustained. Deciding to have “just one drink” at the big spender’s bar is not a good way to stay on the wagon. And Steve shares some bad news on this issue.

Congress and the White House are quietly negotiating a deal for the new fiscal year that would bust the spending caps that have brought down the deficit. Breaking the caps yet again—this would be the third violation in four years—is lousy policy. …the GOP is reportedly forging a compromise with Mr. Obama that would raise the caps by $70 billion to $100 billion. …What’s worse, the deal would likely raise the spending caps permanently, meaning…nearly $1 trillion…over the next decade.

By the way, there’s a reason why this sounds like déjà vu all over again. Republicans already agreed to bust the spending caps at the end of 2013. That was an unambiguous victory for Obama. And now it may happen again. Steven discusses the implications of this looming GOP surrender.

The mystery is why Republicans are so ready to throw away their best fiscal weapon… Liberals hate the sequester because it squeezes their favorite programs, from transit grants to Head Start. But it is the law of the land. President Obama can do nothing to circumvent the sequester—unless Republicans in Congress cave in. …Busting the spending caps will only reverse progress toward a balanced budget, fatten liberal social programs, and confirm what many tea-party voters have been shouting for years: that Republicans break their promises once elected.

For all intents and purposes, the battle over BCA spending caps is a huge test of GOP sincerity. Do they really believe in limited government, or is that just empty rhetoric they reserve for campaign speeches.

P.S. Some Republicans argue that they favor smaller government, but that the sequester is “unfair” and the spending caps are too “harsh” because the defense budget is disproportionately affected. It’s true that the defense budget is being capped while most domestic spending (specifically entitlement programs) is left unconstrained. But that doesn’t mean the nation’s security is threatened. Defense spending still grows under these laws and our military budget is still far bigger than the combined budgets of all possible adversaries.