HomeNewsPoliticsDemocrats’ Organized-Crime Ring Will Do Anything to Keep Power, Stay Out of Prison

Democrats’ Organized-Crime Ring Will Do Anything to Keep Power, Stay Out of Prison 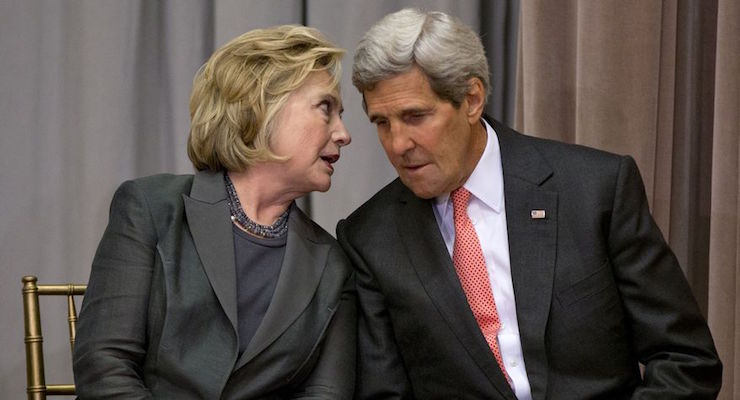 Secretary of State John Kerry speaks with former Secretary of State Hillary Rodham Clinton during the groundbreaking ceremony for the U.S. Diplomacy Center, Wednesday, Sept. 3, 2014, at the State Department in Washington. Kerry hosted five of his predecessors in a rare public reunion for the groundbreaking of a museum commemorating the achievements of American statesmanship. (Photo: AP/Carolyn Kaster)

When the end came for Russian President Boris Yeltsen, as the Russian economy was crumbling and there was no support left for his leadership in the Duma, one of his main concerns was protecting himself and his family from prosecution for corruption. That is why he appointed Vladimir Putin, an extremely loyal subordinate whom he could trust with his secrets, someone who would not immediately contact prosecutors and hound his family even after he died. Someone who would not go after the money secreted away in the Caymans.  Someone who would let sleeping dogs lie.

This is exactly the situation we have with the current political environment in the United States as the 2016 election season nears its conclusion.

The party in power has shown itself to be nothing more than a massive organized-crime syndicate that has used the levers of power to persecute the political opposition and line its pocketbooks and bank accounts with the taxpayers’ money. From John Kerry sending millions to his daughter’s non-profit, to Hillary Clinton shaking down the State Department’s clients for money, to public employee unions spiking their pensions, the corruption is complete across all levels of the Democratic Party and their hold on the executive branch.

But I think this rabbit hole goes much deeper. We are now into corruption that damages the national security of the United States in an existential way.

Every day there is a new “secret” deal revealed where the Obama administration betrayed America with its desire to give the world’s real Islamic State, the Islamic Republic of Iran, the nuclear bomb, along with hundreds of billions in dollars, secretly flown to Tehran in the dead of night.

Hillary Clinton sold 20 percent of America’s uranium to the Russians for money.

The appeasement and downright enabling of the Islamic jihadist agenda by this administration will be written about in the history books. I suspect, when the cover is taken off the rabbit hole, we will be astounded with what has actually been given away, leaked, stolen and ripped off by Obama and his minions.

I hope President Trump will prosecute the illegality he finds when he takes office. To not do so would be a travesty of justice and set the precedent for the end of the Republic.

Of course, Obama may pardon all the main offenders but the crime syndicate is huge. He can’t pardon everyone. We at least have to find out what happened even if the key players don’t go to jail.

Hillary cannot be allowed into the White House. This time she will take much more than the furniture.