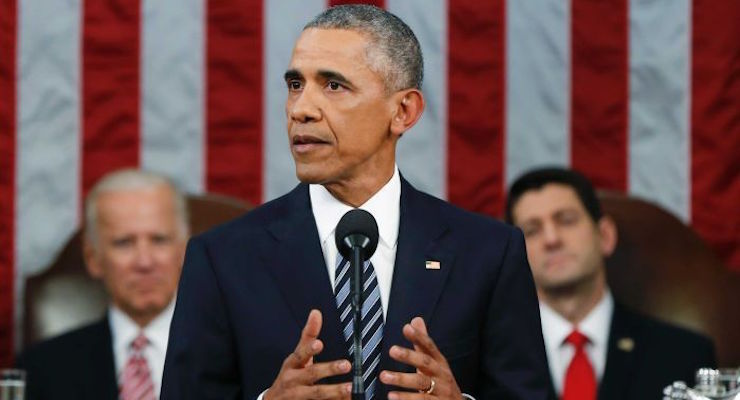 The Republican-controlled House of Representatives joined the U.S. Senate in dealing President Barack Obama the first veto override of his presidency. The House voted 348-77 and the Senate 97-1 on Wednesday to override President Obama’s veto of a bill permitting families of September 11 victims to sue Saudi Arabia.

The vote marks the first time Congress could successfully override a veto during Obama’s presidency. Sen. Harry Reid, D-Nev., the outgoing Senate minority leader, was always able to block votes that would’ve resulted in an override, effectively protecting President Obama from legislative embarrassments, particularly during his time as majority leader.

The lone “no” vote in the U.S. Senate came from Sen. Reid. Worth noting, even though he was holding an event only 20 minutes away from the Capitol at 9 a.m., Hillary Clinton’s vice presidential running mate, Virginia Sen. Tim Kaine, was not present for the vote. The floor vote began in the Senate around noon.

The bill gives victims’ families the right to sue in U.S. court for any role that certain actors within the Saudi government may have played in the September 11, 2001 terror attacks. Fifteen (15) of the 19 hijackers were Saudi nationals and, as a result, the bill “amends the federal judicial code to narrow the scope of foreign sovereign immunity by authorizing U.S. courts to hear cases involving claims against a foreign state for injuries, death, or damages that occur inside the United States as a result of a tort, including an act of terrorism, committed anywhere by a foreign state or official.”

President Obama vetoed the bill after the House passed Senate bill 2040 (S.2040), known as the Justice Against Sponsors of Terrorism Act,  or JASTA, ignoring threats from the president and Riyadh. The Saudi government vowed to pull billions of dollars from the U.S. economy. In a last-ditch effort to stop the override, the president wrote a letter to Senate Majority Leader Mitch McConnell, R-Kty., and Sen. Reid, warning the bill would be used by other countries to justify the creation of ways to target “U.S. policies and activities that they oppose.”

“As a result, our nation and its armed forces, State Department, intelligence officials and others may find themselves subject to lawsuits in foreign courts.” Mr. Obama wrote in a letter on Tuesday.

Mr. Obama further said the legislation will damage U.S. foreign relations with Saudi Arabia and other nations. However, Sen. Cornyn called the arguments made by Mr. Obama “unpersuasive.” He said the bill only applies narrowly to acts of terrorism that occur on U.S. soil.

“This bill is about respecting the voices and rights of American victims,”Sen. John Cornyn, R-Texas, said.

“It’s very simple. If the Saudis were culpable, they should be held accountable. If they had nothing to do with 9/11, they have nothing to fear,” said Sen. Charles “Chuck” Schumer, D-N.Y., who cosponsored the bill with Sen. Cornyn.

So, what role did the Saudis play in the worst attack on U.S. soil since Pearl Harbor?

That remains unclear and open to discussions, but the relatives of Sept. 11 victims had been urging the Obama administration to declassify and release U.S. intelligence that allegedly discusses possible Saudi involvement in the attacks. In July, a 28-page 2002 congressional report on the September 11, 2001 terror attacks was released Friday and it indicated some of the hijackers had ties to people in the Saudi government.

The report cited the reason for a “limited understanding” of Saudi Arabia’s role and financing of terror groups as an unwillingness to investigate “due to Saudi Arabia’s status as an American ‘ally.’” It also revealed that in 2002–only a year after the deadliest terror attacks in U.S. history–the Federal Bureau of Investigation (FBI) had numerous leads indicating ties between Saudis in America and some of the hijackers, specifically the two that took control of Flight 77, which crashed into the Pentagon.

Further, it links associates of the hijackers and Saudi Arabian Prince Bandar bin Sultan, the former longtime ambassador to the United States. In a phone book found on al-Qaeda operative Abu Zubaydah, who was captured in Pakistan in 2002.

The bill also “amends the federal criminal code to permit civil claims against a foreign state or official for injuries, death, or damages from an act of international terrorism. Additionally, the bill authorizes federal courts to exercise personal jurisdiction over and impose liability on a person who commits, or aids, abets, or conspires to commit, an act of international terrorism against a U.S. national.”

Democrats' Organized-Crime Ring Will Do Anything to Keep Power, Stay Out of Prison