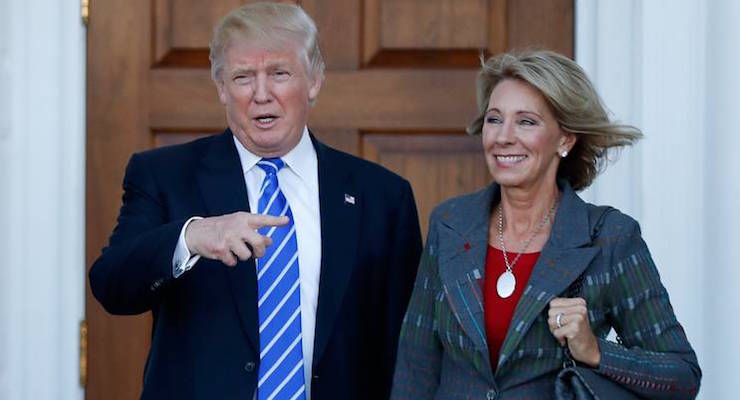 President-elect Donald Trump calls out to the media as he and Betsy DeVos pose for photographs at Trump National Golf Club Bedminster clubhouse in Bedminster, N.J., Saturday, Nov. 19, 2016. (Photo: AP)

President-elect Donald J. Trump announced Wednesday he will nominate Betsy DeVos as secretary of the U.S. Department of Education (DOE). Ms. DeVos, a leader in the choice movement, education advocate and philanthropist, has pushed for national education reform for more than two decades.

“Betsy DeVos is a brilliant and passionate education advocate,” President-elect Donald J. Trump said in a statement. “Under her leadership we will reform the U.S. education system and break the bureaucracy that is holding our children back so that we can deliver world-class education and school choice to all families. I am pleased to nominate Betsy as Secretary of the Department of Education.”

Ms. DeVos, Michigan native, spent more than two decades helping unprivileged children gain quality education and advocating for school choice. She is the chairwoman of the American Federation for Children, whose mission, according to their website, is to “improve our nation’s K-12 education by advancing systemic and sustainable public policy that empowers parents, particularly those in low-income families, to choose the education they determine is best for their children.”

Ms. DeVos comes to the role with considerable chair and executive experience, and like the president-elect, has an impressive business background. She is also chair of the Windquest Group and has also served on the board of national and local charitable education groups, including the Kennedy Center for the Performing Arts, American Enterprise Institute, The Philanthropy Roundtable, Kids Hope USA, and Mars Hill Bible Church.

“I am honored to accept this responsibility to work with the President-elect on his vision to make American education great again,” Ms. DeVos said in a statement. “The status quo in education is not acceptable. Together, we can work to make transformational change that ensures every student in America has the opportunity to fulfill his or her highest potential.”